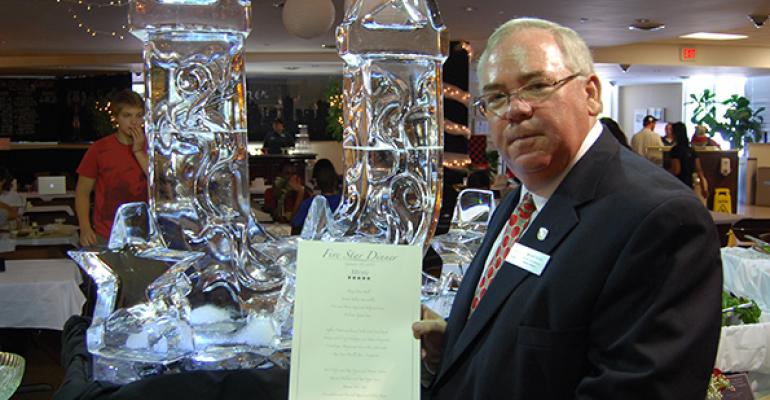 Retiring Floyd Made his Mark on Georgia, Campus Dining

J. Michael Floyd set to retire from UGA after 40-year career in college foodservice that started at Valdosta State in 1973

Mike Floyd went to Valdosta State in 1973 planning to become a history teacher, but a job as a line runner in the cafeteria his freshman year led to a long and distinguished career in college foodservice. After more than 40 years, Floyd is set to leave the only field he’s ever known on Aug. 31 when he retires from his job as associate vice president for auxiliary services at the University of Georgia.

“I’m ready to take a step back,” says Floyd, who was hired as Georgia’s director in 1986. “I compare it to climbing a mountain. I did a lot of backpacking when I was younger, and it’s tiring, challenging and aching and sometimes you fall down, but when you get to the top, there’s this great view and you think you’ve accomplished something. But it’s the journey that really matters. And you know, you look out and discover there are a lot more mountains out there in life.”

During his nearly 30 years at Georgia, Floyd almost literally built the university’s dining program. Every single dining operation on the Athens campus has been built or renovated during his tenure, “some renovated two or three times even,” he says.  “When I came, there were discussions to eliminate the seven-day meal plan because so few people bought them. Now, we have 90% on it. I’m proud of the marketing and promotion we’ve done.”

Floyd cites the 1996 Olympics as another career highlight. Athens hosted rhythmic gymnastics, volleyball and soccer events over a 10-day period that saw his department serve 225 catered events and 280,000 meals, he says.

But beyond all that, including an amazing 81 Loyal Horton Awards from NACUFS at both Valdosta State and Georgia, Floyd said his greatest memory of the job will always be helping students make Georgia their second home.

“I received a letter from a dad several years ago,” Floyd says. “He wrote me and wanted me to know his daughter didn’t want to come to college, but said, ‘They make mac and cheese like mom did.’ His wife had recently passed away and the daughter was having a hard time, but the mac and cheese made her feel comfortable going to college.

“That’s what college foodservice is all about. That one letter, to me, defines what the job is.”

Before the end of Floyd’s freshman year at Valdosta State, he’d been promoted to supervisor of that cafeteria and then manager of the entire student workforce. He graduated with a degree in history, then briefly went to work for Morrison Foodservices before returning to Valdosta State as its foodservice director in 1979, at the age of 23. The school was a member of NACUFS and Floyd credits the association for the opportunities, networking and education that led to his long career. He’s served in numerous capacities, including regional president, and in 1994 he was honored with the Richard Lichtenfelt Award for outstanding service to NACUFS on a national level. He also won an IFMA Silver Plate award in 2002.

In 2012, Floyd was promoted from executive director at Georgia to vice president of auxiliary services, where he oversees not just foodservice, but also operations of the bookstore, campus transit, golf course, parking services, printing services, card services and vending. He says the expanded role has helped make stepping away easier.

“My first love will always be foodservice, but this other component has allowed me to broaden my experience and allowed me to step back from something I’ve done for so long and I’m actually ready to retire now. If I had not made that transition, I’m not sure I’d be ready.”

Jeanne Fry was promoted to executive director of foodservice in 2012 and Floyd says the team he’s leaving has also made it easier for him: “Our team led by Jeanne is doing an outstanding job and it’s a comfort factor knowing I’ve got great people here who are going to take it to the next level.”