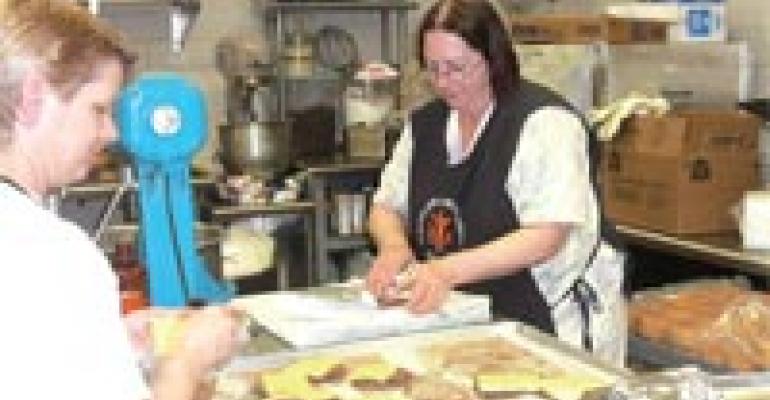 When Environmental Club students at Winona (MN) High School suggested that the district reduce its carbon footprint and get greener four years ago, few would have imagined that it would result in “buffburgers” and “buffdogs” on the lunch line — items made with bison meat produced by a local rancher/processor. But that was one of the major consequences of the decision, says the district's nutrition services director, Lyn Halverson.

“Our first reaction was, ‘Do we try to do organic?’” she says. “But we soon found that that was rather expensive.”

A better way, Halverson suspected, would be to explore local sourcing of product irrespective of whether it was organic. After all, if something could be purchased from a local supplier who produced it nearby, that would save transportation costs while also helping out a local business. That was not only environmentally friendly but community-minded as well.

It was with this in mind that Halverson attended a local food forum a year after the Environmental Club resolution. “I decided to put myself out there and let it be known that I was interested in working with local farmers,” she recalls. The forum yielded little immediately, but it did give her some contacts.

She began working with the local Farmers Community Development Association, which initially led to a deal with a local apple farm to purchase its undersized fruit.

But the local sourcing initiative made its biggest mark this year with a deal with the Rockie Hill Bison Farm, located only a few miles from town. Halverson worked with Rockie Hill co-owner Gail Griffin to introduce the product to students at Winona Middle and High Schools. A marketing campaign featuring posters and buttons heralded the coming of “buffburgers” and “buffdogs” to the cafeteria.

The debut was more of a success than anticipated, as the kitchen ran out of bison products before the last lunch period was even served, prompting an emergency supply run. Each school received two cases, but the middle school ran out of its allotment halfway through its lunch service.

Halverson put the buffburgers and buffdogs on the regular a la carte menu rotation in the spring and plans to keep serving them next fall. She says the burgers sell better than the dogs. “They have a natural casing that kids are not as familiar with,” she explains. “Also, they taste a little smokier than commercial hot dogs.”

The burgers are sold on the a la carte line for $2.50 and the hot dogs for $1.50. The district, with a 33-percent free-reduced rate, depends on a la carte sales and the bison products have helped boost participation somewhat, Halverson says. They typically sell about a hundred on the day it's on the menu at the 1,300-student high school, and about 75 at the 1,150-student middle school.

But the more important thing, as far as Halverson is concerned, is that the students are getting a nutritionally excellent protein with less fat than the typical beef pattie. And she is supporting a local business at the same time.

The bison meat is one of a range of products featured on the Minnesota Farm-to-School website (www.mn-farmtoschool.umn.edu) developed by Halverson in partnership with the University of Minnesota. The highly user-friendly site not only helps match farmers with customers but includes recipes and nutrition analysis for specific dishes using the local products. It even offers promotional materials and tips for holding tasting events.