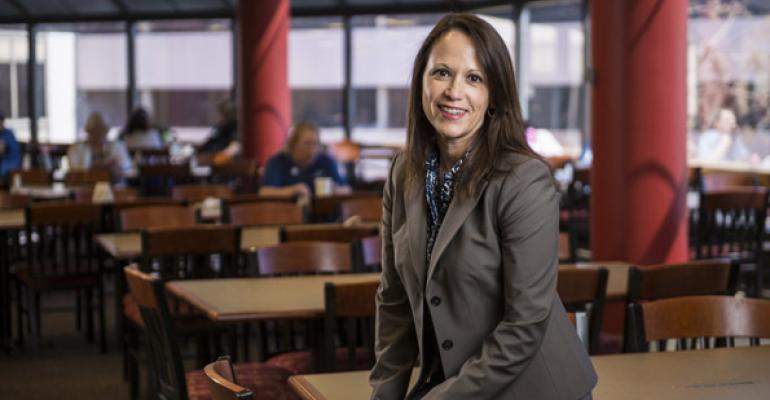 <p>Lisette Coston has never been intimidated by a challenge. Her latest will be finding time for both her regular job at St. Francis and her role as AHF president.</p>
Operations>Management

Lisette Coston begins every morning the same way. Her alarm sounds at 4:30 and she quickly heads out the door for a CrossFit workout at the hospital fitness center. Her bag is always packed the night before, because the “super organized” fitness fanatic doesn’t have time to waste.

The executive director of support services for St. Francis Health System in Tulsa, OK, not only heads the nutrition and foodservice operations for the 983-bed healthcare institution with four hospitals and seven retail operations, but also environmental, laundry and transportation services. She oversees almost 200 foodservice employees and another 300 in the other departments.

“For me to manage all that, I have to be extremely organized,” says Coston, this year’s 2014 IFMA Silver Plate Award winner in the Healthcare Category. “And I’m also very competitive. I love to run, swim and bike. Personally, I’m very driven.”

Professionally, too. The director with so much already on her plate will become the president of the Association for Healthcare Foodservice (AHF) this June. “Trust me, with my competitive nature and organizational skills, I’m already making notes and thinking about how I’m going to do it all,” she says.

Through her 26 years at St. Francis, Coston has never been afraid of a challenge. She’s currently juggling five different renovation projects, excluding the just finished revamp of the kitchen and dining space at Laureate Psychiatric Clinic and Hospital. The space was expanded to accommodate the hospital’s Eating Disorder program, but the real challenge was maintaining foodservice at the functioning hospital while work was ongoing the past six months.

Periphery space at the fitness center used for cooking demos was turned into a makeshift kitchen, offices morphed into store and refrigeration rooms and classrooms became the new dining area. Temporary flooring was placed over carpets, trash rooms were created and all the while participants at the neighboring fitness center barely noticed. “It was a learning process for us and what my group did to come up with that was really clever,” Coston says, later adding: “Sometimes you hear, ‘Gosh, I don’t know if we can do that.’ To me, there’s nothing we can’t do. I like challenges.”

Perhaps her biggest challenge came in 2007, when the St. Francis South campus transitioned from contract management to self-op. Within a two-week period, the new director of the facility oversaw a kitchen renovation, dining room expansion, the addition of a physicians lounge and the implementation of room service.

“It was 24-7 construction and I probably worked five weeks straight without a day off,” Coston recalls. “It was an unbelievable time, but it was great.”

Room service has since expanded to the entire system, including a special pediatric menu, and patient satisfaction scores have increased across the board while costs and waste have decreased.

Coston started at St. Francis as an assistant manager in a production area in 1987 and quickly worked her way up the management ranks and was promoted to foodservice director in 1998. A few years ago, she left the hospital to work for U.S. Foods as manager of customer operations, but returned to her old spot four months later in 2011. She loved the job, but not the travel.

“I am extremely thankful and honored they took me back,” says Coston, who was promoted to executive director in December of 2012 and has since added the other support services to her list of responsibilities.

It is all a childhood dream come true. Coston knew from a young age she wanted to become a dietitian after babysitting for one when she was just 14 or 15. She graduated from Oklahoma State with a bachelor’s degree in nutrition and later added an MBA to better understand the business side of foodservice. Now she’s excited to give back to the association that helped her along the way.

“When I first became foodservice director, I thought ‘Oh my goodness, all the responsibility is on me,” she says. “I knew I had to be really engaged with what is happening in the industry and that’s how I got started with HFM (AHF’s predecessor). So much of what we learn is outside these walls. If you stay within your organization, you’re not going to grow. You learn by getting involved and I’m excited about becoming president of AHF.”

One On One: How Chicago Public Schools is feeding every student
Apr 02, 2021