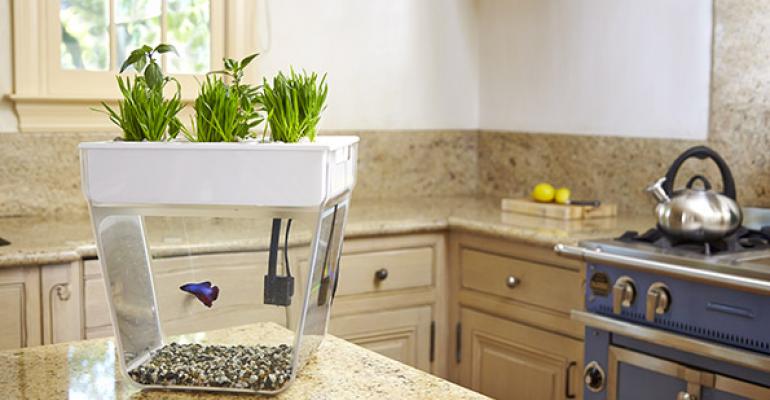 <p>Back to the Roots&#39; Water Garden is a self-cleaning fish bowl that grows food.</p>
Operations>Management

Back to the Roots and Sodexo are donating 2,000 ready-to-grow products to classrooms to teach kids about where food comes from.

It’s no secret that large food corporations have been receiving negative press lately. On the other hand, startup companies are the “it” media darlings. So is it possible for the two to work together to feed children?

That’s exactly what’s happening with a newly formed partnership between global food management giant Sodexo, the world’s 19th largest employer, and Back to the Roots, a Bay Area-based startup that boasts a roster of just 14 employees.

Like so many startups, Back to the Roots was formed in college when co-founders Nikhil Arora and Alejandro Velez starting growing mushrooms from recycled coffee grounds in the kitchen of their fraternity. The rest, as they say, is history. Arora and Velez had an idea of “undoing food,” that is to make it simpler, better for you and to know exactly what you’re putting in your body. The company is financed through Angel Investors, including some big names in food like James White, CEO of Jamba Juice, and other startup leaders like Aaron Batalion, co-founder of Living Social.

What started as a college let’s-see-if-we-can-do-it trick turned into Back to the Roots, which produces ready-to-grow products like the Mushroom Farm, from which, you guessed it, you grow mushrooms out of a box. Other ready-to-grow products include the Garden-in-a-Can and the Water Garden. The premise behind each product is that with only minimal effort, you can grow food yourself and see the cycle of food to plate.

It would almost seem antithetical for Back to the Roots to get involved with Sodexo, but the two found common ground in feeding and teaching children.

Back to the Roots, which has its base selling its products in retail outlets, found that people loved to engage with their products. The company was being bombarded with photos of people growing food using their ready-to-grow line. So Velez and Arora started a grow-one-give-one campaign, based largely on the success of another one of their Angel Investors, Blake Mycoskie, founder of Toms Shoes, which donates a pair of shoes to a child in need for every pair purchased.

For every photo of a person using their ready-to-grow product posted on Back to the Roots’ Facebook or Instagram accounts, the company donates a growing kit to the elementary school of the poster’s choice. “To date, it’s been our most successful campaign,” Velez says.

That campaign turned into the baseline for the partnership with Sodexo. Starting this October, some 2,000 growing kits will be distributed to classrooms in districts where Sodexo manages the foodservice.

“This is hopefully going to make a real impact where it’s not about growing food outside where nobody is taking care of it, but you’re actually empowering kids to grow food inside so there is actually accountability because you can see food grow. It’s not about in the summer it’s the garden guys [taking care of things] but here you get to see the whole process. It creates this feedback method,” Velez says.

For Sodexo, teaching students was the main goal behind the partnership. “Our whole goal is to enhance the learning environment by bringing solutions to the table that will help improve that quality of life in the classroom but also to be able to teach kids to understand where their food comes from,” Richard Hill, vice president of brand marketing for Sodexo, says. “Even though we aren’t teachers in the classroom, we still have an obligation to help educate and pass on the knowledge that we have.”

Along with each donated kit, Sodexo has created a curriculum to help teachers educate students on food, where it comes from and healthy eating.

“We sat around a room and said, ‘Can we have half a million pounds of food be grown in classrooms and can we have that done in the next 12 months?’” Velez says. “That was a bold statement on our end to go out there and say real food, real impact.”

While the food grown in classrooms won’t find its way into cafeterias, Hill hopes teachers and foodservice employees can work together to create taste testing events for the students who actually help grow the food.

“We offer teaching and assistance,” Hill says of the foodservice team’s part of the program. “If the teachers don’t want the additional support that a dietitian or nutritionist might be able to add, that’s fine. We’re making it so simple that you don’t need those degrees to be able to deliver the content. However, when a kid sees a chef in a chef’s hat, they get so excited. Teachers are so overtaxed and overworked that oftentimes they welcome somebody coming in because it gives them a little bit of a break.”

“One of the key pieces that we’re trying to educate on is traceability of food,” Hill continues. “This is a great way to plant the seed because as we look to ready-to-eat products that are in development, one of the challenges is that the USDA has new regulations that have made it very challenging to provide foods to kids that they will eat. So finding quality food that they would like that is also very clean…we don’t want the science to be on the nutrition label; we want the science to be what we teach with the agricultural piece.”

That leads to the second part of the partnership. After the success of the ready-to-grow products, Back to the Roots expanded into the ready-to-eat category, specifically into cereal. The company created a cereal with only three ingredients. Each ingredient has the farmer who grew that ingredient listed on the box.

“When we work with large manufacturers, there’s a huge value in that, but development of new products takes time because of their systems,” Hill says. “Whereas small organizations like Back to the Roots are so nimble and innovative that we can hopefully jumpstart a lot of products into the market that not just Sodexo kids but kids around the country can eat. And hopefully then cross those products into the retail world so they can get the same quality products at school at home.”