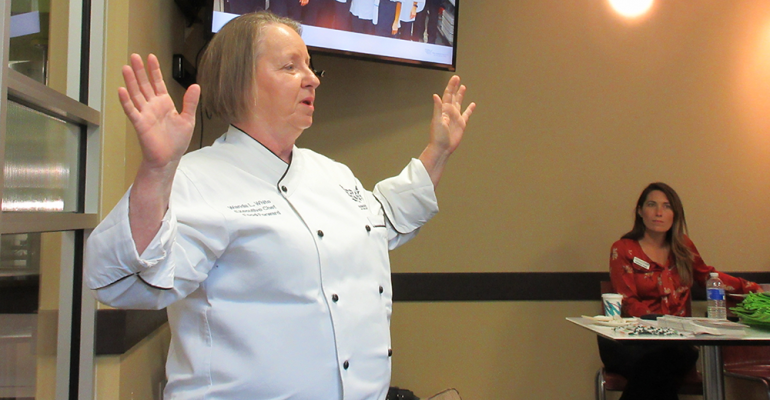 UAlbany Dining/Sodexo
Chef Wanda White of the Humane Society conducted the workshop for 14 UAlbany Dining culinary staff over two days before the start of the school year.
Operations>Management

A Humane Society Forward Food workshop held right before the start of the fall semester has significantly enhanced the meatless cooking repertoire of the culinary staff at University at Albany, the State University of New York (UAlbany), which is managed by Sodexo. The hands-on training was led by Executive Chef Wanda White from the Humane Society and it taught 14 UAlbany chefs and cooks to prepare a variety of non-meat items ranging from breakfast foods to desserts in order to satisfy the growing number of vegetarians and vegans attending the university.

“We definitely have seen an uptick in student requests for plant-based menu items,” explains Lauren Mancuso, marketing and communications director for UAlbany Dining. “We want to make sure we’re providing what students want, and this offered us a great opportunity to provide more training for our culinarians, who are very eager to stay on trend in terms of what consumers are looking for.” 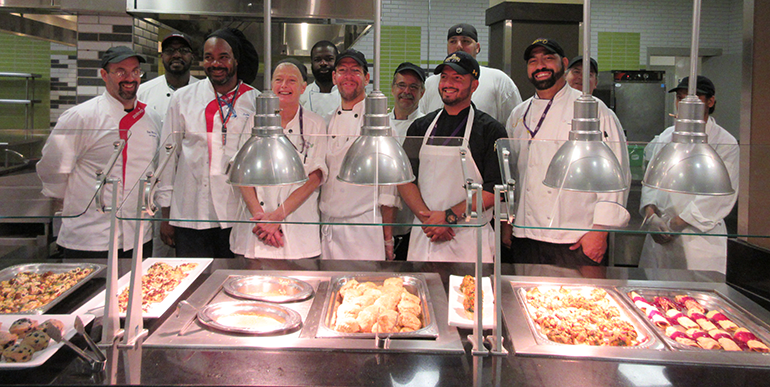 Graduates of the workshop pose with some of the culinary creations.

The program ran for 8.5 hours on each of the two days, during which the culinarians learned to prepare more than a dozen dishes, including meatless versions of familiar items such as meringue without egg whites, Buffalo wings without chicken and shepherd’s pie without lamb. The process also included instruction about substitutes for animal proteins, some common, such as seitan and lentils, and some more unusual, such as jackfruit and aquafaba, which is the liquid drained from canned chickpeas.

In fact, aquafaba seemed to be the hit of the workshop, with several chefs expressing amazement at the liquid’s ability to mimic egg whites.

“You take the aquafaba and whip it with some sugar and vanilla into a meringue,” marvels catering chef Jeffrey Rayno. “You can add it to souffles, or just bake it as a meringue. And you can make it sweet or savory. I played around with it, adding rosemary and garlic, which I served with a vegan chili as a sour cream substitute. It was exciting.”

Other innovations included making tacos using jackfruit in place of pulled pork, Buffalo wings with cauliflower replacing the chicken and shepherd’s pie using lentils instead of meat. The chefs and cooks even learned how to create a nacho cheese sauce out of potatoes and carrots.

Both Sodexo and its resident district manager for UAlbany Dining Kevin D’Onofrio, have worked previously with the Humane Society and its Forward Food program, D’Onofrio in his previous position as director of the culinary group at the United States Military Academy at West Point, N.Y. 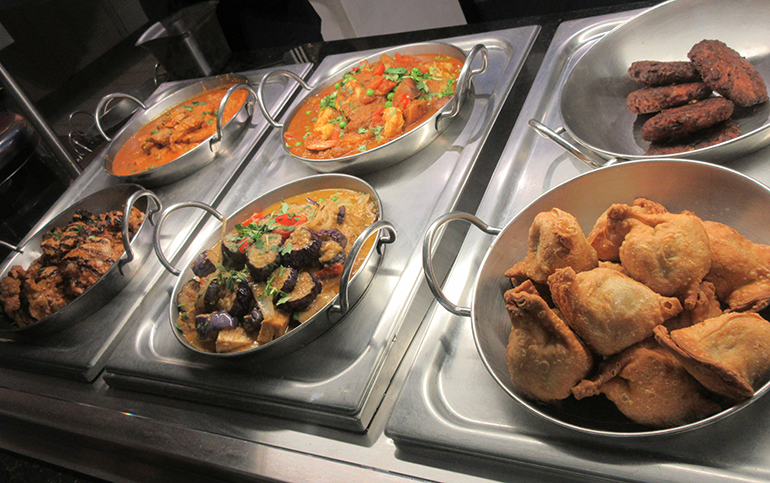 Dishes the culinarians learned to make included meatless variations of common items like Buffalo wings, shepherd’s pie and even meringue.

“The Humane Society had a lot to offer in plant-based menuing,” he says. “I engaged them six months ago to do something with us, and to our surprise they had just begun working with Sodexo as well, so we’re actually ahead of the curve on this.”

Forward Food was created about four years ago after Harvard University Dining Services requested the Humane Society’s help with vegan menus. It now consists of three discrete programs. One is the culinary experience workshop that was conducted at UAlbany, but there is also a two-hour version designed for elementary and secondary school kitchen staffs and a nutrition workshop developed for dietitians.

Rayno, who has had experience creating vegan items in restaurants and at catered events, says he was surprised how far vegan foods have come since he became a chef.

“When I started, vegan and vegetarian food was really bland,” he offers. “Grilled vegetable plates and the like. Now, ingredients have come a long way, like vegan cheeses that really taste like cheese. We learned that plant-based foods really taste good and ‘sing’ on the plate.”

D’Onofrio says vegan items will gradually be added to UAlbany residence hall menus as the year progresses and UAlbany Dining will look at how these items can be sold on the retail side as well. Meanwhile, dietitians will be educating students about the nutritional value of the new dishes, and the chefs will receive additional training during the winter break in January.

Stephen Pearse, UAlbany’s executive director of university auxiliary services, says the training is a great opportunity for the chefs to expand their culinary skills and knowledge.

“The proof will be in what the students think of the results,” he adds. “So I am excited to see what ends up on the plate!”