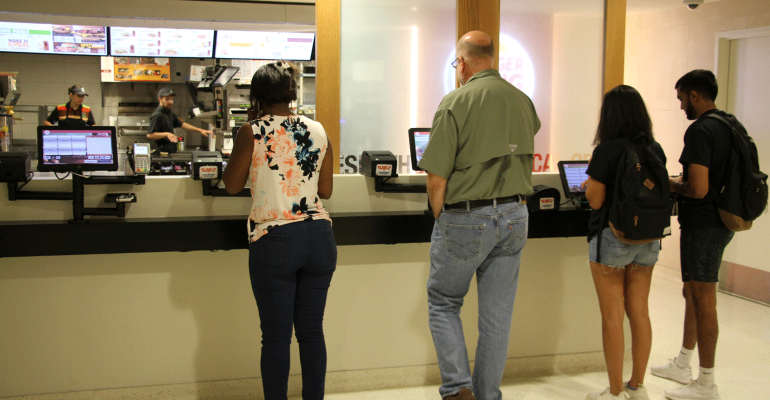 The digital revolution has arrived at several retail dining venues at both branded and in-house concepts, making it easy for students to order.

“Some students would rather just order from a kiosk rather than interact with an employee,” says Chris Ruiz, marketing pro at the University of North Texas. That’s a reality today, so the dining team has installed 30 self-service kiosks across campus at both branded concepts and in-house brands.

The idea coincided with the construction of a new student union built to address a bigger enrollment—about 50,000 students.

“We had huge lines, so we decided to add kiosks,” says Shohreh Sparks, operations director. “The students love them and it has definitely helped our business. Our experience has been that the kiosk locations are so much more popular than the registers; they would rather not talk to anybody and just place their own order.” The screens on the kiosks make ordering easy and intuitive, and “one of the nice things is having the capability to put a photo for each item…kiosks can show them exactly what they’re ordering,” Sparks says.

Other advantages include the ability to upsell additional menu items through the process (as unobtrusively as possible) and also the ability to track sales in a more efficient way than ever before. And the kiosks can alert students to best-selling items, suggesting meals based on previous sales.

The project, in its initial stages now, has been running smoothly thanks to some technical groundwork laid by Keith Kellermeyer, UNT’s cross functional IT support coordinator, who built a lot of the technology from the ground up, customizing the kiosks to fit each concept.

For example, the Chick-fil-A kiosk is programmed to say “My pleasure,” just like the human employees at that concept. Incorporating in-house brands for ice cream and tacos meant showing various toppings for a build-your-own experience that’s very visual, Kellermeyer says. Currently, Kellermeyer is looking into mobile apps that can be used with the kiosks, but for now, students can go to a website on their phone’s browser and place orders from anywhere on campus, or just walk up to the screen to place their order.

Within a five-year timeline, there’s the possibility that UNT will go cashless for all dining operations.

“The kiosks have the potential to allow people to walk up and make cash deposits into their accounts, so the university won’t have to deal with cash,” Kellermeyer says.

“It has multiple advantages,” Sparks adds. “We wouldn’t have to do late-night deposits, and most kids don’t carry cash. The speed of service would be faster, so there are a lot of advantages to going cashless.”