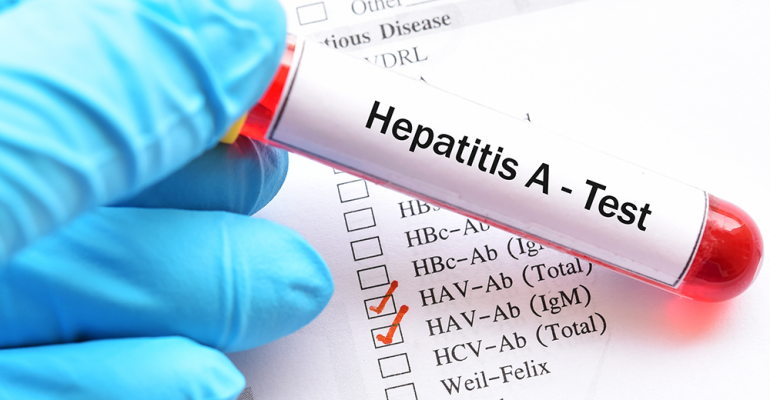 What to do if an employee gets hepatitis A: The basic facts

With hepatitis A in the headlines lately, it’s time for a primer on what you need to know as an employer. We asked a public health expert in the healthcare field to give us the basics.

According to the CDC (Centers for Disease Control), hepatitis A is vaccine-preventable, communicable disease of the liver caused by the hepatitis A virus (HAV.) It’s usually transmitted person-to-person through the fecal-oral route (and can also be transmitted sexually) or by the consumption of contaminated food or water, making it an especially troubling concern for the foodservice world.

“The route to infection is fecal-oral, meaning someone has feces on their hands and then touches ready-to-eat food or equipment,” says Martha Rardin, director of nutrition/dietetics at Hendricks Regional Health, a hospital system in greater Indianapolis. “Eating only a small amount of the virus can make someone very sick. Hepatitis A has been linked to shellfish from contaminated water, too. In 2016, there was a hepatitis A outbreak with frozen strawberries and raw scallops. Cooking does not destroy it.”

When someone contracts hepatitis A, it won’t become a chronic disease, like other forms of the virus, but it will usually result in symptoms such as fatigue, low appetite, stomach pain, nausea and jaundice that can last for as long as two months.

If this happens to an employee, “the infected person may not present with symptons for weeks, but can be infectious during this time,” Rardin says. “Employers need to inform new employees upon hire about hepatitis A and how to report off for work. The infected staff member needs to be exclude from work at least two weeks after the onset of symptoms. If jaundiced, food workers should not return to work for at least one week after the onset of jaundice.”

The CDC says the best way to prevent hepatitis A is through a vaccine, but that’s not always feasible for foodservice operations due to high turnover of staff in many places of business. But for healthcare foodservice especially, Rardin thinks the vaccine should be mandatory.

“As with any foodborne illness, those among us that are elderly, young and pregnant are at greater risk for contracting hepatitis A,” Rardin says. “I think it’s important for foodservice workers in a healthcare setting to receive hepatitis A vaccinations as a condition of employment.”

While there is obviously a cost associated with this, Rardin says “the cost of a hepatitis A outbreak at your facility far surpasses the vaccination cost.”

What if vaccines for your employees isn’t an option? It’s best to keep everyone educated on what to look for and what to do. That’s tough as well, because “in many instances, foodservice workers need their weekly income and will come to work when they are sick and need to stay home,” Rardin says.

So, educating staff on call-off procedures, the symptoms of hepatitis A and other foodborne illnesses, “as well as the importance in our jobs to keep patients and customers safe,” are the main lines of defense, Rardin says.

Other lines of defense include the common-sense food safety practices that should be in place anyway: An emphasis on handwashing and using disposable gloves. And it’s not enough to put those policies into place and sit back, Rardin adds.
“As foodservice directors, we should be educating but also monitoring and coaching our associates about the importance of handwashing,” she says. “The best defense is hand washing, avoiding bare-hand contact with ready-to-eat food and to purchase shellfish from approved, reputable suppliers.”

And finally, if an outbreak of hepatitis A occurs within your facility, your local health department should be involved ASAP.

To get more info on hepatitis A, visit the CDC’s website.