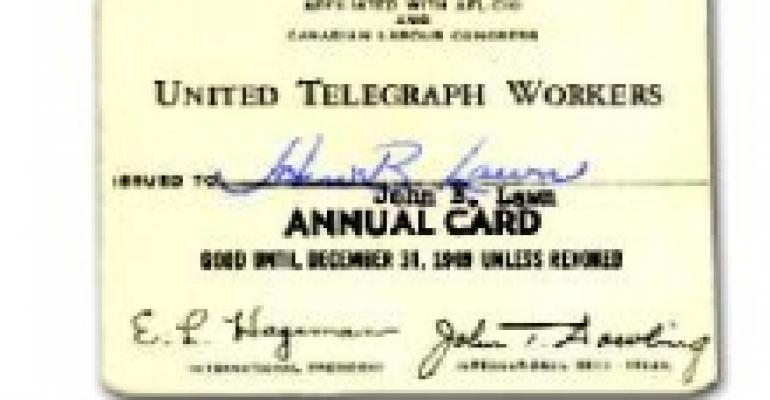 Can You Read Me STOP

In the summer of 1969, after sophomore year in college, I had a job that no longer exists. At the urging of a friend who held a similar position in nearby Westport, I applied and was accepted to become a teletype operator-trainee at the Western Union office in Norwalk, CT.

What gave me a leg up was the fact that I aced the office's spelling test and knew how to (mostly) touch type, the result of a summer school class my mother had forced me to take a few years earlier. (Back then, few young men could type. My mother was clearly prescient about such things.)

The office manager took a chance, signed me up for the union, local 146, and put me to work. I spent the next 14 weeks taking and delivering telegrams over the phone and handling tasks no one else in the office wanted to do (e.g., "singing"

I also began learning the rudiments of sending messages on the big teletype machine in the corner from our senior operator, an older woman I'll call Jane. I don't remember much about the technique, but I do remember clearly the best piece of advice she gave me: "In the beginning, don't worry about speed at all," she said. "Just work on developing your rhythm."

In late afternoons, when things were slow, I got to operate one of several newer "Telex" machines mounted on the back wall. These were dedicated lines used by large local businesses who paid for the privilege of sending and receiving their messages in close to real time.

We used one of the Telex lines to communicate with the office in Westport, where my friend worked, and he and I would send jokes and other inconsequential messages back and forth via the keyboards. Our exchanges would print out on the rattling roll of telex paper as we typed—it was a unique experience. I now see we were pioneers of "instant messaging," although we didn't know it at the time!

Telegraph messages had their own protocols. For the most part, punctuation marks and symbols like @ and % were avoided because they could easily cause mistakes in transmission. Numbers were most commonly spelled out. Our machines typed in capital letters only, and the ubiquitous STOP served as a key sentence and idea terminator.

Such protocols were more influential than many people know. -30-, a symbol long used by the media to signify the end of a news release or story, originated as one of the shorthand expressions that helped reduce bandwidth use on telegraph lines. Similarly, Morse Code begat several subsequent "serial codes," and these in turn eventually begat the uppercase ASCII character set which remains a foundation of modern computer telecommunications.

Meanwhile, 1969 was an interesting year.The Woodstock Festival took place that summer (I thought about going, but needed money for school and worked in the office instead). It was the summer Americans first walked on the moon and also the year Senator Edward Kennedy made his ill-fated drive down Dike Rd. in Chappaquiddick, Martha's Vineyard. Because Kennedy afterwards asked his constituency for their "advice and opinion" on his decision about whether to remain in office, I found myself in subsequent days taking many telegrams from polarized New Englanders sending him their views.

What brought all these recollections to mind was Western Union's decision in late January to terminate telegram service permanently and focus instead on its money order business. It was a long overdue recognition in this era of e-mail that, as a communication mechanism, the telegram had finally outlived its usefulness after 150 years.

Today, it is the bloggers and Webmeisters who have learned to type "with rhythm," and who are pushing the envelope with new communication protocols and techniques. That said, it is a good time to note that we at FOOD MANAGEMENT have embarked on an effort to significantly upgrade our own Web and e-presence this year.

I'll keep you posted about our initiatives on this page, and call your attention this month to our newly-launched blog. There, you can now find otherwise unpublished photographs of the recent FAME Awards ceremony, as well as streaming audio clips of the winners' acceptance speeches. Access it at www.food-management.com/blog