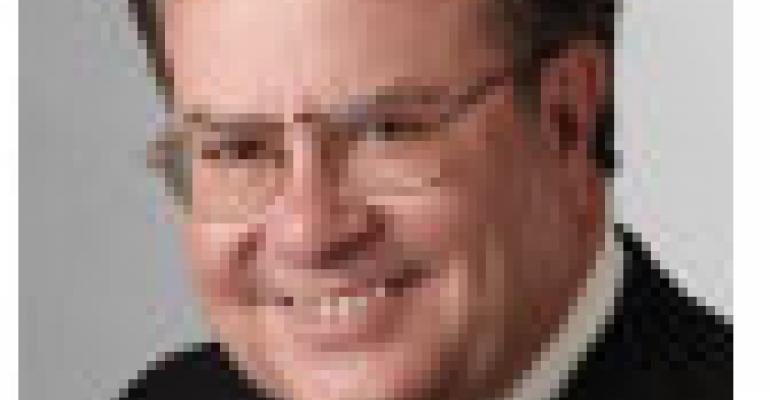 A Devilish Look at Food Humor

A bit of food humor goes a long way to lighten the stress of the holidays.

When it comes to food, those of us for whom it represents a career are at something of a disadvantage. As friends and family find their thoughts turning more often to food and food memories during the holidays, food for us is often as much a reminder of work life as it is of leisure, celebrations or tradition.

That's one reason it behooves all of us to to make fun of food, food culture and food traditions — in good humor, of course — from time to time.

At this time of year, with year-end holidays and their stress levels fast approaching, it seems a good time to poke a bit of extra humor into our readers' lives from our editorial page. And as my source for that this month, I refer readers to a very entertaining book written by Barry Foy and published by Seattle's Frogchart Press.

Titled, The Devil's Food Dictionary: A Pioneering Culinary Reference Work Consisting Entirely of Lies, this modest volume will keep you and your staff entertained on a regular basis for years to come. Here are just a few examples of the many gems you'll find in it:

A pale, subtly flavored substance indispensable to the making of Mousses, Souffles, Meringue, Popovers, and the buttery Spread provided in American pancake restaurants. The mass produced air available in supermarkets is very affordable, and the home cook is encouraged to make use of it if nothing else is available. However, it will seem lackluster in comparison with the many artisanal culinary airs now on the market, including Grass-fed, Kosher, and Celtic air, and the extremely pricey fleur d'air.

A traditional method of preparing saints, traitors, and other enemies of the state. Among its many advantages, boiling in oil rapidly seals in juices, effectively preserving relics. also see Puffy Fried Dough.

A fatty substance, actually a steroid, important to human health. Home cooks will be pleased to know that adding cholesterol is a handy shortcut for improving flavor and mouthfeel in dishes ranging from barbecued ribs to layer cake. A heaping tablespoon per serving should suffice for most recipes and can either be incorporated into the dish or served on the side. Try wrapping a spoonful or two of cholesterol in a lettuce leaf, or substituting it in any recipe that calls for celery seed.

The opposite of restaurant cuisine, in that it does not improve no matter how many bad reviews it gets.

Generally considered the national dish of French Canada. We could describe it here, but you'd think we were kidding.

A small quantity of food eaten at any hour of the day or night, not for enjoyment or the fulfillment of some kind of craving, but strictly in the interest of good health. A stomach not kept in continual readiness by frequent snacking may be incapable of efficiently digesting the upcoming meal. Scientists recommend crisp, salty fried things in a bag as the best means to accomplish this.

Once considered, simply, the four flavors, these underwent a change in status following the Western world's discovery of umami, the so-called fifth flavor. They are now correctly referred to as “the first four flavors,” “the four Caucasian flavors,” or “umami's little helpers.”

A scheme common to gourmet restaurants, by which a number of dishes chosen by the chef are served sequentially in small portions. Tasting menus are now so popular that their origin as a make-work program for unemployed dishwashers is nearly forgotten.

My advice? Buy yourself a copy and consider getting additional copies for culinary folk who might be on your last minute holiday gift list. I guarantee it will help take the stress out of their event and food-filled holiday obligations.