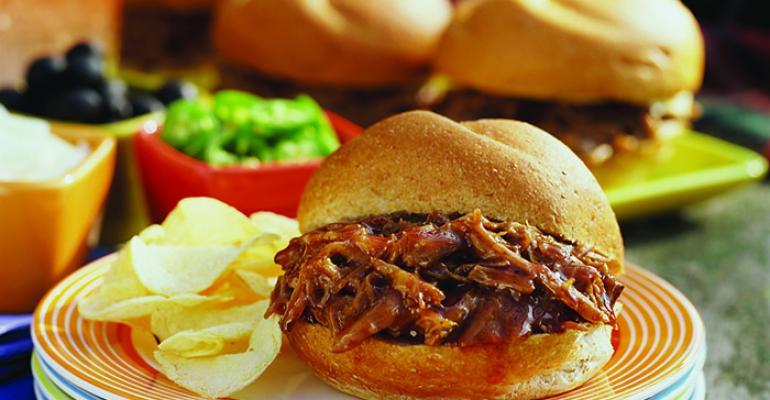 What you need to know now about hot sauce, barbecue, novelty snacks,&nbsp; bubbly beverages and more, according to the latest from Technomic.

Technomic has identified six mid-year menu trends based on restaurant visits, interviews, surveys and more, and although the focus is clearly on our friends in the more commercial world, that’s not to say these trends aren’t already popping up in more noncommercial segments. Here’s Technomic’s take in italics, and then some tips and examples of what we’re seeing across the onsite world.

Here’s the scoop on how Sriracha became the hottest sauce in the world, or so it seems. Now the race is on to find the next Sriracha, and here’s some advice on how to work with the world’s hottest chile, if you dare.

2. Barbecue Love: Authentic regional interpretations of slow-cooked barbecue continue to have broad appeal, but the latest trend is the application of barbecue sauces and flavors to handheld offerings like sandwiches and pizza, often with barbecue pulled pork as the core protein.

We tackled the growth of barbecue, and in particular low, slow and smoked, in a recent story with several examples from universities like North Carolina State, Georgia and Oklahoma, and even the DCH Regional Medical Center in Tuscaloosa, AL—all of whom were successfully experimenting with smoked meats.

A recent event at Georgia Tech featured grilled chicken with dried peach tamarind barbecue sauce, an example of the versatility of BBQ sauces.

Mixing a classic snack with a classic brand is a surefire winner, just look at the Brisket Dorito Bag at Miller Park in Milwaukee, one of the Most Interesting Ballpark Eats of 2014. The combination of smoked brisket (see No. 2) served in an open and almost full bag of Doritos is hard not to enjoy while watching America’s pastime. This idea is surely being replicated in some way across college campuses, and it definitely would be enticing at the K-12 level, if some savvy chef could make the numbers work to keep the snack healthy enough.

UCLA’s Feast at Rieber is an all-Asian menu with such right-size items as Pork Congee Rice Porridge, bao buns and pot stickers.

We saw, and tasted, this firsthand in Columbus at Ohio State’s Juice2 fast-casual outlet at its impressive rec center. Check out the smoothie menu there, which offers some of those unique ingredients, like peanut butter, or leaf spinach in the Tropical Green smoothie (with pineapple, banana, spinach and soy milk). Not to mention foodservice director Zia Ahmed and some students recent;y returned from a summer trip to Honduras, where they got an up close look at one of their coffee suppliers. Pinellas County (FL) Schools was just announced as a Best Concept winner for its innovative menu of fruit and vegetable combined smoothies that taste great, but also satisfy USDA standards for a qualified school meal (and reimbursement).

Not quite as healthy, but we’ve recently seen the craft beer trend sprouting up on college campuses, with Cal Poly Pomona even opening its own microbrew pub called Innovation Brew Works utilizing hospitality and agriculture students.

6. Shrinking menus: Across all mealparts, casual-dining chains are reducing menus. Operations can slow down when menus get too big; a less-is-more approach can create a more user-friendly customer experience. Will the success of narrowly focused fast casuals lead to more menu and operational simplification in full service?

Less is more is a common theme among the cafeterias serving kids in schools, and one-bowl meals are a prime example of that simplicity. Check out these examples of simple meals that can provide quite a complex taste.