School foodservice operators are concerned about a wide variety of issues that range from the new USDA rules regarding the sale of competitive foods to the way student allergies must be accommodated in the lunch room. Here are background articles on these and other issues to help you be more informed about them.

What Implications Do New Competitive Foods Rules Have for K-12 Foodservice Revenues? 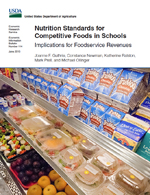 USDA tried to estimate the effects the new competitive food rules from the Healthy Hunger Free Kids Act of 2010 would have on breakfast and lunch school meal revenues. It released its findings in  this June 2013 report  by its Economic Research Service.

The analysis looked at the widely differing contributions suchsales make to school programs depending on the nature of the school and districts involved, ranging from those in affluent suburban districts to those in large, urban and pverty-stricken districts. It also evaluated competitive food consumption differences between K-8 and secondary school populations.
There is a wide range of market, consumption and demographic data in this report that paints the picture of an issue that is far from simple. You can download a pdf of it, here: Nutrition Standards for Competitive Foods in Schools: Implicatons for Foodservice Revenues.

Moving Beyond the Cafeteria

School directors are engrossed in the details on competitive food rule implementation, but this New York Times article shows the way the issue is being presented to the public: U.S. Standards for School Snacks Move Beyond Cafeteria to Fight Obesity.

Next month, the School Nutrition Association and child nutrition directors and suppliers from across the country will descend on the capitol to educate Congress about the impact legislation is having on their school meal programs. For a quick review of the top items on SNA's agenda, download a copy of its 2014 Position Paper on Federal Child Nutrition Programs and a copy of its Talking Points for Child Nutrition.

If You Lead the Kids to Water, Will They Drink It? 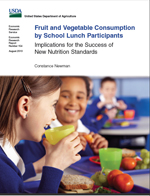 SCHOOL LUNCH: Modifications Needed to Some of the New Nutrition Standards

In 2012-13, many schools had great difficulty meeting the part of the new USDA meal patterns that required meat and grain maximums. This June, 2013 report by the General Accountability Office, SCHOOL LUNCH: Modifications Needed to Some of the New Nutrition Standards, recommended that USDA permanently remove the requirements and give districts more flexibility in grades 6-8 and 9-12 lunches.

A December 2013 report from the Pew Charitable Trusts and the Robert Wood Johnson Foundation found that the vast majority of school foodservvice authorities (operators) need additional kitchen equipment if they are to successfully implement the updated meal pattern standards. Download a copy of the full, Kids Safe and Healthful Food Project report here: http://www.pewtrusts.org/uploadedFiles/wwwpewtrustsorg/Reports/Kids_Safe_and_Healthful_Foods/KITS_Equipment_Report.pdf

The Center for Disease Control was charged with developing 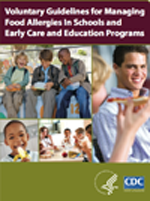