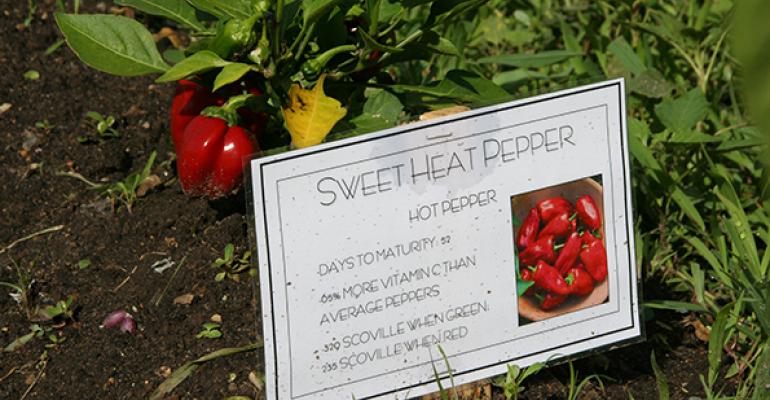 Efforts at the Michigan hospital include local sourcing, a seasonal farmers market and an onsite garden tended to by a master gardener.

When Ryan Reynolds read the job description for the open chef position at Metro Health, a 208-bed hospital in Wyoming, MI., he felt compelled to apply.

“My career was going really well and I wasn’t even looking for a new job,” says Reynolds, who was a corporate chef overseeing six accounts at the time. “I had developed really great relationships with farmers in the area. I was used to using tons of local and seasonal products in my menus. And I was actually in the process of building a garden when I stumbled on the ad.”

He showed it to his wife, who agreed that it jived with everything Reynolds held near and dear, and encouraged him to apply.

“After a barrage of interviews and culinary tests, I was offered the position,” he says. “I happily accepted.”

Two and a half years later, Reynolds is still smitten with his position and has found a number of ways to put his stamp on Metro’s already very green operation. According to the Grand Rapids Business Journal, Metro Health landed on the 101 Best & Brightest Sustainable Companies in Michigan list for the third year in a row in 2014. It also recently celebrated the 10th year of its sustainability journey.

Chief among Reynolds’ accomplishments: a streamlined farm-to-hospital program that sources dozens of products from within 250 miles of the hospital.

“Because we are a primarily scratch kitchen, we’re able to showcase Michigan products in a number of really great dishes and outlets, like our giant salad bar,” Reynolds says. “We’re also able to incorporate these products into patient menus.”

The hospital also features local produce and products—like locally baked breads and pastries as well as turkeys and other proteins—in other parts of the cafeteria, especially on its innovation station where chefs do à la minute cooking of everything from fresh tossed salads to stir-fries and carved items.

“The hospital allows me to have a known volume,” Reynolds says. “So when I’m working with farmers planning crops, I’m able to tell them exactly how much I’ll need of what and when.”

There are still plenty of variables out of his control, but Reynolds has found that by focusing on special ingredients, grown by specific farmers, he’s better able to manage anything Mother Nature might throw their way.

“We’re always looking to forge new relationships, too,” he adds. “We’re actually in the process of building a new relationship with a farmer who grows vegantic vegetables, which are crops grown without the use of chemicals, compounds or animal inputs of any kind.”

Even with these well-established relationships, Reynolds still has trouble pulling back entirely from big business for certain products like eggs.

“We’re located near some really big egg producers,” he says. “But because of certain restrictions at the hospital, we can only use whole pasteurized and liquid pasteurized eggs. The liquid ones are not an easy product for a smaller farmer to create.”

Even so, he’s trying. “Our goal is to grow our local sourcing relationships by 20 percent every year for the next five years,” Reynolds says. 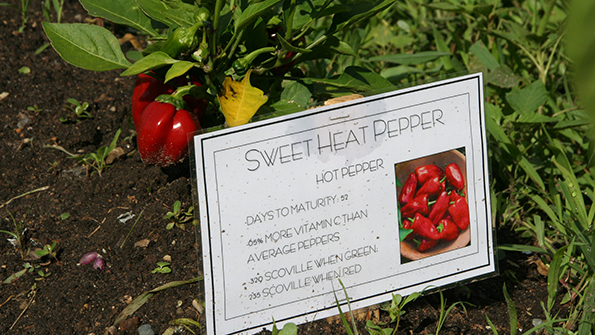 Taking local a step closer, Metro also has a large onsite community garden where it grows heirloom tomatoes, peppers, broccoli, Brussels sprouts, different colored cauliflower and carrots, long beans, string beans, eggplant and more. One of Metro’s chefs doubles as a master gardener and works with a team of volunteers as well as students from the local YMCA to manage the planting, growth and harvest.

“We can’t grow a full menu cycle’s worth of ingredients in our garden,” Reynolds says. “So instead, we make a big splash about the one-day specials and dishes we do that feature the garden’s ingredients.”

For example, Metro’s homegrown eggplant was used in an eggplant Parmesan, which was the bell of the ball on a recent meatless Monday. “Our customers were surprised to learn about all the different types, tastes and textures of eggplant,” Reynolds says.

In the summer, Metro also hosts a weekly farmers market. “The market has been around for nine years,” Reynolds says. “But it’s grown in size and scope each year. Plus, it’s an excellent opportunity for me to get out of the kitchen and talk with the growers and producers.”

“Customers love to see chef in his whites out walking the market, too,” says Ellen Bristol, director of communications & public relations at Metro. “It underscores the fact that we live what we preach.”