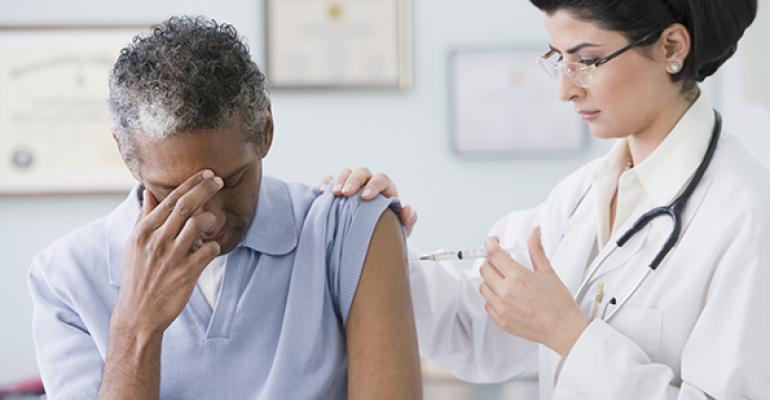 More than half of food workers come to work when sick, survey finds

More than half of food workers come to work sick, despite the health risk they pose to fellow workers and the food system, according to a recent survey by the Center for Research and Public Policy.

This data is according in a report called “The Mind of the Food Worker,” based on a survey in July of about 1,200 people who work in the food industry. The survey was commissioned by Alchemy Systems, a consulting and technology group that works on food and workplace safety issues.

The goal of the survey was to better understand the motivations, attitudes and perceptions of the roughly 20 million people who work across the spectrum of foodservice—from growers and processors, to kitchen workers and servers—in the U.S. and Canada.

The survey also queried about 79 food industry leaders to identify gaps between workers and corporate management.

One clear gap had to do with the practice of working when sick, according to the report.

Only 5.6 percent said they never work when sick.

Corporate leaders, however, estimated that only about 18 percent of workers come in when sick, indicating they may not be aware how common the practice is.

“One of the fundamental things we believe this shows is that there is a disconnect between what management believes is happening versus what is actually happening,” said Laura Dunn Nelson, Alchemy Systems vice president of business development.

Another key insight: Fear of losing pay was not the No. 1 motivator for working when sick.

When asked why they work when sick, nearly 47 percent of respondents said they “don’t want to let co-workers down.”

Another 45 percent said they “can’t afford to lose pay,” and 34 percent of respondents said they work when sick because they don’t believe they would be contagious.

Working while sick in the food industry poses a workplace safety risk, the report said. Frontline workers, like those in restaurants, can contribute to costly food recalls or deadly outbreaks, for example. The report cited a study by the Centers for Disease Control and Prevention that found infected food handlers were the source in 53 percent of foodborne norovirus outbreaks.

Sick workers also may pose a workplace injury risk if they are operating heavy machinery and taking medicine that can impair motor skills, the Alchemy report said.

The report, however, stopped short of recommending that employers in the food industry adopt paid sick leave policies.

A growing number of states are moving toward mandated sick leave. According to the advocacy group Family Values @ Work, paid sick leave legislation has been adopted in Oregon, California, Massachusetts and Connecticut, as well as more than 20 cities, including San Francisco, Washington, D.C., Seattle and Philadelphia.

The issue has been pushed by the White House, which in September estimated that about 40 percent of private-sector workers don’t have access to paid sick leave. President Obama issued an executive order mandating paid sick leave for workers employed by federal contractors, including those in foodservice.

Nelson said the goal is to give employers within the food industry information they can use to address their own organizational needs.

Policies offering more flexible scheduling, for example, could be a solution, Nelson said. Employers might look at allowing another team member to fill in for sick workers, or for workers to be moved temporarily to a position that doesn’t involve contact with food, she said.

The report also urges employers to look at their communication about sick leave policies and to create a culture where it’s OK to stay home when sick, not only to protect follow workers but ultimately to protect consumers.

“There needs to be clear communication about what those expectations are,” said Nelson. “Typically the only time an employee gets information about company policies is when they are onboarding, but there could be more ongoing conversations around that issue. We need to be talking about it.”