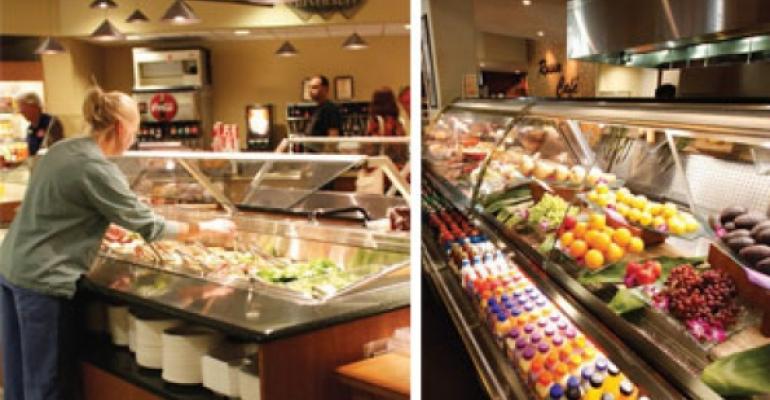 Operators in most onsite segments can look forward to growth in the 2.5-5 percent range next year, but several looming trends will challenge them.

A year ago, forecasters surveying the U.S. economic landscape were looking desperately for “green shoots” to indicate that growth might be returning and that government stimulus efforts were having an impact. This year, while plenty of green shoots have sprouted, flowering still seems a long way off and concern is increasing about the dangers of over-fertilization.

In contrast, onsite foodservice has remained somewhat insulated from the recession. Many of its segments grew 2-3 percent last year and will grow 3-5 percent again this year (see chart). Meanwhile, unemployment remains stubbornly high, and may not return to “normal” levels until late in the decade. And budget cutting at the state and local level promises to put pressure on almost all noncommercial institutions.

In short, while prospects for foodservice business growth are looking quite a bit better than a year ago, the pressure for cost cutting and revenue enhancements continues unabated.

The economy as a whole is forecast to grow 2.5-3.5 percent in 2011 and into 2012, boosted by stimulus spending and continuing low interest rates. That's a rate economists think will only reduce unemployment very slowly (most believe it will remain over 9 percent most of this year and over 8 percent next year).

Core inflation forecasts (excluding volatile food and energy prices) range between 1.5-2 percent through 2012, although inflation hawks worry that stimulus money has already set the wheels in motion for more significant increases after that time. In the interim, rising food costs and especially, higher energy costs, are taking the effective inflation rate higher for most households. Some are predicting gasoline prices may exceed $4 a gallon by 2012.

Poor growing conditions worldwide pushed world food prices up over 30 percent in the second half of 2010 and significantly reduced worldwide grain stocks.

Commodity prices are rising more quickly than expected and manufacturers are warning that these costs will have to be passed on.

Unexpectedly low corn and soybean yields in 2010 due to weather volatility and increased global demand for grain have pushed prices back up to 2008 levels, with traders worrying that low stockpiles could lead to further price increases later in the year.

Higher wheat costs are expected to increase cereal and bakery prices 2-3 percent in coming months. Ethanol production continues to compete for corn supplies, offsetting record production in states like Minnesota. The prices for palm oil, wood pulp and resin (for paper and plastic packaging) are under pressure; and the world price of cocoa has doubled since 2008 to the highest it's been in 30 years.

Beef prices were up 6 percent in 2010 and both beef and pork prices are expected to increase 3-4 percent in 2011. Eggs, milk and cheese are up 4.5-6 percent compared to a year ago, with more increases in dairy prices expected. Fruit and vegetable prices have remained largely flat, a bright note, especially for school nutrition operators.

City and state budgets are in serious trouble, with major implications for education, healthcare and government institutions. Unfunded pension benefits for government workers have grown to a level that increase the cost of raising money in bond markets. Most have coped with declining tax revenues largely with the additional Federal stimulus funding they've received, but that income is almost gone. Billions must be cut or raised to make 2011-2012 budgets balance.

On the labor front, minimum wage increases have put upward pressure on labor costs, although high unemployment has tempered the impact so far.

Healthcare costs continue to rise and little certainty exists about the impact 2010's national healthcare legislation will have on either costs or benefit programs. The largest contributors to the federal deficit are Medicare and Medicaid, where nominal costs are expected to double over the next decade.

Also, right now, fewer than half of hourly employees take healthcare benefits, warns foodservice contract consultant Tom MacDermott, “but at some point under the new law, everyone will need to have insurance or the employer will have to pay penalties.”

Below are a few segment-specific trends, many of which are elaborated upon in expert interviews on the following pages.

Higher education is struggling with funding cutbacks. $2.5 billion of current state spending on higher education came from stimulus fund coffers that are almost empty. Endowment funds have recovered from some of their losses but remain below 2008 levels. Uncertainty about future appreciation has caused many schools, especially smaller ones, to reduce endowment spending levels as a cautionary strategy.

Campus dining remains one of the few programs that has the capacity to generate additional revenue for a school and will be looked to for even more operating fund support than in the past.

Sustainability remains a powerful trend on campuses nationwide and schools continue to emphasize green initiatives, including many in the foodservice arena, in their student recruitment efforts.

Tighter P&L management, an emphasis on driving retail cash sales and efforts to revive catering as an income source will characterize many strategies in the year ahead.

Healthcare generally is apprehensive about the impending effects of national healthcare reform. Depending on final implementation, longstanding bad debt costs could be reduced, but cutbacks in Medicare and Medicaid reimbursements are seen as inevitable. Much will depend on whether and how regulated private health insurance and insurance “pool” initiatives move forward.

Where retail food revenue can help hold down the net cost per patient day, administrations are becoming more willing to support program expansion.

Major growth opportunities exist for many hospitals able to upgrade their retail space and offerings. In many ways they are the “new B&I” market.

Food's role in improving patient satisfaction remains a competitive advantage, but will get support only when other financials are in balance. More hospitals are trying to keep catering in-house, but want rock-bottom costs for providing services, often a zero-sum game.

New USDA nutrition rules and other requirements will almost certainly increase food costs, but some additional reimbursement money and tighter regulation of the sale of competitive foods on school campuses could help improve the financial picture in modest ways. Many districts and suppliers will find the new requirements hard to meet — stay tuned.

Scratch cooking is a trend in districts where school facilities and skilled labor make it a cost effective reality. Where it's not, the pressure is on for manufacturers to offer higher quality, more nutritious and cost effective convenience options to overtaxed directors.

Breakfast programs continue to expand, as do after school programs and summer feeding.

In business and industry, stagnant take-home pay and employee populations that remain well below what they were have made sales increases hard to achieve. The good news is that a multi-year revenue declines appear to be over.

Office sizes continue to shrink as companies employ “restacking” strategies when moving offices or re-structuring floor space, but in some ways this can be a positive for dining departments. To compensate, many companies are encouraging more “collaborative” space and corporate cafes and break areas foten can fill this bill.

High-end QSRs like Chipotle and food retailers offering more sophisticated takeout (including in some cases those trendy food trucks) try to tap B&I employees as customers any way they can. Savvy B&I directors and managers are looking to manage menus in every way possible to undercut their appeal.