The Problem with Desktop Dining

Research shows that even as more employees are eating at their desks and work stations, most do not realize that these surfaces are far more contaminated with &nbsp; bacteria than are cafeteria tables or even toilet seats. Further, large numbers of employees do not wash their hands before eating in this way and many also do not keep food refrigerated to the degree it should be.

Increasing numbers of U.S. workers are eating meals at their desks, a trend that health experts say is accompanied by health risks that are significantly greater than most employees realize.

In fact, nearly twice as many workers eat at their work 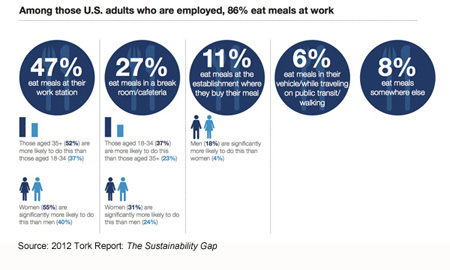 stations as eat in an onsite break room or cafeteria, according to a recent study by Harris Interactive performed for Tork/SCA.

The Harris/Tork research focused on sustainability issues among the general population and among business professionals, and in doing so also looked at some of the demographic differences in the way meals at work are consumed. For example, workers over 35 are more likely to eat at their desks than are younger workers, and women are significantly more likely to eat their meals in a break room or cafeteria than men are.

The 2012 Tork Report, The Sustainability Gap, was based on an initial survey of over 2,000 adults, augmented by a second survey of over 1,500 North American business professionals.You can download a full copy of it here.

Those findings were echoed in a Deskstop Dining Survey by HealthFocus International that was commissioned by the Academy of Nutrition and Dietetics and ConAgra Foods. That report found that a whopping 83 percent of respondents reported they eat both meals and snacks at their desks. The percentage was highest for lunch (62 percent, with snack, breakfast and dinner consumption coming in at 50 percent, 27 percent and four percent, respectively. (You can download a summary of its findings here.)

The health risks of work station meal consumption often go unrecognized, the Academy says, citing other research that found the typical desktop has 100 times more bacteria than the average kitchen and 400 times more than the average toilet seat. It notes the risks can be even greater because only 50 percent of respondents reported they always washed their hands before eating lunch at work. 64 percent reported they clean their work area only once a month or less frequently.

Even as over 50 percent bring their lunch from home, 49 percent of the Academy’s respondents acknowledged that they were guilty of leaving lunches that required refrigeration out of the refrigerator for three hours or more.