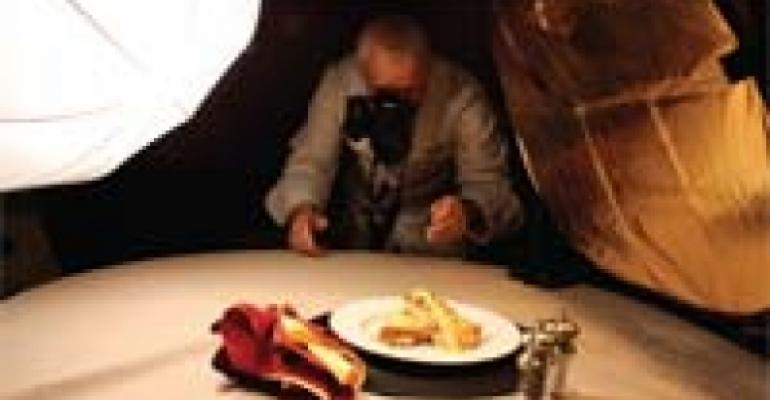 Shooting your own high quality food photos can help you improve your promotions, menu board presentations and catering sales efforts. And it's not as hard as you might think. (Part 1 in a series)

Every dining department has one — an album of snapshots taken of plate presentations, catering displays, special event offerings and other past culinary creations. Often, these photos were taken because the subject matter represented some of best the department has offered. But in most cases, the quality of the photography is poor-to-middling at best.

Capturing attractive images of food is one of the more difficult specialties in the photography world. The truth is that the techniques most amateurs use to take ordinary snapshots are counter-productive when it comes to capturing an image of food that has real impact and appeal.

While most FSDs and managers will never become food photography pros, many can learn — or have someone on their staff learn — to take pictures that are immensely better than what they have in those scrapbooks now. The investment is mostly in know-how, not in equipment, and in understanding basic techniques of lighting and composition.

To help you get started, Food Management interviewed several readers who have developed their own techniques for this purpose. None are professional food photographers per se, and each one works differently. Some use only the simplest of equipment, while others, like Sodexo's David Martin, shown above, use more involved lighting setups. All have produced high quality results.

This is the first installment of a series of short articles in which we'll talk to each of them to explore some of the differences in their techniques and shooting philosophies.

First, let's consider some general advice that will apply from the simplest to the most complex efforts.

Light, not a camera, is your primary tool. You don't need top-end equipment to shoot a quality picture. While a digital single-lens reflex (DSLR) is preferred, even some of the better point-and-shoot cameras can do a credible job if you take them off automatic and turn off their on-camera flashes. Lighting and composition are the most important factors.

Don't mix light sources. This is a special problem indoors, where different kinds of artificial lighting can cause unpredictable shifts in the color of photographed food. Turn off overhead and other lights and stick to either natural daylight or one kind of artificial light (if possible, balanced for daylight) that you can control.

Shoot many variations of an image once you've got it set up. Vary lighting, exposure, horizontal and vertical compositions, the camera angle. Compose the image close in and farther away, move different elements, add and delete props. This gives more choices later on.

Keep notes about your setup and exposures, especially as you're learning and experimenting. If one setup works very well for you, you'll want to be able to duplicate it again.

Always use a tripod and shutter release to minimize camera movement (if you don't have a remote release, use the camera's self timer). If neither the food nor the camera moves, you can use long time exposures even if the light source isn't very bright.

Our first interview was with Rick Kelly, business manager of residential dining services at the University of California-Santa Barbara. Kelly first became interested in photography when his children were born a decade ago, “and I've developed quite a passion for it since then,” he says. He often shoots food images for his department, like the one used in the sushi promotion shown here.

“I like natural light and use it almost exclusively. There's an office near one of our kitchens that has large windows on three of its walls. I do many of my food shot setups on a table there.

“Avoid stainless steel walls and counters in your pictures like the plague. Stainless just reeks of ‘institutional food.’ Always cover a stainless steel table if that's all you have to work with.

“Large lens apertures (e.g., f 1.8 - f4) give you shallow depth of field (focus) and I like that effect for many of my pictures. In fact, my favorite lens is a standard, fixed focal length 50mm lens that I open up to f 1.8.

“If I do use a zoom lens I zoom in all the way and get back the maximum distance because that also reduces the depth of field, letting part of the image go out of focus.

“I like to get down low, right at the level of the plate. Then, I slowly move the camera up until I get the shot and angle I am looking for. Usually, if you're up high you don't do the food any favors. If you have a tripod with a cranking center post, that makes it easy to move the camera up and down smoothly.

“I always try to avoid too much brown in the food — it's the hardest to make attractive. Also avoid limp food — firm, colorful items tend to show up better. If you can get a little bright red or orange into a shot, it helps the image from appearing too flat.

“Props can really help a picture, but you can overdo them very easily. You need to control how much they dominate the image, you can't let them become the center of attention. It usually helps to keep them somewhat out of focus.

“Chefs have great imaginations and I often ask our chefs to help me gus up a shot, both in styling the food and for their ideas in terms of props.

“It helps to know how an image will be used when you're composing it. If that's not possible, shoot pictures different ways so you have more options later.

“You need a good designer and a graphic design to get the most impact out of your photography — the sushi picture is a good example of this. It had a lot of impact to start with, but the poster design makes it much stronger.

“The sushi was shot in the office I mentioned, with a white plate on a white tablecloth. It was backlit by one of the windows and the front is lit by diffused light from the window behind me. A chef worked with me, rolling the ginger. I added the chopsticks in the last few versions of this shot, with the chef adjusting them in different ways. They really helped to make it pop.

“When you have to take shots on location you often have constraints you can't control — that was the situation with the picture of one of our catered events by a beach venue here. This picture was as much about the venue as the food. We wanted to show the background because it was for a catering brochure.

“The picture far from perfect: we only had a few minutes to shoot it and the food couldn't be moved at the time. The flower, which is distracting, was permanently wired to the table menu holder. People were walking back and forth in the background constantly. Depth of field was again controlled to achieve the effect we wanted.”

“Had we finally used this image, we would have removed the trash barrel and pedestrian from the background in Photoshop.”

Next month, FM will take a look at some of the techniques used by Sodexo's David Martin…