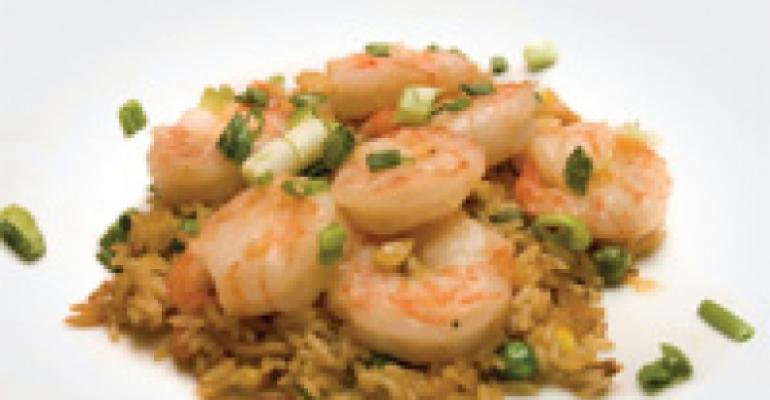 The third in a series of articles about technqieus onsite operators can use to shoot their own, high-quality food images.

Keith Toffling is an Amherst, MA, photographer who got into the business while an undergraduate at UMass. Now finishing up work on a graduate degree in environmental science, he's been a photographer for a half dozen years and counts the annual UMass Foodservice Chef Conference among his clients. “The conference exposed me to an entirely new level of food,” he says. “I attended my first one with the goal of documenting the event, and ended up really getting into food photography. “ We asked Toffling to share some tips in terms of how he handles that kind of assignment.

(Above: Toffling with his portable tabletop setup at the UMass Chef’s Conference last year. White seamless background paper provides a background, with black and white linens used as needed to provide texture or contrast. A wireless shoe-mount trigger sets off the strobe, which is diffused through a white umbrella.)

“When I can't use a setup, I will shoot hand-held photos with a shoe mount bounce flash, bouncing the light off a wall or ceiling. You have to experiment with both power settings and the bounce angle you use, based on the environment. I never use a bounce flash set on automatic — the output is too variable. And I would never use a camera's built-in flash directly — it would flatten the image too much.

“The shrimp and rice shot is an example of this technique. I like using a white plate — I want the food to ‘jump off the plate’ with an almost 3-D effect. A little bit of shadow is good, to help define the edge of the food against the background.”

“Sometimes I will put a diffuser on the shoe mount flash head but usually I prefer to just use bounce light with the power adjusted to give me the amount of illumination I want.

“If I were going for a carefully defined focal point in the image, with a large part of it going out of focus, I would take the natural light route, shooting wide open and using a tripod and a window light.”

“I use a portable studio set up at the chef's conference for some of plated shots. For the background I use white seamless paper, rolled across a counter and taped up on the wall. My main light is a professional strobe head aimed through a white umbrella (see photo).

“The milkshake image was shot this way. The flash and umbrella were about a foot above the subject and angled down, probably at between a 30° and 45° angle. You have to move the light around to get the look and shadows you want. If you use a strobe, you have to take a shot to see what you're getting. The same setup was used for the beef and cabbage and tomato.” (at right)

[Parts 1 and 2 of this series appeared in January and February 2010 issues of FM.]