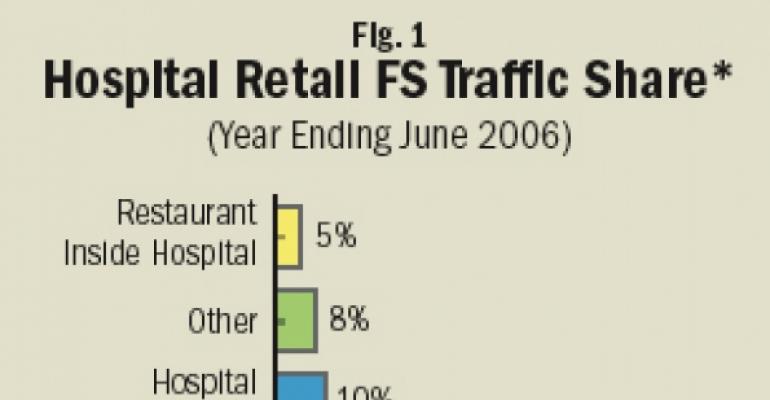 Most operators know quite a bit about their customers' dining habits from in-house POS data, if they analyze it carefully. But what if they looked at the same choices and purchases through their customers' eyes?

New consumer-driven research by the NPD Group underscores where some of the opportunities exist in hospital retail dining that can be capitalized upon by healthcare operators who target employee and visitor populations with a careful eye toward their individual daypart meal occasion habits.

NPD annually collects data on about 450,000 foodservice transactions from a demographically and geographically balanced consumer panel. Of those, about 5,500 report on non-patient dining that has taken place in a hospital. Based on this data, NPD estimates that non-patient hospital foodservice represents 796 million "visits" by non-patient customers each year. When vending machine transactions are included, it says market represents 886 million visits a year.

"Variations in check averages, daypart traffi c, beverage choices and other patterns emerge when you look closely at which parts of the customer base are making retail foodservice choices in hospitals," says Kyle Olund, the senior product manager for NPD Group's CREST OnSite data service.

Not surprisingly, the largest percentage (78 percent) say they dined in the cafeteria or used vending (10 percent), but 13 percent indicate they dined either at an onsite restaurant, or in some other way (Fig.1). In some cases, customers say they used more than one option.

More than half of all transactions occur outside of the lunch daypart. Morning meals comprise a respectable 30 percent of transactions, with supper and "PM Snacks" comprising another 25 percent (Fig. 3).

Bob Lewandoski, Director of Food and Nutrition at HealthSouth-Toms River in New Jersey says such numbers are similar to those he sees. "And if a director

is not hitting numbers like this for breakfast, he or she is probably missing the boat," he offers. "Many hospital employees start their shifts early in the morning and typically do not grab something to eat at home—you should be marketing morning meals and snacks to them."

Mary Keysor, director of food and nutrition at Maine Medical Center, suggests that such numbers also reflect the changing meal habits in hospitals, where non-stop work demands often mean that employees eat at non-traditional times, often on the run.

"People eat all day long now, and want things like breakfast entrees and sandwiches available outside of traditional breakfast and lunch periods," she says. "In our own point of sale systems it has become much harder to identify meals by their traditional labels."

Employees are responsible for 63 percent of snack and meal occasions overall (Fig. 2). Visitors and "others" make up the remainder, a group that could include anyone from a visiting nurse or physician to sales representatives, students, tour groups, volunteers and customers from the local neighborhood.

[Editor's Note: read Fig. 4 data carefully. The bars represent the percentage of a type of customer's meal occasions in a given daypart. (For example, 24 percent of visitor meals are in the morning meal daypart.) The percentages next to the diner-type legend show a diner type's overall percentage of hospital meal occasions.]

Payment types
Cash remains the most popular form of payment in the hospital setting, but employee use of credit/debit cards and hospital meal cards has reached 17 percent. The NPD data indicates that 23 percent of visitors and 42 percent of others indicate that their meal is free or is paid for by someone else. (Fig. 5))

Although that could cover a variety of situations,a significant portion of such transactions could be from meal cards offered to residents, suggests Tony Almeida, director of food, nutrition and environmental host services at Robert Wood Johnson University hospital. "And while the customer may perceive such meals as 'free,' we are still reimbursed for them by the hospital."

Excluding vending, the transaction average reported by employee respondents averages-$3.06, with visitors reporting a higher average of $4.09, Olund says. "This reflects the prevalence of employee discounts."

Lewandoski says one way he has sought to encourage more guest sales is by providing free coffee and fountain beverage coupons to hospital pre-admission departments that can be offered to those coming in for tests.

"Many of these people are fasting for the test and if it encourages them to visit the café, they are not only are likely to purchase something else, but also have learned where the café is, which makes a subsequent visit more likely," he says.

"There is likely a significant opportunity to offer customers increased credit and debit card options," Olund says. "In the commercial environment the percentage of customers paying in this way has increased very substantially over the past five years. In quickservice, only 4 percent of transactions were paid for in this way in 2001, but that has risen to 16 percent today."

Suzette Smookler, administrator for food and nutritional services at Stonybrook University Hospital agrees. "Many of us would like to accept debit cards and could use data like this to support proposals we might make to our administration in terms of the capital and IT investments to do so," she says.

Beverage Choices
Beverage choices, which have a significant impact on retail profitability, also vary significantly when employee and visitor choices are compared. (Fig. 6))

. Significantly, tap water is the second most popular beverage choice among employees, while visitors are more likely to choose coffee, soft drinks and juice.

"We all know that tap water consumption cuts down on beverage sales, but most of us don't have a number for it because we don't ring it up," says Lewandoski. "With consumption that high, it is probably adding significant costs in terms of ice and cups if it is offered on the serving line."

Paul Hubbard, Stonybrook's associate director, says its retail operations take advantage of bottled water's popularity by offering one "free" with daily chefs' special bundled meals. "It adds a lot of perceived value and the bundle is priced to accomodate the added cost," he says.

The NPD Group is a leading global provider of consumer and retail market research information. It is best known in foodservice for its CREST restaurant information reports on the dining habits of commercial restaurant consumers.

For information on the CREST ONSITE data service, go to or contact Kyle Olund at [email protected].