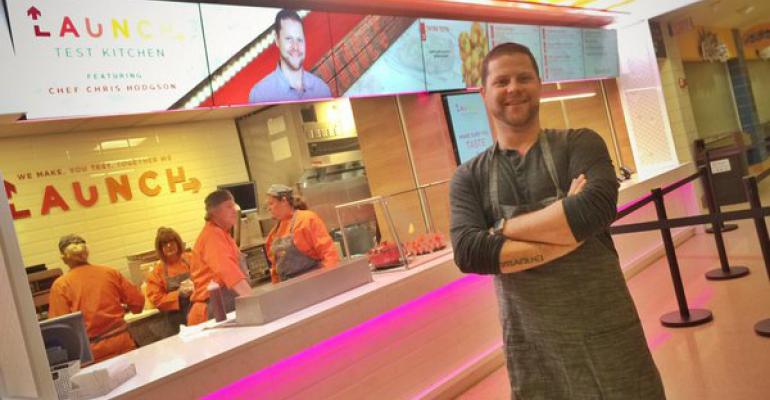 The idea behind the phrase “test kitchen” is obvious: a place to test out menu items before they are taken to a larger arena. Combine that idea with the flexibility and excitement of a pop-up restaurant and you’ll have an idea of what Aramark is up to with the new Launch Test Kitchen.

Guests at Aramark-managed Quicken Loans Arena in Cleveland and at the Las Vegas Convention Center will get to taste new dishes first at the hyper-trendy concept. The test kitchen concept is set up to gather feedback in real time with digital voting systems, helping to decide which menu items might be added to each venue’s permanent menu.

“Launch Test Kitchen is all about flexibility, variety and customization,” says Carl Mittleman, president of Aramark’s Sports and Entertainment division, calling the concept a way to “quickly adapt food trends and introduce new items or showcase local chefs, based on those trends, while making it a very interactive experience for the guest.”

Ordering the trend-forward food is just as cutting-edge: self-serve kiosks put the order into action, and then guests can watch the food being prepared in an open kitchen.

Chris Hodgson is a Cleveland chef who helped pioneer the city’s now proliferating food truck scene with his food truck, Dim and Den Sum, which later became the Hodge Podge truck. He went on to appear on the Food Network’s “Great Food Truck Race” and now oversees as chef and investment partner a group of cool Cleveland restaurants, including downtown Cleveland eateries Hodge’s and the Green Rooster. He had previously worked with Aramark on a slider concept during last year’s NBA finals run and also a hot dog concept at First Energy Stadium, home of the Cleveland Browns. So Hodgson was intrigued by the idea of a pop-up test kitchen at Quicken Loans Arena. Another local chef, Fabio Salerno of TownHall and Lago, had developed a menu for the spot before Hodgson, and more local chefs are expected to follow.

After opening night last month with the Cleveland Cavaliers, Hodgson was feeling exhilarated.

“It was busy,” he says of the opening-night service. “There was a constant line of about 40 to 50 people. After about two minutes, you figure out the flow. We do a couple of test runs, but when you’re launching a new menu, you never know what’s going to be a big seller.”

Surprisingly for a sports venue, the quinoa bowl was a hot seller, coming in just behind the most popular item, the meatloaf melt sandwich with Hodgson’s signature “grandma’s glaze” (which is mainly honey and ketchup).

“This is the customers picking their food offerings…it’s live marketplace research,” Hodgson says. “Instead of opening a stand and throwing a dart at the wall, this is a better way to give fans what they want.”

The positioning of the Test Kitchen—in a busy corridor of the arena—has boosted sales at adjacent concepts—Chef Michael Symon’s B-Spot and a general concessions stand, Hodgson says, because “it’s creating this energy.”

“I think the whole way the area is positioned, with a digital board and bright lights, it just draws attention,” he continues. “People want to see it.”

The concept is also helpful for local chefs who have brick-and-mortar restaurants in town, “because it exposes people to us who have maybe never seen us before,” Hodgson says. “Maybe they’ll say, ‘I gotta stop at Hodge’s before the next Cavs game.’”