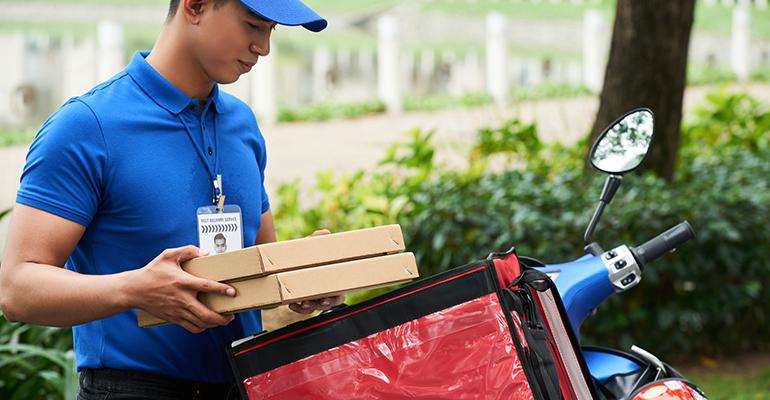 Meals from four dining stations and groceries from a c-store can be dropped at the library and any dorm.

Auburn University in Alabama recently launched a campus meal delivery service that lets students order from four retail food stations as well as a campus c-store and have the order delivered to any campus dorm, plus a couple of other locations such as the campus library.

Meal choices range from Asian and pizza to chicken wings, noodle bowls and even bubble teas, plus select packaged snacks and beverages from the c-store.

The order minimum is $9.99, plus a $4.99 delivery fee, which can all be paid with the school’s Tiger Card declining balance system. However, any tipping has to be done with cash as the system does not allow deposited funds to be used in that way. Photo: Deliveries from select Tiger Dining concepts like Leila’s Pizza to on-campus locations are made by an outside firm, FetchMe, which also delivers on campus from off-campus restaurants. Credit: Tiger Dining/Chartwells

Tiger Dining and management company Chartwells launched the service on a trial basis the week after Thanksgiving last year. That pilot foray was limited to choices from just two outlets, Panda Express and Leila’s Pizza in Auburn’s Terrell Dining Hall, because they were open in the evening when the delivery service was operating.

Delivery was confined to three sites that had convenient drop-off points operated by Tiger Dining: the Ralph Brown Draughn library, which had a small kiosk café operation; the Cambridge Hall dorm complex, which houses a micromarket; and the Lowder Business Building, where a Starbucks unit open until 11 p.m. serves as a popular evening study area.

To handle the drop-offs, Tiger Dining partnered with a local company called FetchMe that had already been making deliveries to campus from nearby commercial restaurants. The arrangement not only removed the problem of finding labor to make deliveries but also supports a local business owned by an Auburn grad student.

The pilot got off to a slow start with only a couple of orders a day, but that was just fine as it allowed the department to evaluate the initiative, work out some kinks and gain confidence that it could operate on a larger scale.

“My worry was that when we launched we would be swamped and wouldn’t be able to deliver the same level of service as when they went to the dining hall,” says Bill Sallustro, Chartwells resident district manager for Tiger Dining. “We wanted to make sure we maintained the same high level of service no matter where students placed their order.”

With the test phase out of the way, the department decided to expand the program once classes resumed in January following the winter break. This time around, deliveries were expanded to all dorm facilities on campus, as well as the Draughn library and the Lowder building.

“FetchMe had already been making deliveries all over campus from outside restaurants, so it seemed like a natural fit,” Sallustro offers.

Drop-offs are made at the front desk of the dorms—there are no deliveries straight to student rooms—using the same procedure FetchMe uses for deliveries from off campus. As drivers get close to the drop-off point, they call the customers to come down and get their order.

At the library and at Lowder, the orders can be left at the kiosk and the Starbucks for pickup, though the student placing the order is still called when the driver approaches the destination.

The prices for the food are the same as if they had been ordered at the station. All orders have to be placed using the GET app, which transmits it to the proper station.

Currently, deliveries have to be arranged manually with FetchMe, which generally dispatches the closest available driver to pick up the order. Deliveries typically get made within about 30 minutes of ordering.

In addition to Panda Express and Leila’s Pizza, the delivery service has expanded to include two other Terrell concepts—Chick in a Box and its menu of chicken tenders, wings and sides, and Boba Tea and Noodles, with its array of authentic Chinese dishes, noodle bowls and bubble teas—plus certain items from the Terrell Market c-store, such as large bags of chips, salsas/dips, pints of ice cream, candies and bottled beverages.

A potential addition to the mix in the near future is yet another Terrell concept, Rye of the Tiger, which menus a selection of sandwiches and flatbreads.

Delivery hours currently run between 5 p.m. and 11 p.m. Sunday through Thursday as the concepts from which the food deliveries come are closed Friday and Saturday evenings.

“If [the delivery program] takes off and there’s a demand, we might be able to see what we can do on the weekends, but currently the demand’s not there” Sallustro observes. In addition, Friday and Saturday nights are busy times for restaurants around the Auburn campus to capture student business, he adds.

“Obviously, we want to do as much business as possible, but we also want to be part of the community and make sure we can help support those restaurants,” he notes.

So far, sales through the delivery option have been minimal, with maybe a dozen orders a night being the high, but Sallustro is hopeful that can grow.

“As we get the word out there we should see more of a pickup,” he suggests. “I also expect to see a boost as we get closer to midterms, when they’ll start staying in their rooms and studying. [That’s when] they’ll probably want to have some late-night options.”