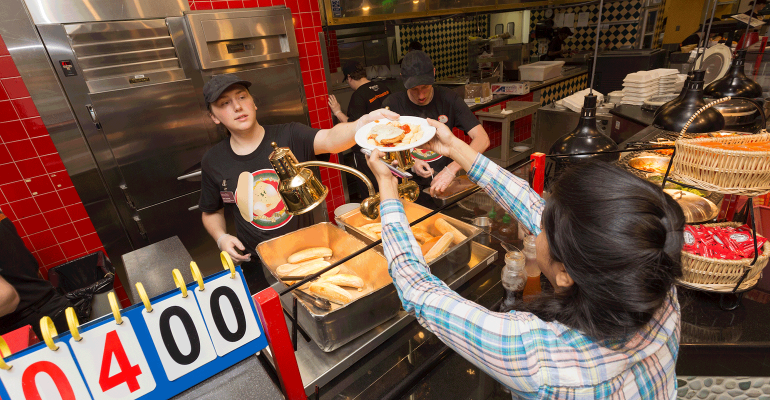 Virginia Tech Dining Services
Dishes of chicken Parmesan were flying out the door April 21, Virginia’ Tech’s official Chicken Parm Day. The counter at lower left is keeping tabs on how many have been sold. It would up at 2,837 for the day.
Operations>Marketing

Chicken Parmesan has its day at Virginia Tech

Officially termed Chicken Parm Day, on April 21, the Blacksburg campus came together to celebrate a favorite dish as well as its sense of community.

It is so popular that at least one campus fraternity, Phi Sigma Kappa, even created an official executive position—chicken parm chair—with solemn responsibility for alerting fraternity brothers when it is Chicken Parm Day at Owens.

Truly, some are born great, some achieve greatness and some have greatness thrust up on them.

The current chicken parm chair, applied economic management major Michael Hanson, decided to take that thrust-upon greatness and run with it. Not only did he issue the chicken parm alerts with increasingly hilarious memes and videos—which soon earned him a campus reputation as the “Chicken Parm Guy”—but he decided he would also like to serve it.

So he contacted VA Tech Dining Services Director Ted Faulkner, who quickly took to the idea.

And so was born Chicken Parm Day on the Blacksburg campus, officially designated as such by a university resolution.

Lines were long all day at the Lotsa Pasta station where the chicken Parmesan was being sold.

It took place on April 21 and ended up doling out 2,837 servings, shattering the previous one-day record of 2,360. It certainly helped that the day fell on Spring Family Weekend, when the campus swarms with visitors, but by holding it then, the event also created an irresistible social magnet for the extended campus community that proved a tremendous success, Faulkner offers.

“It was a great time had by all,” he says. “Our Hokie Bird mascot came, the students’ parents came into town, T-shirts were made and sold and we got permission to use the emoji that was designed last year that designates the dish—it truly has a following!”

And Hanson indeed was one of the servers doling out the food—he had to pass all food safety testing and attend a dining services employee training session before qualifying—along with Faulkner and University President Timothy Sands.

The dish in question, by the way, consists of a deep-fried chicken breast topped with melted provolone cheese, marinara sauce, grated Parmesan cheese and chopped parsley served over noodles with a garlic breadstick.

According to numbers supplied by Faulkner, the day’s chicken Parmesan extravaganza used up over 709 pounds of chicken, nearly 920 pounds of marinara sauce, 177 pounds of provolone and almost 1,064 pounds of pasta.

“Crazy when you think this is just for one dish in normal operations and we were still selling our normal menu and offerings too at Owens Food Court,” Faulkner offers.

Lotsa Pasta is one of a dozen food stations at Owens, which range from Mexican, Asian and American classic concepts to a Freshens branded smoothie/yogurt stand and one specializing in organic, local and sustainably produced foods.