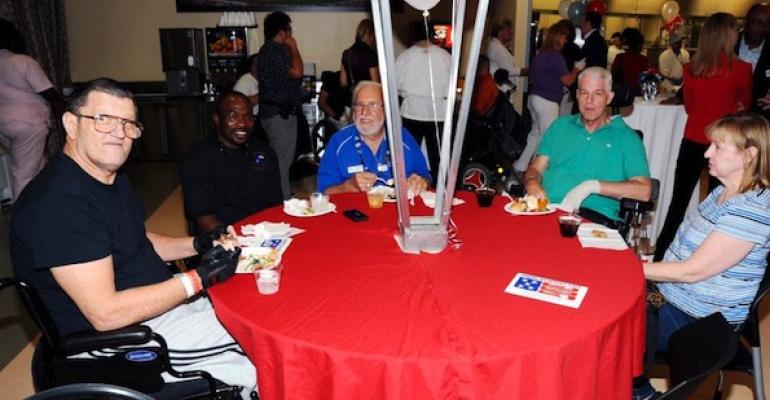 <p>James A. Haley VA Medical Center&#39;s new American Heroes Cafe gives patients the choice of having lunch together or with their families in a casual type restaurant setting.</p>
Operations>Marketing

American Heroes Café offers from-scratch menu patients can eat in the restaurant or have delivered to their rooms.

Like other Veterans Administration hospitals, the James A. Haley VA Medical Center in Tampa offers its patients a traditional meal service of trays delivered three times a day. The selection is minimal and the food is premade and then rethermed.

It’s filling and nourishing but unspectacular.

But now the Haley facility has added another component to its dining operation: American Heroes Café, a fast casual type restaurant located in the complex’s spinal cord injury building, which also includes a new poly-trauma facility.
American Heroes opened May 6th for lunch service with a menu emphasizing sandwiches, wraps, paninis, burgers, soups, salads and smoothies, as well as seasonal daily specials like slow-braised short ribs with honey-mustard glaze and roasted root vegetables and sautéed spring vegetable and goat cheese risotto (with a choice of grilled chicken or salmon).

“Our patients tend to be younger veterans who are used to fast casual restaurants and ordering out, so we tried to create a menu that reflects that,” says Jana Boehmer, chief of nutrition & foodservice for Haley VA Hospital. “The food is cooked on the spot, so it’s fresh.”

Patients have the choice either to come down to the Café to eat communally or with their families, or to order and have the food delivered to their rooms. Boehmer says coming down is encouraged for those who are ambulatory because the socialization helps the healing process.

“The menu design was driven by the patients,” Boehmer notes. “We did focus groups and went around to patient room to get their input on the items they wanted. We then combined that with the chef’s ideas and then did taste tests with all of the patients.”

The chef is Gordon Lippe, who came on board in 2012 and was instrumental in the American Heroes Café design and launch.

Right now, American Heroes supplements the main facility kitchen, which continues to produce and serve patient breakfasts and dinners, as well as lunches for those not wishing to utilize American Heroes.

The space for the new cafe was carved out of a now-obsolete retherm pantry and an adjacent conference room. Its equipment includes a six-burner gas range, a 36” flattop range, a 36” charbroiler, two convection ovens, a top-mounted salamander boiler, two panini presses, a frozen yogurt/ice cream machine and two high-speed combi ovens. Total equipment cost was around $100,000.

American Heroes was serving around a hundred lunches a day in the early going and Boehmer estimates that may eventually escalate to as much as 160. Plans call for eventually expanding meal service to the other dayparts, but there currently is no timetable for doing so.