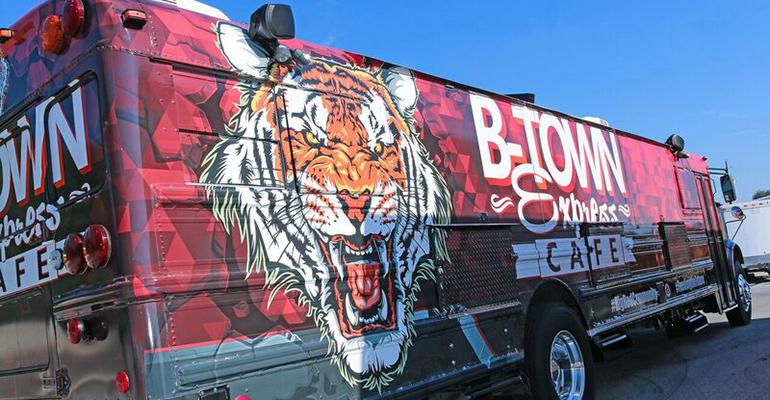 A school bus converted into a fully equipped food truck called the B-Town Express Café is helping Belton ISD in Texas boost lunch participation numbers in its middle and high schools, particularly among paid students, a significant consideration for a district where under half (45 percent) of students qualify for free or reduced price meals.

The district only feed about 60 percent of the paid students in the traditional cafeterias, where most of the customers typically are those qualifying for subsidized meals, says Susan D’Amico, director of nutrition services. “But on the truck, I’m feeding more [paid] kids. When you compare the percentage [of paid customers in the cafeterias] to what we’re getting on the truck, we’re clearly increasing the number of [paid] kids we feed on the days when the truck is at a school.”

D’Amico says the truck typically feeds about 150 students on an average day, making regular weekly stops at the district’s middle and high schools. The schedule as well as the week’s menu is posted on each school’s cafeteria menu boards as well as on the district website.

The menu—developed specifically for the B-Town Express and distinct from what’s being offered in the school cafeteria—is somewhat more upscale than the typical school meal option, and costs more for paid students than the meal price they pay in the cafeteria.

“They use more expensive ingredients such as whole-muscle chicken than we can afford to serve inside the building, so we charge an extra 85 cents for a full-pay student to help a little bit with the expense of the food,” explains D’Amico. Those qualifying for free and reduced meals still receive those meals on the truck.

The menu, which changes weekly, currently offers only a single entrée option in order to facilitate transaction speed. This is supplemented by a selection of pre-packaged sides emphasizing fruits and vegetables in attractive combinations, such as a romaine lettuce/corn/tomato cold salad with the district’s popular housemade fiesta ranch dressing. There are enough components, including milk and water bottles, to assemble a reimbursable meal.

“We use all upscale packaging so kids have the perception that they are at a commercial food truck,” D’Amico says.

Meanwhile, the entrees are chosen for their appeal to the middle/high school demographic and have included such choices as street tacos, barbecued pork sliders and boneless chicken wings.

While the B-Town Express is loaded with production equipment that includes a broiler, air fryer and panini grill, almost everything is currently prepared in the kitchen of the school where the truck stops on a particular day.

“Originally, we thought we would cook some of the food [on the truck] while they waited, but that didn’t work out very well, so now most [of what we serve] is being prepared inside and then kept warm on the truck,” D’Amico says. “Generally, we batch cook and then bring it out.”

Despite some of the early hiccups, D’Amico deems the addition of the B-Town Express a success for her program.

“One of my concerns when we first opened was that we would take some of the business from inside the building, and a little of that does happen,” she says. “Some of those who would have eaten inside now go out to the truck, but the big thing is all the [paid] students [who now use the truck]. What it means is that those students are willing to pay a little bit more for something different and a little more upscale.”