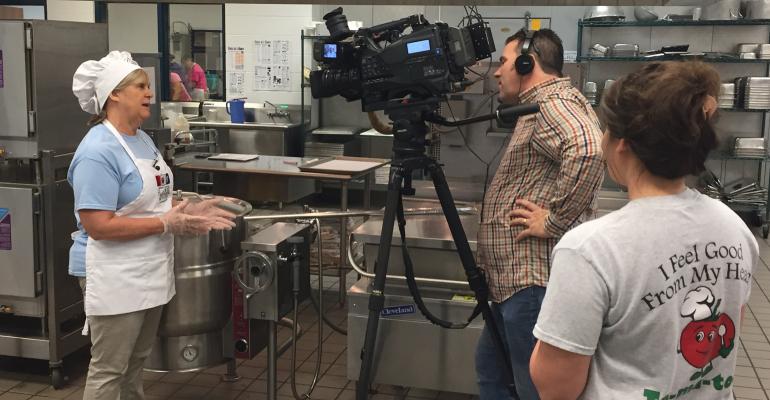 Randolph County Schools was able to affect foodservice perceptions by offering parents a chance to see first-hand how meals are prepared and served.

When Kelly Green, school nutrition assistant director of Randolph County Schools (RCS) in Asheboro, N.C., noticed a slight decline in school lunch participation among the district’s 17,500 students, she wanted to find out why. She began with a basic survey that was sent to both parents and students asking straightforward questions like, “Does your child eat with us?” and “Does he/she like the food?” She asked about customer service as well as their perception of the facilities, too.

More than one hundred students and over 450 parents responded to the survey. But the responses were not what the child nutrition department, made up of Green, Donna Osborne, director of child nutrition, and Jayme Robertson, supervisor and registered dietitian, expected.

“We found that there was a lot of misinformation floating around—especially among parents—about the types of food we prepare, how we prepare them and the cleanliness of our facilities,” says Green. “As we got our arms around the feedback, we knew that we needed to find a way to address the misconceptions about our program.”

They decided the best way to set the record straight would be to show parents in particular how RCS prepares food, how much of it is cooked from scratch, how clean and sanitary the kitchens are and how professional the staff is.

And so, Parent Day was born.

“Too many parents thought we were simply reheating frozen food and plopping it on a tray for their children,” recalls Osborne. “But more than half of our entrees and sides are made from scratch. And our team is passionate about the quality of food we serve.”

“Well before the nutrition guidelines, we decided to go back to scratch cooking wherever possible,” says Osborne, who has been with the district for 18 years. “When you make something from scratch, not only is it better for you, but it tastes better, too.”

The foodservice department chose a day for parents to come tour the kitchens of four schools in four separate quadrants of the district while in full-tilt.

“It was a two-hour session from 8:30 a.m. until 10:30 a.m.,” says Osborne. “We wanted parents to see our kitchens and staff during a real service. We wanted them to see real food being prepared and served.”

After parents toured the kitchens, they went on to a presentation by the child nutrition department that detailed more about the operation and how it not only complies with USDA regulations but how it also goes above and beyond for the sake of the students.

“Parents were surprised by how much food is made from scratch and by how fresh everything is,” says Green.

“They learned how involved child nutrition is,” says Robertson. “They were able to see the prep and final product. There’s really nothing that can replace being able to walk through a commercial kitchen and see a foodservice professional mashing and mixing 150 pounds of potatoes or forming meatloaf into loaves.”

Parents also had a chance to ask questions and offer suggestions.

“One suggestion came from a parent who thought it would be useful to send out a newsletter to parents with a recipe on it for a dish we make in house,” says Osborne, adding that the local news media got word of the story and ran a few segments that showcased the behind-the-scenes operation at RCS as well.

Going forward, RCS plans to host regular Parent Days at varying times so that working parents have a better chance to attend. And while the numbers weren’t staggering (about a half dozen parents ultimately attended the tours despite a couple of dozen signups), the event and the process taught team some valuable lessons.

“We believe in our food and we love the food that we’re preparing for our kids,” says Osborne. “In many cases, it’s going to be the best meal they get that day and in some cases it may be the only meal they get. With so many busy families out there and parents trying to figure out ways to feed their kids, we can help. We found that a lot of people don’t understand what scratch cooking even really means or what types of food we really serve. This has given us a platform to build on and we will continue to do so.”