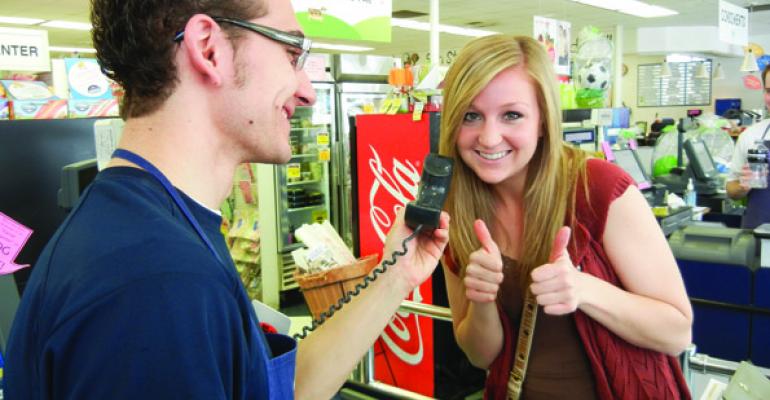 It became a campus-wide buzz at Brigham Young University this past spring: a soft drink promotion called Shop Happy that boosted traffic and enthusiasm while driving product sales at the Creamery on Ninth campus retail store.

It involved calls at random times to the cashier station with the message “Coca-Cola’s calling” to inform the customer at the register of a prize. These ranged from ball caps, t-shirts, and beverage products to gift cards and even iPads. Other times, the prize was simply a payment for whatever the customer had in his or her cart.

The random nature of the calls meant that customers could never know when one might be coming, but the anticipation created a real and continuing sense of excitement, says Dean Wright, director of dining services. “People were still coming in, hoping to get a call, even after the promotion had ended,” he says.

BYU Dining used $5,000 from the promotional budget associated with the vendor to fund the initiative. To ensure integrity, the call schedule was determined by a third-party service (random.org) that generated the calling times.

The only person who knew the schedule was Marketing Manager Chris Justice, and he was charged with making the calls at the exact times and dates decided by random.org.

“At one point, I had to make calls from California,” he joked to an audience at the recent NACUFS “Neighborhood Retail Market” preconference session, where he and Wright made a presentation about the promotion.

The calls ranged from three to eight a day over a two-month period, with no one (except Justice) knowing how many or when. In the end, the promotion yielded almost 500 winners. Their pictures, along with their prizes, were posted in real time on a c-store wall to further promote the campaign.
“This is so much better than having just a single winner, where the person is highlighted for only a few minutes,” Wright says. “With winners every day, the excitement was high over an extended period.”

The types of prizes given away each day were more controlled than the call schedule. Wright says he wanted to give them away in a way that would not tampen enthusiasm but build it, so the priciest items were held back for a while: “You want to engage people early, but also hold back some of the nicer things for later. We wanted to start heavy and end heavy.”

That excitement certainly built Creamery sales. Coke product sales alone were up by double digits, with its Dasani water products—which had a special display associated with the promotion—up 33 percent.

“It was truly a soft-sell promotion,” Justice adds. “It really got students to feel positive about our sponsor.”

For a video from BYU about the promo, go to http://tinyurl.com/canyjlb