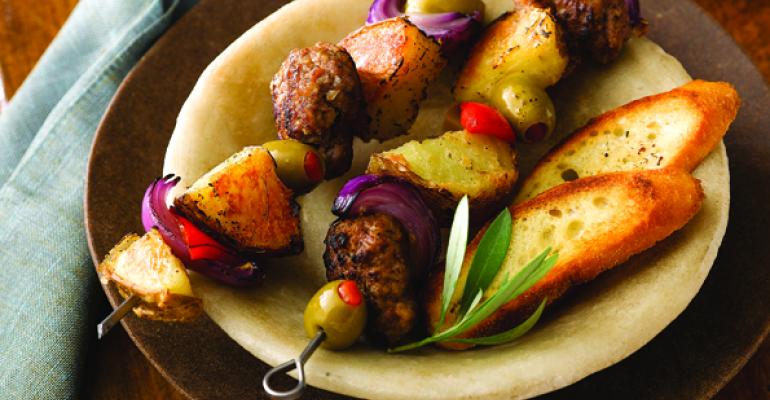 2. For twice baked potatoes: Cut potatoes into uniform pieces of approximately 1 oz. each. In large pot cover potatoes with cold salted water. Heat just to a boil. Simmer until just barely fork tender. Drain well and shake or stir over heat to dissipate steam and roughen edges of each piece. Toss potatoes with oil and seasonings. Mix to coat each piece and arrange on oiled sheet pans.

3. Bake potatoes at 375°F until golden brown, about 30 minutes. Turn as needed for even coloring during cooking. Hold uncovered up to 1 hour.

5. Cook lamb patties on hot (350°F) grill until nicely browned on both sides, and an internal temperature of 130°F is reached. Hold covered up to 1 hour.

7. For assembly of kabobs: Brush smoked paprika oil on both sides of each bread slice. Toast on hot grill or oven until golden on both sides. Reserve.

8. Working in batches, skewer one olive onto long pick or bamboo skewer.

10. Pipe one half oz. of aioli onto each reserved toast slice. Insert one skewer into each toast slice at an angle that permits arrangement on service line. Hold uncovered up to 1 hour.