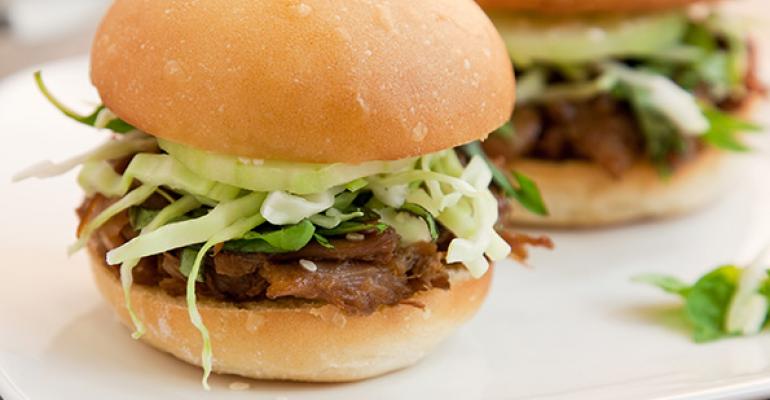 1. Place duck meat into mixing bowl. Pull apart any large chunks of meat. The target size of the chunks should be no more than 1”x2-3” in size. Add ½ cup Thai sauce to the meat and toss to coat each piece.
2. For the vinaigrette: Measure all vinaigrette ingredients into a mixing bowl except for the peanut oil. Whisk to incorporate, making sure the sugar dissolves. Slowly add peanut oil in a thin stream, using a stick blender to emulsify.
3. To assemble the sliders: Place oil in hot skillet and add one portion of duck meat. Allow to cook for 1 minute, until hot an beginning to brown. Remove from skillet, add hoisin sauce to coat the meat. Assemble in this order: slider bun, 1.5 oz. heated duck meat, 1 tsp. shredded cabbage, 1 tsp. red curry vinaigrette, 1 slice cucumber, ¼ tsp. sesame seeds.

A quick look at the California Baptist University menu
Jun 09, 2021