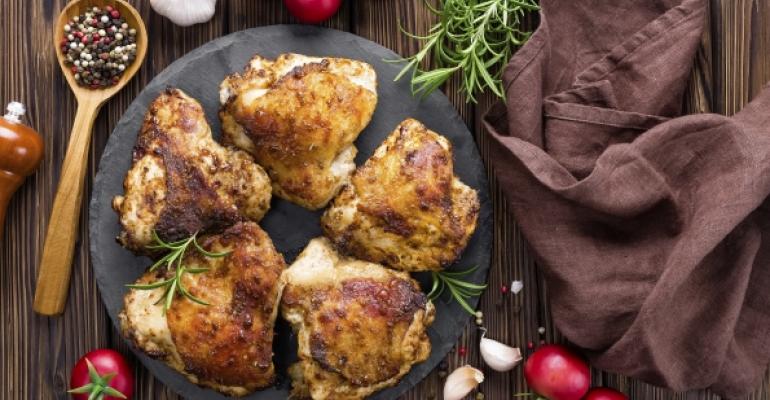 When it comes to the favored cuts of chicken, the breasts and wings get most of the attention. The white meat breast has a health halo, and wings have soared over the years as wildly popular appetizers and snack items.

But operators say it is important to menu other parts of the chicken for several reasons. Chicken thighs and legs are less expensive than breasts and wings, and they are adaptable to many delicious presentations.

Zack Bruell Restaurant Group in Cleveland has chicken thighs on the menu at all six of its restaurants. Chef and owner Zack Bruell says, “Chicken thighs have more flavor than chicken breast,” he says. “Thighs are moister, which is paramount.”

He adds that while it is easy to inadvertently dry out a chicken breast during cooking, that rarely happens with thighs and legs.

Bruell says there is another important reason for menuing chicken thighs. “They are also much less expensive,” he says. “It’s a good way of making up your food costs. On the menu you’re going to have things that don’t make your food costs, so this balances that out.”

In fact, according to the Tyson Chicken & Menu Economics Report 2016: “Using new or nontraditional lower-cost cuts of chicken” was one of the top tactics foodservice operators employed to decrease or control food costs. Among noncommercial foodservice operators, this ranks fifth among responses, with 32 percent of all respondents saying they address food costs this way. The top response, by 69 percent of noncommercial respondents, was: “Using chicken ingredients that have multiple menu applications.”

The Tyson report — which was conducted in February by Penton Research — also found that “Using new or nontraditional lower-cost cuts of chicken” ranked among the top responses cited by commercial foodservice operators. The method ranked seventh, with 19 percent of operators saying they menued those cuts. Again, the top answer was: “Using chicken ingredients that have multiple menu applications,” reported by 57 percent of respondents.

The key is to prepare the thighs in a way that offers great flavor and texture, experts say. At one of Bruell’s restaurants, L’Albatros, the Chicken Confit features a crispy leg and thigh slow cooked in chicken fat and served with  spӓtzle, paprika and roasted garlic jus. At Parallax, another of Bruell's operations, Peking Style Chicken has become a popular item. “We flavor it with the spice mix that you would use with Peking duck, and then we glaze and slow cook it, and serve it on top of a Japanese vegetable pancake with hoisin sauce,” Bruell says.

Other operators say consumers really like the moistness of properly prepared chicken thighs. At Bok A Bok Chicken, a quick service  Korean fried chicken operation in Seattle, cofounder and executive chef Brian O’Connor says the boneless, skinless thigh is the signature fried chicken dish. The boneless skinless thigh is also available on sandwiches. “We find that brining the thigh gives us a tender and juicy piece of chicken that complements the crispy crust that we are known for,” he says.

When preparing the fried thigh, O’Connor says the most important factor to take into account is to have the proper amount of batter. “Too much batter on the thigh and the chicken is masked in crust and the ratio of juicy chicken to crunchy crust is off,” he says. “Too little batter and the meat of the chicken will be tough and chewy.”

Spices also can play a key role. Fried chicken is very on trend right now, and in addition to the popular hot chicken and other fried chicken options, global flavors are a favorite among restaurant customers. At Johnny Mango World Cafe and Bar in Cleveland, the Bangkok BBQ Chicken consists of four chicken thighs “seared over red hot coals” with garlic sauce. Owner Shelley Underwood says the dish has been a popular item for years.

“My business partner who helped create Johnny Mango used to backpack to warm climates and collect street vendor recipes,” she says. “We are no longer partners, but the chicken remains. Sloppy street food fits into our world cafe vibe.”

Thighs also feature prominently in the restaurant's Jamaican Jerk chicken, which Underwood says are rubbed with a jerk paste and topped with mango salsa. These items are longtime favorites among customers, she says.

Using the thighs and legs is becoming more popular as consumers look for new and interesting preparations and operators explore ways to trim costs and satisfy guests’ demands for creative menu items and bolder flavors.