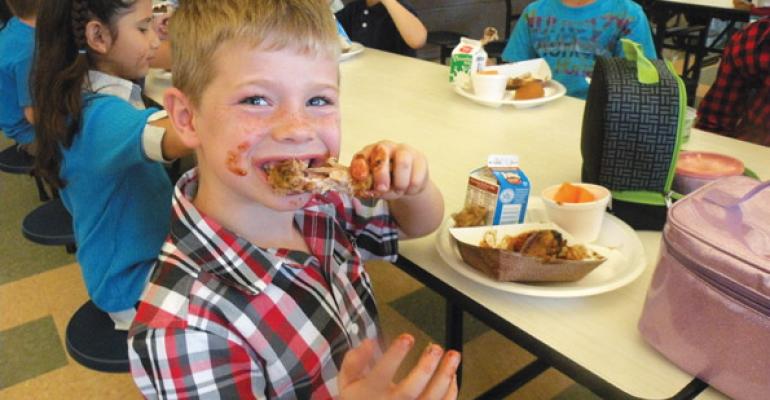 In a district where a la carte sales make up half of annual school food revenue, FSD Linda Stoll has strategized to make many of these meals qualify for reimbursement.

Colorado was one of the states that took an early stand on moving toward healthier meal choices; as its largest district, JEFFCO has often been at the forefront of the resulting initiatives.

Under executive Director Linda Stoll’s guidance, JEFFCO was a pioneer in moving to healthier beverage requirements and an early adopter of the Alliance for a Healthier Generation guidelines. In a largely suburban district where a la carte sales make up nearly half of the district’s revenue, that’s had a big impact.

After taking on oversight of the district’s student store and vending operations five years ago, nutrition services worked closely with school principals to develop win-win profit-sharing programs with them and make sure the stores offered reimbursable meal options.

“We charge the same for an a la carte store entrée that we do for a reimbursable meal, so sides are offered free. We encourage customers to take a milk with the sides so it is reimbursable for us,” she adds.

Lunch participation has varied over the last several years. At 50%, the elementary rate has dropped somewhat. But at 54% and 22%, middle and high school rates, while initially down, are now higher than before. That is the result of economic pressures on households, Stoll believes. A supper program is under consideration for next year.

Production is handled at individual school kitchens, but a building that once housed a central bakery does central production for charter schools, which add about 5,500 students to district enrollment. Stoll has contracted with vendors for pre-cooked meal components that can then be customized when finished at individual schools.

Complying with new meal pattern regulations has been a challenge. As a higher-income district with more cash sales, it has been harder to get students to change habits and take additional fruits and vegetables when they don’t want them. Stoll has experimented with vegetable juice flavored with fruit juice and with packets of dried fruit. It has also been a challenge to get calories into high school meals so they meet minimums; sometimes nutritious desserts (like frozen fruit juice sherbert) have helped, she says. Fruit and vegetable cost increases are pushing the district’s food budget; meal prices may have to be raised next year.