ADVERTISEMENT
We got the beet
Jenna Goodale/Taher, Inc.

Beets are popping up (or taking root, should we say) on a vast cross-section of menus, from buddha bowls to beverages and beggars’ purses. Early adopters of the beet trend, Charles City (Iowa) Community Schools’ Taher foodservice team made chocolate beet cake for a recent Harvest of the Month lunch, showing the versatility of the rootsy veggie to kids — who are raising their hands if they like beets. In addition, beets in liquid form can add that earthy touch to juices and smoothies, too.

The chicken wing sauce invented as a late-night snack at the Anchor Bar in Buffalo, N.Y., in 1939, has created a spicy ripple effect reaching far beyond the western New York region. Buffalo cauliflower, Buffalo quinoa, Buffalo chicken flatbread, Buffalo linguini and these Melt Shop Buffalo wing fries by Centerplate for lucky Miami Dolphins fans…there’s no end to what chefs will do with the tangy sauce, whose flavor profile fits right into today’s big, bold preferences for taste (think Flamin’ Hot Cheetos).

The high and the low
El Naranjo

Speaking of Cheetos, chefs have been sneaking off to the forbidden center snack aisles of the grocery store for guilty pleasures like Dr Pepper-glazed short ribs, Frito pies and other unique uses of the kind of snacks we all sneak. Chef Iliana de la Vega of El Naranjo in Austin, Texas, created this peanut butter and jelly ice cream.

During tough times, sometimes the only viable answer is cookie dough. Americans as a people have an especially soft spot for childhood treats, according to the Culinary Visions Panel’s 2018 Global Indulgence Report, which looks at consumers around the world and why they make the decision to splurge with their diets. The report found that 58 percent of American consumers agree with the statement “I prefer ordering desserts I enjoyed as a child,” compared to 45 percent of British consumers and 38 percent of German consumers. But the indulgence of a sweet dessert has to be worth the splurge (78 percent of Americans agree, according to the report), and one of Americans’ all-time “favorite things,” is comfort food. Keep an eye out for cookie butter as well.

In a 2019 predictions report by the SRG Culinary Council, Top Chef winner Hosea Rosenberg is calling celtuce—a lettuce cultivar—“the new kale.” Time will tell, but as health scares with romaine lettuce and other common salad ingredients dominated headlines last year, chefs could be looking for something totally different and specialty-grown like celtuce.

Since carbs have taken on the mantle of villain in the diet world lately, pasta has adapted itself for survival, showing up in versions made from lentils, chickpeas and other high-protein alternatives to white flour. UConn chefs ramped up this lentil penne with chickpeas and veggies.

Pintxos are the new tapas
Olives from Spain

In the Basque language, pintxos means “thorn” or “spike,” and pintxos are snacks small enough to be skewered on a toothpick, and that’s where they differ most from tapas. They can be as simple as olives, served warm in an infused oil or pickled beets spiked onto dark brown bread as a passed hors d’oeuvre or a party starter for an event.

Superfoods were just the beginning. Now, more consumers—not just athletes and hippies—want to know exactly what their food can do for them. Whether that’s plumping up cells to fight Mother Nature’s march across our faces or giving us the vital energy needed to make it through a day in modern society, people are looking to food for not just medicine but also for answers and solutions for everything from glowing skin to mental clarity. According to Datassential, more than 300 new products feature nootropics (aka “smart drugs”). In New York City, a fresh nut milk bar and café, Tulo House, is set to open in January 2019 with fresh, organic nut and oat milks (above) “custom-zhushed” with collagen, CBD, adaptogenic mushrooms and more. Christie Lombardo, founder of Freshyfare, has created collagen kisses, chocolate in the shape of plump lips on a stick. Lombardo says she’s looking ahead to working with CBD in the coming year.

Matcha madness
Sunday at the Museum

Before adaptogens and other wellness-boosting ingredients stormed the spotlight, matcha—said to contain hundreds of times more antioxidants than brewed green tea—was the first green on the scene. Now, chefs like Deuki Hong at Sunday at the Museum, the open-to-the-public café at San Francisco’s Asian Art Museum, are combining matcha with other trends, as in this gorgeous boba tea on the museum café menu.

The joy of being bitter
Viennetta/iStock/Getty Images Plus

Bitters have come out from behind the bar and onto the menu. Menu references to the term “bitter” have risen more than 22 percent in the past four years and are projected to grow an additional 18.1 percent in the next four, according to Datassential SNAP! and Haiku.

Sorghum as an ingredient
Yale University

Sorghum was once used mainly for molasses, but chefs are now appreciating the grain’s ability to stand on its own, popped like popcorn and used as a conversation-starter on a plate (conversations could include the African Diaspora, for starters). And sorghum is playing a big part of Yale University’s ongoing sustainability initiatives, shown here as part of chocolate bark.

Anything “overnight” is appealing to the busy breakfast crowd: Customers who want a good breakfast but don’t have time for a leisurely brunch on most days (sigh!). This example contains tart cherries, an up-and-coming superfood star.

This forest mushroom stroganoff at the University of North Texas is a great example of how mushrooms are especially suited to take the place of meat in hearty, stick-to-your ribs wintertime classics. As we move in a more plant-forward food direction, it’s nice to know comfort food is still available. 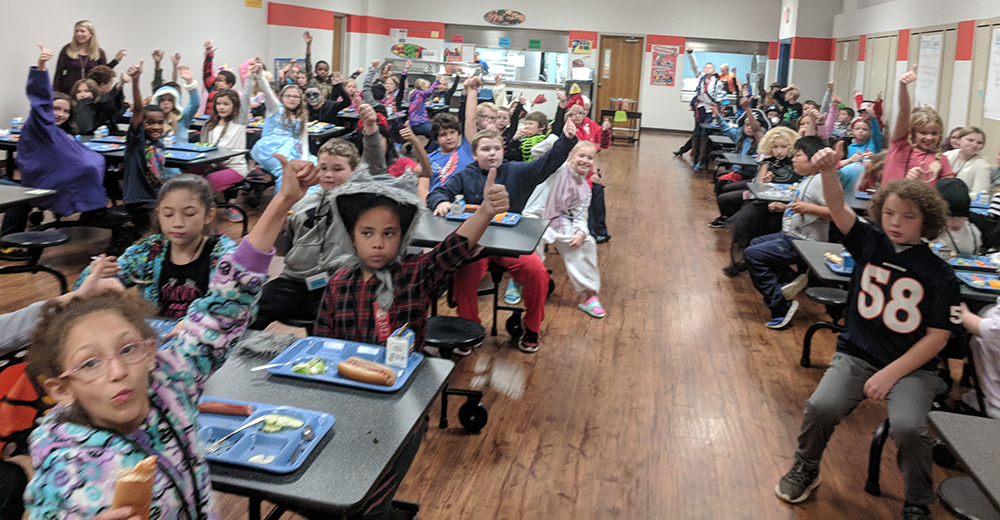