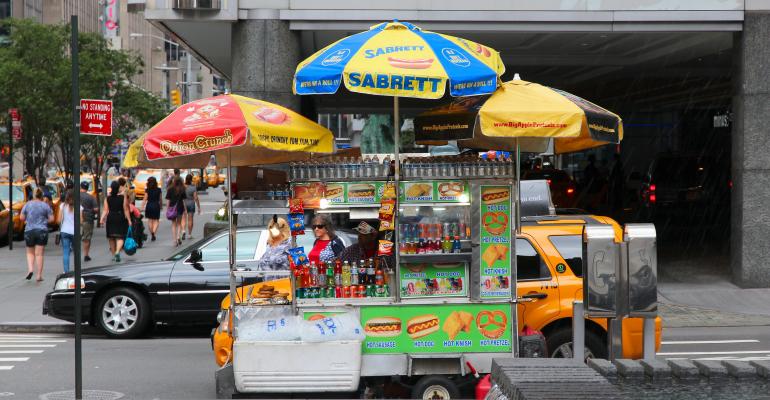 What’s your city’s worst famous dish?
For Mark Bittman, that’s the dirty water dog of New York City. In the latest issue of Lucky Peach, Bittman describes this infamous grab-and-go option as “served just above room temperature, held warm all day long in tepid water (somehow not a breeding ground for bacteria).” He goes on to say that this hot dog makes New Yorkers look bad. Also in the issue is San Francisco’s chowder bread bowl.

Read more about the food that makes major cities cringe>>

Cooking for the Queen of England
Darren McGrady, author of “Eating Royally,” recently dished with recipes-plus.com on what it was like to cook for Queen Elizabeth, Princess Diana and the rest of the royal family for more than 15 years. McGrady revealed that while the queen isn’t a picky eater, she draws the line at too much garlic or onions.

Secret ingredient for egg-free pancakes
Aquafaba is the term for the liquid you find in a can of chickpeas. Serious Eats’ Food Lab has found a way to incorporate that into a pancake recipe, opening the door for vegan pancakes that are also light and fluffy. “For vegans who have longed for light and fluffy pancakes and waffles, there has been no better advance in cooking technique that I can think of,” raved J. Kenji Lopez-Alt, cookbook author and editor at Serious Eats.

Learn how to use aquafaba for pancakes>>