At Boston College, students recently began asking for acai bowls, which could be the most buzz-worthy breakfast bowl out there. Long a breakfast staple for those in the know on the coasts, this bowl is rising in popularity morning by morning all over the country.

What is congee? It’s the rice porridge that’s been a breakfast staple on the other side of the world for a long time. Nazim Khan, CEC, executive chef at Bryan Health Medical Center in Lincoln, Neb., grew up in Bangladesh and remembers eating congee at home, topped with chili sauce, scallions, sometimes raw onions and a fried egg. He’s now developing a prototype of congee for the hospital’s retail menu.

Part tropical drink, part Elvis sandwich, this banana-pineapple- peanut butter smoothie bowl from General Mills only feels indulgent. It’s protein packed with plain yogurt and the peanut butter, and can also include toasted nuts on top. Get the recipe here

This history of the Denver Omelet, an iconic diner dish, is slightly scrambled. According to Gunther Toody’s Diner, a nostalgic food blog, some say the Denver (or Western) omelet, with ham, green bell peppers, onions and cheese, was originally a cowboy food staple. Others say the omelet began as a breakfast sandwich created by Chinese cooks working on the railroad and lost the bread somewhere along the way. In its most current incarnation, the Denver Omelet has become a bowl, as imagined by Potatoes USA. Get the recipe here

When combined with coconut milk, agave nectar and a trio of healthy seeds, raspberries and mangos become a powerhouse of a breakfast bowl. Get the recipe, which was developed by the National Processed Raspberry Council.

Cornell University’s Breakfast of Change initiative is bringing more veggies onto the breakfast scene. This starts with a base called Morning Zhou, a Chinese porridge/brothy soup with jasmine rice that’s cooked with chicken or vegetable stock. “The students top their bowls with vegetables, so they often take less of the traditional American breakfast items and end up eating more vegetables,” says Anthony Kveragas, CEC, executive chef/manager at Carl Becker House. Get the recipe, which was developed by Cornell’s dining team.

The turkey sausage migas bowl is a great summertime breakfast bowl, with shredded jack and cheddar cheeses, onions, peppers, queso fresco and cool slices of avocado on top. The crunch factor comes from tortilla strips. Get the recipe from Butterball.

Honey swirled Asian-inspired porridge was developed by the National Honey Board just for FM. It’s a sweet take on the savory porridge trend that can be easily customized with a variety of crunchy, salty toppings and a swirl of honey. Get the recipe

Lazy morning muesli, a recipe from California Walnuts, is another customizer’s dream. Add fresh fruit, dried fruit, nuts, chocolate chips, whatever will make your morning crowd smile. Get the recipe 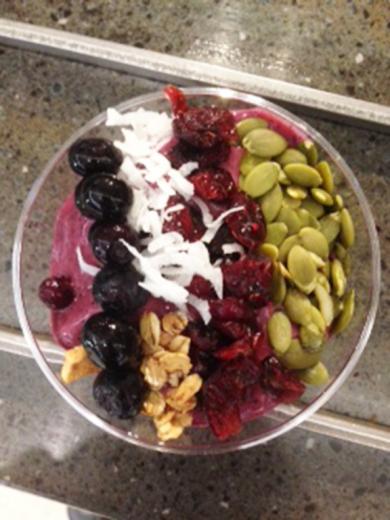