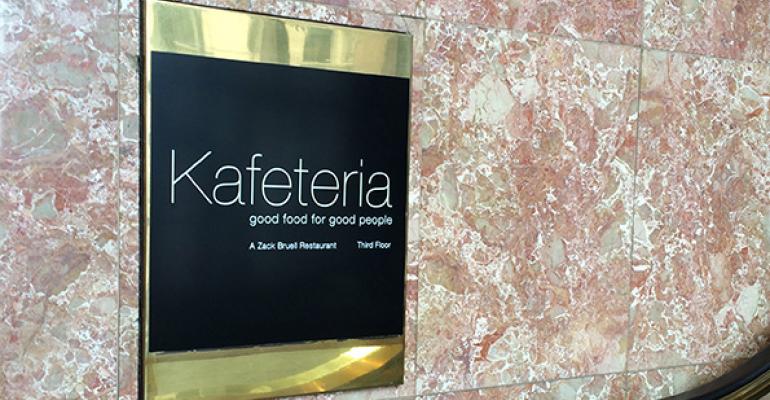 Kafeteria is a hidden lunchtime gem on the third floor of one of Cleveland’s tallest skyscrapers. Acclaimed Cleveland chef and restaurateur Zack Bruell’s first corporate dining concept opened a year ago, and now serves between 500 and 700 guests per day.

Lunch-break warriors are lining up, cafeteria trays in hand, for several stations. There’s a pizza oven, a noodle station, sushi made to order, a grill with sandwiches and barbecue, an upscale salad bar, a cook-to-order sauté station and a juice bar where such items as kale smoothies are blended fresh for each customer. It’s all prepared quickly to meet the schedules of a busy workforce. Kafeteria is also open for breakfast.

The 8,500-square-foot space accommodates the employees in the building and also a growing fan base of those working nearby. Bruell, who was initially only looking for space for his catering operation, was at first reluctant when he was approached about operating a corporate cafeteria.

A little history: Thirty years ago, the 45-story, 1.2 million-square-foot building was built for British Petroleum employees and was known as the BP Building. Now known as 200 Public Square, BP is no longer there, but 2,400 employees are. Up until a year ago, they had no in-house option for lunch.

A giant-size kitchen with some vintage, but still working, equipment was languishing on the third floor of the building, a kind of time capsule from the ’90s, the last time it had been used. Bruell was intrigued. But he knew he didn’t want to operate a run-of-the-mill employee dining operation.

Bruell has opened four Cleveland restaurants in the past five years, and local media has quoted him saying again and again that mediocre just won’t cut it for him.

“The one thing I won’t do is compromise,” Bruell says, explaining that if he puts his name on a concept, he wasn’t about to offer anything less than real food at a good value, the kind of food people expect from his restaurants. Once he decided to go for the B&I venture, the sprawling kitchen and servery areas were renovated, but heavy-duty pieces of equipment were salvaged and the lines in the kitchen stayed in place.

One key component of the corporate lunch business, Bruell learned, is that the great menu items he wanted to offer had to be delivered within a short time frame. Gone are the days of the one-hour lunch.

“At first, I had thought that people actually took time for lunch; I thought people had an hour,” Bruell admits. “I realize people are under pressure, and if they’re lucky they take a half hour. Which is a shame. But part of what this provides is a speedy opportunity to get real food.”

The check average, about $9, is comparable with other fast-casual lunch places workers can choose from around the downtown area.

“It took off right away, and we were worried it would be dead,” Bruell says. “Slowly, people around downtown found out about it, and we’d see more people in winter coats. That’s how we knew it was catching on.”

Check out the slideshow to see some of the definitely not mediocre menu items found on a recent winter day inside Kafeteria.