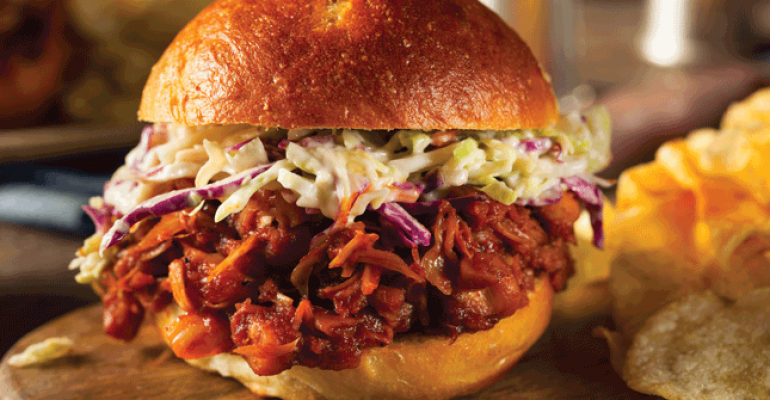 Ahead of the curve: Food trends for 2017

Here are eight food trends&mdash;ranging from just catching on to super hot right now&mdash;that should be on your radar as you develop tomorrow&rsquo;s menu.

Clean food, trust and alternative foods are top of mind for today’s consumer, according to Brian Darr, director of the Trendspotter publications at Datassential.

“Consumers expect a level of trust and they demand a level of real, clean ingredients,” Darr told a group of chefs, mixologists and food writers at the recent Trend to Table event at Rich’s Foods’ headquarters in Buffalo, N.Y. “And they’re looking to alternatives to everything.”

Those alternatives include plant-based proteins, dairy replacements and nut butters. (Not to mention the gluten-free trend, which isn’t so much a trend as a new reality.

“Nut butters are growing,” Darr says, pointing to a 158 percent increase of hazelnut spread on menus in the last year, going hand in hand with growth of breakfast sales. “Chefs are starting to use nut butters to cook with, and in the retail environment you’re seeing a lot more nut butters on the shelves.”

“Black beans are in the ‘ubiquity’ phase,” Darr says. “They have 30 percent menu penetration and consumer awareness has grown in the last four years. They’re in burgers, burritos, salads and soups. Their reach is extensive. Chickpeas are in the ‘proliferation’ phase. They have a little less menu penetration, although they are showing up in some fast-casual chains, and going beyond just hummus and falafel.”

Lentils are now in the “adoption” phase, growing 15 percent on menus since 2012. And black-eyed peas are in the “inception” phase, which means they are starting to catch on here and there but growing fast.

Customers are also seeking out alternatives to dairy, and products like almond milk, soy milk and coconut milk are showing up more and more. Cheese alternatives—made with cashews, for example—are now in the inception phase. See the Datassential chart for more items and where they are on the trend adoption nexus.

2. Housemade is the new local

Charcuterie plates are still going strong as an appetizer that’s everywhere, and housemade sausage with nontraditional flavor profiles has started to show up more.

And with fermented foods gaining a ton of popularity for their many health benefits, chefs are also upping their game with fancied-up pickled vegetables (think purple cauliflower pickled in fennel and vinegar) and housemade pickles.

American’s love affair with barbecue is only getting stronger, more intense and more thoughtful. Exploring different regions of ‘cue means customers are more knowledgeable than ever about styles and sauces. While there will always be a place for the sweet, ketchup-based barbecue sauce most of us grew up with, sauces like the vinegary North Carolina mop and the lesser-known Alabama white barbecue sauce are finding a place on the plate. White barbecue sauce (vinegar, lemon, mayo and black pepper) is traditionally used on chicken, but why not try it on roasted veggies or as a dipping sauce?

If you haven’t tried cooking with this yet, get on it. You can make a convincing pulled “pork” sandwich that vegans and carnivores alike can’t believe isn’t the real pig. The meaty texture can be smoked, sautéed, baked and more,
taking on any flavor profile you can dream up.

The next 4 food trends

Piggybacking off plant-based foods is algae. At a recent Sustainable Foods Institute event at the Monterey Bay Aquarium in California, plans for using algae in many futuristic food applications was discussed.

Don’t think this is too far off, however. Barnes hopes her team will launch the product sometime next year, and employees at a Google café in California are already feasting on the alternative product.

Inclusivity is the word when it comes to vegans, omnivores, vegetarians, pescatarians, die-hard carnivores and everyone in between. A more fluid, flexible vibe allows for a more thoughtful conversation when it comes to the menu.

“Loving vegetables doesn’t mean hating meat,” Jerry Ludwig said at this year’s Chefs Culinary Conference at the University of Massachusetts-Amherst. “We’re finding a better balance. Up to this point, it’s been vegetarians and vegans who have claimed the moral high ground, but that’s not so anymore.”

People are realizing the strain that a meat-based diet places on the planet and veggie-centric plates are becoming commonplace. And when they do choose meat or seafood, diners are more and more concerned about how the animal was raised and how the fish was caught.

Seeking out grass-fed beef for your menu items and buying—and using—a whole hog from a local farm are ways to respond with your menu to this increasing consciousness. Likewise, when offering seafood, it’s a best practice to work with local fishermen through organizations like Sea to Table and to check with Monterey Bay Seafood Watch before ordering seafood.

A perennial challenge of the onsite foodservice market is boredom—you are feeding the same customers day in and day out. In the past, monotony breakers like Taco Tuesday were the go-to solution. Now, smart operators and chefs are taking it to the next level with pop-up concepts.

The culinary team at Zappos in Las Vegas has been doing a great job with different pop-ups throughout the year, including temporary concepts with whole menus devoted to such things as tortas, sliders and even a grains pop-up, featuring red quinoa, greenwheat freekeh and wheat berries.

Don’t throw away that liquid in the can with the chickpeas! It can be whipped into a vegan merengue. The forward-thinking culinary crew at the University of Richmond was one of the earliest adopters of this trend in the college market. Recently, they whipped garbanzo water with a citrusy lemon flavor to create a foam that weightlessly floats on top of Greek chicken pilaf and also a quinoa, broccoli and kale curry. And in case you were wondering, kale is here to stay