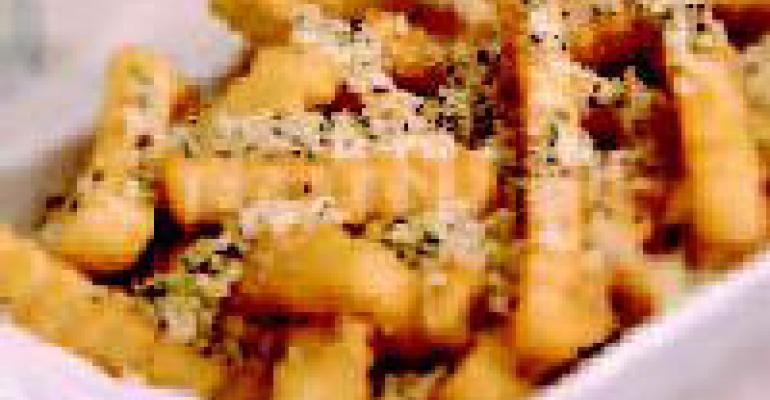 The “small plates”trend racing through the commercial foodservice segment has pumped new life into the way onsite operators are menuing, marketing—and capitalizing on— appetizers. Increasingly, onsite customers are ordering several appetizers, or small plates, together to create full meals. Or they may pair up an appetizer or two with a salad for a multi-taste and -textured lunch or dinner.

Whether the appetizer selections are upscale and brimming with chefs' creativity; purchased, prepared items; or mini-sized versions of old-fashioned comfort foods, they present a fun way for flavorcrazed customers to increase their variety and taste options at each meal.

Buffet facelift
At the University of Missouri, Columbia, Executive Chef and Director of Operations Daniel Pliska, CEC, recently switched the appetizer display at his daily lunchtime buffet in the University Club from large trays to a small plates approach.

“The look of the small plates is very nice, and actually much fresher appearing than a lot of big trays,” he says. “We tier them up in a staircase fashion, using different kinds of plates, tiles and surfaces, and the result is very impressive. We get guests coming here from all over the country, and they're amazed to see this kind of food in Columbia, Missouri.”

For $9.95, buffet guests can pick an entrèe, starch, vegetable and soup, but then they also get to mix and match appetizers from the small plates selection of between four to six different items a day. These can range from small wedges of roasted garlic and goat cheese tart to mini corn cakes [see recipes] and marinated asparagus crepe roulade with roasted red bell pepper cheese, among numerous other creations.

“We think this is what really distinguishes our buffet from anything else around here,” Pliska says. “It really allows for a lot of variety for customers, and an opportunity for our chefs to get creative. With lots of small plates, they can experiment with and learn different ethnic food techniques and flavor profiles.”

From a food cost standpoint, Pliska notes that offering a variety of different small plates is an effective way “to cross-utilize food from other functions.” When it comes to presentation, he claims they beat out large displays and trays as well: “Those bigger presentations look great when you first set up the buffet, but after a few people have been through the line, the dramatic effect is gone; with small plates, you achieve a perpetually fresh look on the buffet.”

Small plates to go
When CulinArt, Inc. got the nod to provide foodservice to New York University School of Law starting this past August, company chefs and culinary development experts decided to take a new route: marketing a large, varied selection of tasting portions and small plates, all fresh-made daily and packaged in small, grab-and-go containers.

Given the campus' location, in highly competitive Greenwich Village, it seemed an innovative way to dazzle customers and entice them to buy their lunch onsite.

Using eight-ounce, clear containers, Executive Chef Glenn Olson puts together 12 different small plate options daily, priced from $1.75 to $3.75 each. The idea behind the approach, he notes, is for customers to mix and match and “get in a lot of variety.” For instance, a customer might make up a meal by pairing together a few small plate selections; take two along with an order of soup; or combine one with a sandwich or salad.

“We're offering a full range of small plate choices, from extremely upscale selections to simple lo meins and slaw,” he says. But that simple slaw is no slouch—it's made with daikon radishes instead of the standard green cabbage, and there's a raspberry version, too.

To satisfy a customer base that's about 30 percent vegetarian, Olson prepares at least six strictly vegan side/appetizer items a day, using tempeh, seitan, soy wheat gluten and tofu. His repertoire (which boasted 40 recipes as of opening day, but will continue to grow) incorporates global cuisines and such creative twists as kim chee sushi and chipotle tofu with corn salsa.

Quick winners
At Wood County Hospital in Bowling Green, Ohio, Director of Food and Nutrition Services Timothy Bauman, CDM, CFPP, says prepared, purchased appetizers are “quite important” to the bottom line at his operation. “We sell them regularly,” he explains. “People purchase items like mozzarella sticks to accompany soup or chili, and appetizers make great accompaniments to salads as well.”

Bauman notes that lately, customers are even ordering appetizers (such as jalapeÒo poppers and mozzarella sticks) as a side in place of traditional french fries. “We also use them to complement themes in the cafeteria, such as the ‘Look Who's Turning 40' theme event we did this summer. The buffalo wing was 40 years old in July, so we offered several different kinds of wings.”

A large portion of customers who frequent the cafeteria at Brooke Army Medical Center in San Antonio are military personnel in the 18- to 25-year range, according to Chief of Production and Service Rebecca Felker, RD, CPT, SP. “Appetizers are extremely popular with them,” she adds.

To cater to those preferences, Felker offers rotating appetizers on the short order line and last spring; she introduced an all-appetizer island bar every Thursday. “On those days, we frequently have customers make a full meal out of appetizers,” she reports.

Catered affairs
The search for the “wow” factor in catered appetizers is a neverending task for onsite chefs and directors. Roger Beaulieu, director of culinary development for the Lake Success, New York-based CulinArt Inc., offers some ideas for tempting, updated presentations:

Despite the appeal of trendy new food adventures, Beaulieu notes that there's “still always an interest in comfort and familiar foods.” Thus, one of the company's latest hors d'oeuvre developments is Retro Foods— miniaturized versions of several American classics.

“Miniaturizing familiar things elicits quite a reaction,” he says, which will surely be the case when CulinArt-managed operations unveil their mini cheeseburgers and fries; mini hot dogs made with cocktail franks; mini meatloaf slices with a dab of mashed potato piped on top; mini chicken pot pies with peas and carrots; and one-inch cubes of deep-fried macaroni and cheese. “We expect the Retro Foods to be popular among more casual events, or to be used as one of several stations in large set-ups,” Beaulieu explains.