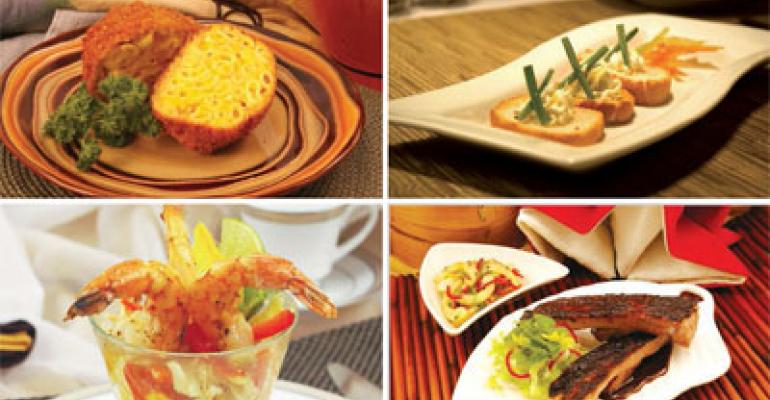 Basics & Beyond: The Bite(s) of a Winter Day

The appetizers at holiday celebrations should be festive, addictive and jolly.

“When it comes to holiday appetizers, you can't get away from regionality and ethnic backgrounds.

“My old Italian friends in Providence, RI, have to have calamari, Mussels Marinara, Clams Casino, Oysters Rockefeller, and shrimp cocktail at holiday parties.

Shrimp cocktail is a universal holiday appetizer. If you put shrimp cocktail in front of any group of people, they act like they've never seen it before in their lives and devour it! We've had to rearrange tables so the shrimp cocktail doesn't run out so fast. You can play around and do different sauces, too, other than the classic cocktail sauce. Try a spicier version, a Southwest version, or even Bloody Mary cocktail sauce.

“I grew up with a lot of Chinese-American people, and the holiday appetizers that many of us recognize and love are straight from the Cantonese Chinese take-out restaurant: mini egg rolls, pot stickers, spare ribs.

“Sushi is popular everywhere as an hors d'oeuvre, but especially on the West Coast.

“What was once only Spanish, the idea of tapas, has caught on in catering in the past five years in a big way. Small plates are a great way to offer holiday appetizers.

“The cheese platter is still big for the holidays. You can make it different by getting great cheeses — smoked cheeses, baked brie, Gruyere. At any store, you can now find an immense variety — you don't need to go to a specialty cheese store anymore.

“You can also update the classics. Stuffed mushrooms are usually filled with celery, bread crumbs and crab. You can fill yours with a trendier stuffing, like Portuguese sausage. Swedish Meatballs are another classic that you can really go in any direction with. People go crazy for little meatballs with BBQ sauce.”

We have a large Franco-American population in the surrounding communities of the hospital. We serve Tortiere, a French Canadian meat pie, to patients who are in the hospital on Christmas Day. Tortiere takes me back to holiday family gatherings of my youth in a small town called Madawaska in northern Maine, right near the Canadian border. We would attend midnight service on Christmas Eve, then return to the house for a reveillons, which translates to “let's wake up,” with food and music until the sun came up.

“This pie can be made into smaller pies for appetizer use, the same way you would see Mexican empanadas or Middle Eastern fatiri. There are many variations on the filling. Mixtures of pork, veal, beef or game meats all work in it, with seasonings being flexible too. Some recipes call for cloves, thyme, sage, nutmeg, cinnamon, and/or allspice.

“My grandmother's version used ground pork, and was seasoned with salt, pepper and Sauriette (Summer Savory, a signature seasoning in French Canadian cuisine with a piquant flavor). Each year, my grandmother planted, harvested, and dried this herb — enough for the whole family.”