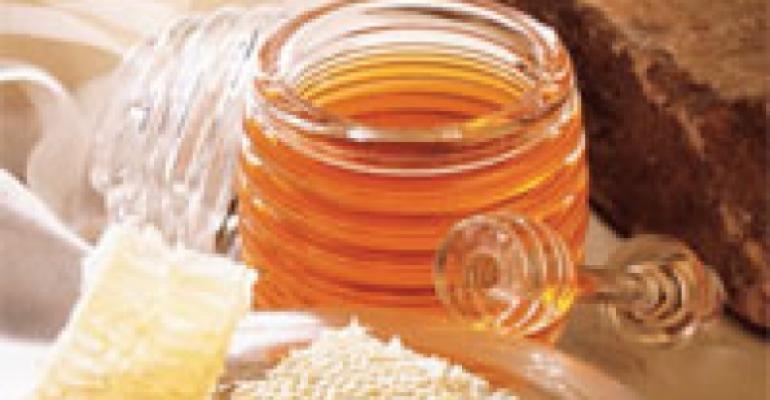 Buyer's Tipsheet: What You Need to Know About Sweeteners

Onsite operators have no lack of both natural and artificial sweeteners to choose from. Most can be placed in one of two basic categories: nutritive and nonnutritive.

By definition, nutritive sweeteners contain calories. The word ‘sugar’ is simply a term for simple carbohydrates. Sugars occur naturally in fruits, vegetables and can also be refined, then added to food items.

On the chemical side of sugar, all types of sugar end in “ose.”

The most common types are: Glucose (blood sugar) or dextrose, which is found in corn syrup, fruits and vegetables such as carrots or beets; fructose or fruit sugar, found in fruits, juices, honey, table sugar; and high fructose corn syrup.

Sucrose is a combination of glucose and fructose. This is the composition of table sugar, brown sugar, molasses and some other nutritive sweeteners.

Maltose is the sugar found in beer and bread. Lactose is “milk sugar,” and occurs in dairy products.

In food terms, the word ‘sugar’ most commonly refers to sucrose, which comes from sugar cane. When syrup from the sugar cane is refined, the syrup is separated into sucrose and molasses of varying strengths, then called light, medium and dark.

Confectioner's sugar (powdered sugar): Produced by finely grinding sugar to a powder and mixing with cornstarch. Can be used as a dessert garnish.

Coconut sugar (palm sugar): Made from the sap of the coconut palm; has a sharper flavor and is sold in blocks, either dried or with some water added.

Superfine sugar: Ground fine but not powdered. Dissolves quickly and is useful in batters and beverages.

Brown sugar: Has a distinctive brown color from the presence of molasses. A soft sugar, it is produced by adding molasses to refined white sugar.

Unrefined brown sugar: Really “less refined,” it has not been completely stripped down to a pure white crystal that is all sweetness and no flavor. Not readily available for use in kitchens.

Rock crystal sugar: A huge crystal sugar made by soaking a string in sugar water then letting the water evaporate, leaving ‘rocks’ on the string. Can be used as a garnish for desserts or drinks.

Fructose: Made from cornstarch or the simple sugar found in fresh fruits. 1.2 times the sweetness of table sugar. Can be used in most food applications as table sugar.

Raw sugar: natural, unrefined sugar made exclusively from sugar cane. Brown with a a large grain and nutty flavor. Can be used in place of white sugar in beverages; also for topping muffins or other baked goods. True ‘raw sugar’ is not sold in the US, as it may contain mold, insect parts or bacteria. When impurities have been filtered out it is known as muscavado, turbinado (brand name Sugar in the Raw) or demerera sugar.

Honey: Made by bees, honey comes in different flavors, depending on the plant that provided the nectar (for example, clover, eucalyptis or orange blossom honeys). Has about 25 percent more calories than an equal measure of sugar. Can carry bacteria and so is not for babies or those with weakened immune systems. Good for baking, sweetening hot or iced tea.

Molasses: A deep brown syrup produced when sugar is extracted from sugar cane. Can be used in baking and can substitute for honey, corn syrup or maple syrup.

Maple syrup: Made from the reduction of the sap from sugar maple, red maple or black maple trees. Most often used as a topping for pancakes, waffles and French toast. Comes in many different grades, which vary by state and country.

Maple sugar: Maple syrup boiled until it crystallizes and then is poured into molds. Sold as a candy or may be pulverized into a powder. Has a strong maple flavor and is good for baking for a pronounced maple taste.

High Fructose Corn Syrup (HFCS): Composed of the same two simple sugars (fructose and glucose) as table sugar, honey and maple syrup. It is corn syrup treated with enzymes to change about half of the glucose into fructose, making it super sweet. HFCS is found in soft drinks and many other processed foods such as yogurt, cookies, salad dressing, cereals, sauces, soup and even meats.

Golden syrup: A by-product of sugar refining made from syrup left behind when sugar crystals are forming. Golden syrup remains liquid and is used in candy where flexibility is needed.

Agave nectar: Has roughly the same calories as sugar, but it is sweeter, which can save calories since less is needed. It takes longer to influence blood sugar levels than sugar (low glycemic index). Can be used in place of honey to make a vegan dish.

Sugar alcohols (xylitol, sorbitol and mannitol): sugar-like compounds that naturally occur in some fruits and vegetables. Used in sweetening sugar-free baked goods, candies, chewing gum and toothpaste. Do not promote tooth decay. Used in processed foods, but are not a cooking ingredient.

Sugar substitutes are sometimes referred to as nonnutritive sweeteners, artificial sweeteners or low-calorie sweeteners, and are often several thousand times sweeter than sugar.

Many customers will seek out such sugar substitutes because they are trying to lose weight and/or are diabetic. Artificial sweeteners do not raise blood sugar and are non-nutritive: they have virtually no calories.

Some sugar substitutes are better suited for some uses than others. Specially formulated recipes are often necessary to make a baked item with acceptable texture and appearance when using artificial sweeteners.

Acesulfame-K (Sunette, Sweet One brand names). Discovered in 1967, approved by the FDA in 1988. Has a clean, sweet taste. Not metabolized by the body. Often found in gum, dry beverage mixes and gelatin.

It is 200 times sweeter than sugar and can be used in baked desserts as it is heat stable. Use it in a combination with granulated sugar when baking.

Aspartame (Equal, NutraSweet brand names). Discovered in 1965, approved by the FDA in 1974. Not suitable for prolonged exposure to high temperatures, as sweetness can be lost with heat. Can be added to pie fillings in no-bake pies. While considered safe, it is a risk for those people with the rare disorder phenylketonuria (PKU), who cannot metabolize the phenylalanine in aspartame.

Neotame. A derivative of aspartic acid and phenylalanine, approximately 7,000 to 8,000 times sweeter than sugar. Approved by the FDA in 2002 as a general purpose sweetener with no metallic flavors. It has been tested for beverages, a tabletop sweetener and for frozen desserts and baked goods.

Saccharin (SugarTwin, Sweet ‘N Low, Sweet Twin, Necta Sweet brand names). A sweetener discovered in 1879; has no calories and dominated the market for more than 60 years, but has been replaced largely by cyclamate. Still consumed by diet soda drinkers, dieters and diabetics.

Stevia (PureVia, Truvia, Sweetleaf, Sun Crystals brand names): A plant native to South America, Stevia is gaining popularity in the U.S. since being approved in 2008 by the FDA. Can be used in many food and beverage applications as well as for tabletop use.

For more information on sweeteners: