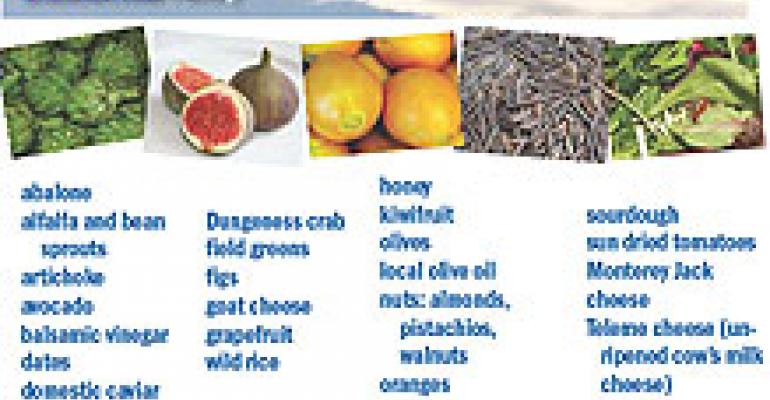 What is hot now is sustainable, organic, and local. But some would argue that the “sustainable” trend in foodservice actually emerged on the scene in 1971, the year that Alice Waters opened Chez Panisse, in Berkeley, CA. Which begs the question: Can a “trend” endure for more than 30 years?

Waters is generally credited with originating “California cuisine” and retains the reputation for offering the ultimate California cuisine experience. Her menu emphasizes the freshest seasonal ingredients procured solely from local farms. For example, Harpoon-caught Morro Bay Swordfish with green beans, fennel, and salmoriglio sauce appeared on the café menu this past October. And her daily menus clearly state, “All our produce, meat, poultry, and fish come from farms, ranches, and fisheries guided by principles of sustainability.”

Simply put, Waters capitalized on the natural assets of the region. California is blessed with the most varied geography of any state in the U.S., from its moist rocky coastline to its arid dessert and fertile mountain valleys. This diversity provides a bounty of delectable ingredients that are readily available to chefs throughout every season.

Historically, southern California (San Diego to Santa Barbara) was named La Tierra Adorada (“the beloved land”) by Spanish settlers. Now that region boasts the largest Hispanic population in the U.S (the Asian population in California is also the largest outside of Asia). Culinary influences here reflect blends from Mexico, Asia, the Pacific Islands and the U.S. In northern California menus tend to lean more towards Italian, French and Asian culinary influences.

Sourcing ingredients locally was also spawned by a movement in Italy that was quickly yet quietly embraced by chefs the world over. The Slow Food revolution began in Italy with the foundation of its forerunner organization, Arcigola, by Carlo Petrini in 1986. He was fighting the industrialization of food, which he believed was standardizing taste and leading to the annihilation of thousands of food varieties and flavors. The Slow Food organization spawned by the movement has expanded to include over 80,000 members in over 100 countries, and California has the most local chapters in the U.S.

That movement aims to preserve cultural cuisine, and in so doing, to preserve the food plants and seeds, domestic animals and farming within a given eco-region. The movement has become both a social and political one: it promotes consumer education regarding organic gardening; encourages the use of local and traditional foods; and organizes lobbying efforts against genetic engineering and pesticide use, for example.

Entrepreneurs and chefs are supporting the locally-sourced organically-grown trend by introducing artisan products—handmade in the classic tradition prepared with only freshest raw ingredients—every day. And though many are based in California (some of the most popular products include Laura Chenel cheese, La Brea Bakery bread and Scharffen Berger chocolate, to name a few) savvy chefs are sourcing such specialty ingredients from culinary artisans located across the U.S.

Regardless of the regional or ethnic diversity, the “trend” of California cuisine is the use of the freshest seasonal ingredients in recipes based on classic preparations refined with local ingredients.

responsible, what could possibly be the next big trend from California? If you have an idea, email this editor at [email protected] penton.com.