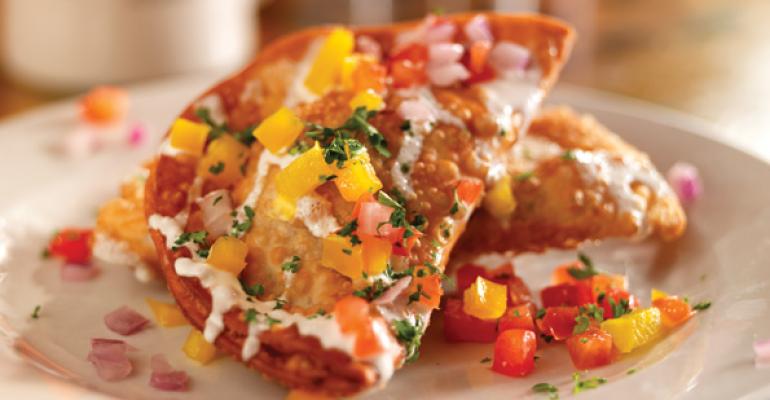 Like many other world cuisines, Cuban food makes use of lesser cuts of meat and simple starches.

In a sandwich-savvy foodservice operation, chances are, you’ll find some version of the Cuban sandwich or ‘Cubano.’ And that’s very good news indeed for customers who are fans of roasted pork, melted cheese, ham, tangy mustard and pickles pressed together in crisp bread.

But it would be a shame if you stopped there.

However, Wisel is quick to point out that very good things can come from taking old Cuban recipes and switching things up in terms of preparation method, ingredients and presentation. Read on to see Wisel’s fresh take on the classic Cuban recipe Ropa Vieja.

Introduce a few Cuban dishes with your own spin (and customize your Cuban sandwich, see sidebar at right). Your customers will discover a unique kind of craveable comfort food.

Ropa Vieja is a popular dish in Cuba and around the Caribbean. In Spanish, the name means ‘old clothes.’ It’s traditionally made with shredded beef cloaked in a bright red sauce of tomatoes, onions, chiles, peppers, garlic, tomato and cilantro. This sauce is sometimes referred to as “sofrito.”

A typical seasoning mix often includes the warm touch of cumin, and the dish is evidence of elements from Spain’s table crossing the Atlantic and finding a place in the Caribbean nations.

At the University of Miami Hospital in Florida, Ropa Vieja is a regular on the menu rotation, made with flap steak that’s slow roasted then pulled and sopped with the red sauce and served over rice.

The dish is a big hit with visitors and staff who try it, says Glensford Bennie, executive chef at the hospital. While Ropa Vieja is traditionally a stand-alone kind of dish in Cuba, it looks great on a plate with rice and beans or plantains.

“To update the old Cuban recipe, I use house-smoked haddock that’s been soaked in milk,” Wisel says. “The spiciness of the bright red chile sauce cuts through the rich sweetness and creaminess of the fish.”

Mashed potatoes and sweet onions make a pillowy bed for the fish. And to bring it all together, a great accompaniment to the fish is a salad mixture similar to a roulade called Salpicon.

Wisel’s version of Salpicon is arugula with roasted and diced zucchini and peppers, drizzled with a mustardy champagne vinaigrette. Parsley and lemon juice add a bright zing to the whole dish. This type of salad/sauce could add a lively Cuban flavor to any protein (think chicken or turkey).

Picadillo is, simply put, Cuban beef hash. At the University of Miami Hospital, it’s a hearty mixture of ground beef cooked with cumin, cilantro, paprika, onion, garlic and peppers. Some raisins and olives are also added, making the flavor something out of the ordinary.

“It can be served over fries,” Bennie says, “but we make it healthier by serving it over diced potatoes.”

At Kuba Kuba, a restaurant in Richmond, VA, Manny Mendez takes pork Picadillo and folds it into empanadas, which come out hot and crispy, and are served with a vibrant sauce, making for a festive plate.

Another popular dish in the U of Miami Hospital’s Cuban collection is Mojo Pork. The secret is definitely in the sauce in this case. Mojo sauce is a Caribbean condiment that’s usually made with olive oil, garlic, paprika and cumin. An acidic element—sour orange juice, vinegar or lime juice—is added, along with fresh herbs, often cilantro.

This sauce is said to have influenced some of the iconic barbecue sauces of the American South, especially those found in Florida, Texas and Louisiana.

Rice is a cornerstone of Cuban cooking. Ready to take on any flavor, this creates more opportunities in customization. While rice came from Asia, Cubans were introduced to it by the Spanish.

“In Cuba, we prefer white rice, served with the whole soft grain, as in most Latin-American countries,” writes Nitza Villapol in her 1987 book, Cuban Cuisine. “We also serve it tinted with saffron, tomato and annatto. When it is served tinted, we call it ‘rice and…’ [meaning that] the following ingredient will be the main element to prepare the recipe and will also be the determining factor in the dish’s flavor.”

Perfect for customization. At the University of Miami Hospital, Yellow Rice with Seasoned Chicken is a popular dish.

Bennie boils the chicken and then uses that water to cook the rice, imparting big chicken flavor into the dish.

“If you skip that step, you’ll miss out on the extra flavor,” he says.

Even the rice itself can be switched out.

“We alternate between rice, potatoes, sweet potatoes and cassava root (a tropical tuber),” says Mendez, who also mentions Ajiaco, a meat-and-potato stew with South American roots. It’s hearty comfort food that can include sweet potatoes, yucca, corn on the cob and chicken. When the stew is served, avocados or capers can be offered as last-minute customizable garnishes.

Some elements of a Cubano, or Cuban sandwich, are constants: roasted pork, ham, cheese and pickles. But, as with any icon, there is room for many different interpretations of the classic on a modern menu. Check out these four different translations.

What makes the Cuban sandwich so special is its balance of savory and sweet,” says Karen Kourkoulis, chef/manager of Passport Café, University of Richmond. “The sweetness of the ham and pork are nice foils to the tangy pickle and Dijon. We sell about 650 of these a month.”

Wasabi mayo makes this Cuban sandwich a little different than the rest. Another variation would be to include salami—an extra that’s found in parts of Florida and attributed to Italian immigrants working along-side Cubans.

The flavor of the newly introduced Cuban sandwich at St. Mary’s Regional Medical Center, Lewiston, ME, is simply “off the hook,” says Dennis Bouyea, Metz Culinary Management manager. A foil-wrapped brick is used to press all the porky, cheesy, pickle-y goodness into one sandwich that “flies outta here.”

The superstar sandwich is often served with a grilled pineapple to really set off that Caribbean feeling, Bouyea says.

Manny Mendez’s ‘Kubanaso’ gets an extra boost of flavor from the addition of chorizo sausage. There’s also mojo sauce incorporated into the sandwich, imparting the flavors of lime juice, orange juice, garlic, tomato and vinegar.