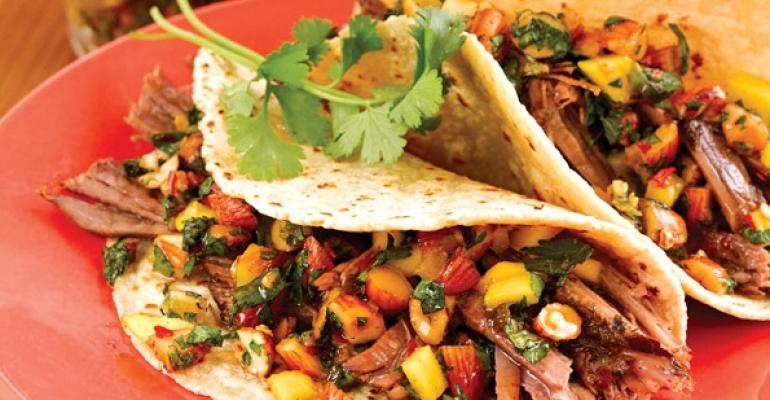 Chefs and customers are doing some delicious downsizing for &lsquo;mini Mex&rsquo; options with a spicier attitude.

Could this be the end of the burrito as big as your head? Chefs and customers are doing some delicious downsizing for ‘mini Mex’ options with a spicier attitude: plates that feature two or three small tacos, a perfectly puffed sopapilla or upscale quesadillas cut into fiery slivers.

“When you go to Mexico, you get three small tacos on a plate.” Koettke says.

“We’re too used to giant burritos here. With a few small, 4-inch tacos, you get to try different things, and that’s the fun part.”

At the recent Chefs Culinary Conference at UMass, de la Vega was demonstrating some amazing one-dish and small-plate Mexican food that can transport a person with just one bite. Her cool-with-kick Ceviche Verde (pictured, at left) is a two-bite revelation, crowned with a slice of lime.

She recommends quesadillas as an appetizer, keeping in mind that “it’s not only about cheese.” De la Vega names a range of quesadilla fillings from the real Mexico: roasted poblano pepper strips, mushrooms and corn.

Small slivers of quesadilla are a super versatile item, flexible enough to be dressed up or down. For black-tie events, Sinciline has layered sweet caramelized onions with marinated skirt steak into a soft white flour tortilla, grilling it and then slicing it into two-bite wedges and garnishing each with a slice of really good white cheddar cheese. Perfect for an elegant passed tray of hors d’oeuvres with the warm flavors of Mexico.

“In a more casual setting,” Sinciline says, “people really like mini quesadillas filled with chipotle chicken and Monterey Jack cheese.” He suggests a dollop of lime sour cream on top for a cool component that helps balance the heat of Mexican cuisine.

Another idea that’s worked well for catered events has been muffin tin tamales, really more of a method than a recipe. In either a full-size or mini-muffin tin, fill each cup halfway with masa, the traditional dough used to make tortillas and tamales. Then, any festive filling—ranging from dainty to rustic—can be nestled into the masa. At one Bayer event, Sinciline crossed cultures and sensibilities with tamale pâté pureed chicken and roasted peppers. It bakes up nicely and can be prepped ahead of time.

One Mexi-mini lunch item that has done well at Bayer is a small bowl of white chicken chili. Getting its distinctive flavor from dark-meat chicken sautéed in bacon fat, the soup is finished off with garnishes of sour cream, thinly sliced fresh jalapeno and a wedge of lime. Also on the Bayer lunch menu is a sampler platter with small enchiladas, tacos and tamales.

“We hold the mini tacos in a chafer on a round table with a toppings bar. “People can add guacamole, pico de gallo, cheese and sour cream to a plate and then just dip the tacos.”