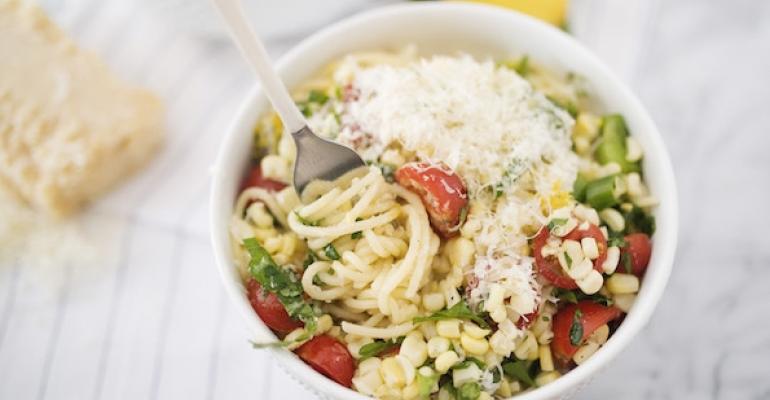 There’s no one correct way to offer vegetarian options on your menu. Forward-thinking chefs are not only putting the focus on fresh, flavorful vegetables but are taking the time to walk in a vegetarian’s shoes, and even getting creative with “fake meat.”

Approaches to serving great vegetarian options seem to clash: Is it better to elevate vegetables in their whole form or to attempt to imitate meat? On one hand, aggressively grilled carrots with a pesto of their own leafy tops can make a huge statement on the plate. But who says that box of veggie burgers kicking around in your walk-in can’t serve as inspiration also?

Today’s vegetarian menu options are free and fluid. Maybe it’s that work-of-art carrot centerpiece one day and a burrito stuffed with a diced black bean burger and poblano peppers the next.

From fake-meat roots to plant-forward present
Perched on steep, tree-covered hills and winding roads in the northern part of California’s Napa Valley, the campus of Pacific Union College (PUC) is breathtaking. It’s a Seventh-day Adventist Christian liberal arts school that was founded in the 1800s Gold Rush-era California. Today, the Bon Appetit-run dining operation serves about 3,500 meals a day—all vegetarian.

Jon Torres, general manager with Bon Appetit at PUC, grew up in the Seventh-day Adventist church. He says that while vegetarianism isn’t strictly required by the religion, it’s encouraged, and most church members follow a plant-based diet.

Historically, analog meats or “fake meat” products (think veggie burgers, “not dogs,” crumbled meat made of soy or tempeh) have been central to the food traditions of the Seventh-day Adventist Church. In fact, the church is widely credited with bringing fake meat products to the forefront of consumers’ consciousness. John Harvey Kellogg was a famous church member who invented cereal as we know it while he was also coming up with meatless products in his health and wellness resort in Battle Creek, Mich. Read more here about fake meat and the Seventh-day Adventists here.

But for PUC’s day-to-day dining menus, Torres and the kitchen team, including Executive Chef Eddie Jarrell, have decided to go a different way, focusing on California’s bountiful produce instead.

That’s not to say you’ll never see a fake sausage patty on the premises, but for the most part, menu options celebrate veggies rather than try to emulate meat.

“We’re not trying to emulate anything; we’re just trying to make good food,” Torres says. “Anything people do with meat, we can do with vegetables. It’s about creating beautiful dishes that taste good. Sometimes we run into obstacles or struggle with something, but we don’t let that stop us. We overcome.”

Vegetarian for two whole weeks
That same can-do spirit was the sentiment behind the recent Veggie Challenge, a Sodexo initiative developed by District Manager Mike Greenfield in which campus district chefs adopted a vegetarian diet for two weeks, eating at their own dining halls. That included Chef Donnie Hawkins, executive chef at Shenandoah University in Winchester, Va. He says he found the challenge to be an eye-opener when it comes to vegetarian options on menus around campus.

While Hawkins had an easy and enjoyable time eating vegetarian at Allen Dining Hall with its recently expanded vegan and vegetarian dining platform, when he was looking to eat plant-based in retail operations, particularly a a grill concept, he discovered that the choices were lacking.

Hawkins now says he’s “going back to the drawing board to recreate some vegetarian grill options.”

Other chefs on other campuses who participated found the salad bar, the soup station and the veggie burgers to be cornerstones of vegetarian choices, and in many cases, that the retail side could be doing a better job.

“The challenge for us culinarians is to make the rotation more attractive and change items more often,” says Andreas Ortner, executive chef at the University of Mary Washington, summing up the two-week experiment. “Some days there are better options than others and there needs to be a focus on consistency and variety. The days we used to say, ‘Go to the salad bar and have a salad’ are over.”

Fab ideas for faux meat
Meat analog products are often made with soy, tofu or tempeh. These products can be in the form of “chicken” nuggets, ground “beef” crumbles, veggie burgers and more.

Robert Sikkila, executive chef with Chartwells Higher Education at DePaul University in Chicago, says the hardest thing about making a vegetarian menu exciting is “staying ahead of the boredom.” While his team does a lot of scratch cooking, he recently developed recipes that use ready-made veggie burgers in unexpected ways:

Spicy black bean and poblano enchiladas: This recipe incorporates diced black bean patties instead of the traditional braised pork or chicken thigh. Add a cool salsa and no one will miss the meat. Get the recipe here.

Vegetarian Eggs Benedict: This recipe keeps a veggie patty in its whole form, as a substitute for the traditional ham or Canadian bacon. In place of an English muffin, it’s zucchini, all drizzled with sundried tomato Hollandaise sauce. Get the recipe here.