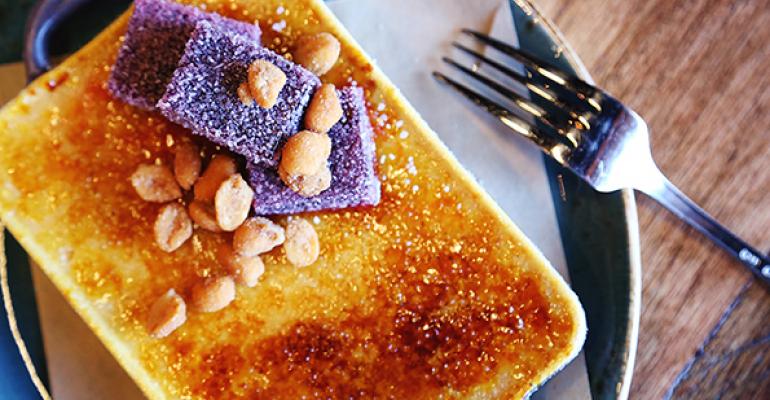 GALLERY: 12 Classic Recipes: Remixed &gt;&gt; Brightened up, lightened up, reinvented and transformed, old-school dishes with new-school twists add something special to the menu.

MOST CHEFS AGREE: Classic dishes are classics for a reason. In fact, when digging into a plate of an iconic dish like Fettuccine Alfredo, it seems almost wrong to mess with the formula. But, paradoxically, to a creative chef, sometimes a little bit of wrong is just right.

“I love fusion and it’s fun to mash up different cuisines and see how it plays out,” says Charles Twohig, sous chef with Metz Culinary Management at Pocono Medical Center, in East Stroudsburg, Pa. “You can take something that’s old and dead and bring it back to life.”

Twohig has used that Frankenstein-in-the-kitchen approach to breathe new life into an American diner classic: the grilled cheese sandwich.

“Whenever I have downtime in the kitchen, I start playing around,” Twohig adds. At a previous restaurant job in the Philadelphia area, looking to get away from the Philly cheesesteak, Twohig created a pot roast-inspired sandwich that featured roast beef and stew vegetables sliced thin on a mandoline on top of herbed ciabatta bread.

“I’m really into new-school fusion gastropub cuisine,” Sweeney says. “People always revert back to home-style cooking, but if you can take grilled cheese and turn it into something people will talk about, that’s what it’s all about.”

The Southern Breakfast Bowl: “If I was going to write the perfect country song about breakfast in the South, then I would have to mention cage-free eggs, stone-ground grits, pimento cheese and love!” Quasha says. The creamy texture of the grits elevated with the spicy citrus flavor of the pimento cheese accented with Sriracha and lemon juice and a fresh tomatillo salsa is rounded out with the flavor and texture of the egg. “All this dish needs is a glass of sweet tea and a rocking chair,” he adds.

The FGTBLT: “Nothing says Americana like a BLT sandwich,” Quasha says. “Our BLT takes the classic sandwich ideology and twists the taste of the South into every bite.” The Fried Green Tomato BLT adds crisp fried green tomatoes and Cajun remoulade in a sweet, spicy and savory sandwich.

Reinvented diner classics like the grilled cheese or tuna melt make great throwback menu items, and so can fancier old-school French dishes with unexpected ingredients and presentation, a school lunch pizza that’s veggie-forward, a breakfast bowl that combines a lot of Southern food icons or a lightened-up Alfredo sauce that’s heart healthier than
the original.

Cafeteria Classic Revamp
Jason K. Morse, CEC, executive chef for Douglas County Schools, in Colorado, works with kids to get them eating fresher, healthier versions of items they know and love. What better item to put a twist on than the kid-favorite pizza?

“We worked with our high school team to make a veggie pizza that would be cool, hip and unique,” Morse says. The updated slice is heavy on the veggies, light on the cheese and zested up with a balsamic reduction. And there’s not a greasy pepperoni in sight. “The balsamic glaze fit the bill, and this pizza was born.”

Morse also worked with students to create a cup of noodles that’s a riff on the Styrofoam cups of ramen that kids seem to have a cult-like appreciation for. The new version is similar, but much healthier, with less sodium, and it’s been a hit, Morse says.

Another reinvented school lunch classic that has been well received at Douglas County Schools is the potpie: the updated version includes roasted turkey with low-sodium gravy, doubled-up veggies and a whole-grain biscuit.

“Kids have been diving in the first time [these items] are on the menu,” Morse says. “They’ve been really accepting of the new foods. We know it can take many exposures for them to become comfortable, so it’s important to stay the course with menu changes and even do some student sampling a few weeks before introducing a new item. That helps build excitement.”

From Heavy Cream to Healthy Cauliflower

At the Denver VA Medical Center, the goal is providing good nutrition—and comfort—to the veterans being served there every day.

“And we’re also trying to train the veterans for when they go home, but they’re sometimes so sick, they’re not thinking of nutrition,” says Krista Jablonski, food operations manager.

However, one dish has been such a great spin on an old classic, it’s making a difference in how patients perceive healthier food. That dish is Broccoli Chicken Alfredo that uses purèed cauliflower in place of the traditional cream sauce.

“You’d never guess there’s cauliflower in there,” Jablonski says. “Plus, you’re not just taking away something, you’re adding something that’s nutritious.”

The dish was developed by Leslie Miller, R.D., food systems dietitian, who got the idea from Pinterest.

Recently, the Black Hat Chefs from Rex Health of Raleigh, N.C., visited the Denver VA Medical Center to help with training, plating and inspiration. They were impressed by this dish, and with their help, it’s looking even better than ever on the plate, with the chicken fanned out and brocc-oli used almost like a garnish.

Parlez-vous Francais?
The great old-guard French classics that defined the high-end culinary world and culinary education in the 1970s serve as inspiration for Nazim Khan, CEC, executive chef at Bryan Health, a multihospital system in Lincoln, Neb. When coming up with creative ideas, especially for catered events, Khan starts with a terrine or a quiche or even a crudité platter and then adds and subtracts different elements.

“The idea is to construct your food from a different angle—engage your customers by seeing food in a different way,” says Khan, who previously cooked at Virginia Tech and then in hotel dining before recently starting his current job. “That’s what good chefs do, you want to change your dynamic. If you’re thinking sweet, go to savory.”

He uses that principle with quite a few classical French all-stars:

Terrine: “This is very old-school French cooking,” Khan says. “It’s traditionally a paté or forcemeat, but now you can build it as a dessert or an appetizer.” This new twist works with goat cheese, bell peppers and eggplant, no paté necessary.

Quiche/tart: “A tart is almost always seen as dessert, but you could do a savory tart with braised short ribs and goat cheese (one of Khan’s favorite ingredients). You could call it a quiche because it’s an egg dish.”

Parfait: “What is a parfait? You need to ask these questions: It’s French for ‘perfect.’” So Khan’s vision of a parfait strays from the yogurt-granola-layer-and-repeat Americanized version. He makes his savory with mushroom and carrot purées artfully placed into a mold.

Crudité: Again getting to the root term, Khan takes crudité’s meaning “fresh from the garden,” and updates it. “Crudité is usually tomatoes, cauliflower, zucchini and broccoli on a platter,” he says, “but as soon as people touch it, it becomes a mess and you lose all the colors.” So for events, a shot glass or bamboo cone can make individual crudités that are prettier, and portable, too.

Tartar: “You think of something raw, like steak or tuna tartar, but why not do it with cucumber for vegetarians?” Khan asks. Using mandolines to get really thin pieces of veggies is a good trick for dishes like this.

Mousseline/roulade: Smoked salmon does double duty here, used in mousse form for an update on the classic mousseline (a whipped sauce like hollandaise) and rolled up in sheet form for roulades (anything rolled).