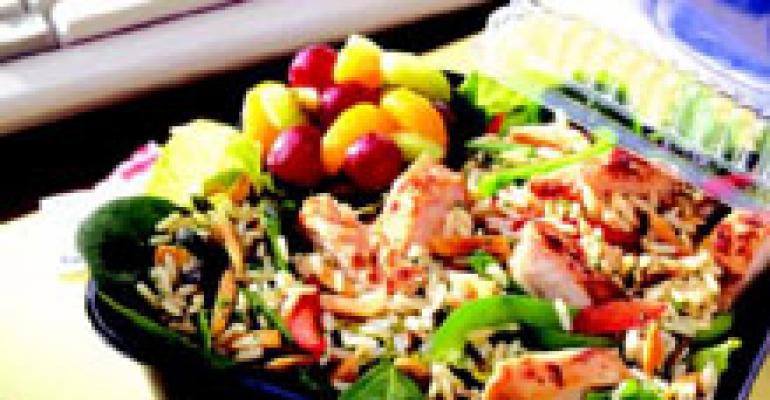 WHO DOESN'T LIKE CHICKEN SALAD? It's familiar, comforting and, frankly, hard to mess up. But beyond the traditional mayonnaise-based, celery-studded version that just about every menu offers, many operators are livening up their chicken (and turkey and duck) salads with such enticing ingredients as Southeast Asian produce, Latin spices, nuts and fruits, pungent dressings—you name it. The new poultry salads are popping up not just in sandwiches and on greens, but in wonton wrappers, on banana leaves, and in other exciting presentations.

Dazzling displays
At the University of California, Davis campus, students eagerly await Chef Emilio Lopez's Banana Blossom Salad that occasionally crops up on the menu as a special (see recipe). Made with shredded chicken breast or thigh meat, and boasting unusual ingredients such as banana blossom and rau ram (a peppery green grown in Southeast Asia), the salad has a Thai flavor profile, according to Sodexho Marriott's Nutrition and Safety Manager Linda Adams, R.D.

"Emilio brought back this recipe from a class at the Culinary Institute of America at Greystone, and the students absolutely loved it," she says. "With a dressing of peanut oil, garlic, fish sauce, lime juice, Thai chiles and just a bit of sugar, it's really fabulous."

The salad's unusual ingredients do tend to make it "a bit on the expensive side," Adams concedes, but "that's why it's on the specials calendar, and not the regular cycle menu."

Chinese chicken salad, a perennial favoritein many operations, got a presentation boost from the university's Director of Culinary Services Andy Burtis, when he came up with a simple but impressive way to serve it: between two fried won tons. "He just puts about a four-ounce scoop of the salad between the won tons, and it creates this crunchy sandwich that students go crazy for," Adams says. "When it's on the hot line, we can't keep up with the demand, it's so popular."

Just ducky
In the seemingly never-ending quest for something new to offer customers, ever think about trying duck? Not typical on many campus dining menus, duck has turned out to be a favorite among students at Canada's University of Western Ontario in London.

"I was surprised at how well students took to duck when we started menuing it," says Assistant Director of Restaurants, Operations & Divisional Purchasing Luis Samanica. "It's really flavorful, and students are always looking for new things. So we have it frequently now in salads and entrees."

A Grilled Duck Salad with Wild Mushrooms and Pancetta (see recipe), that Samanica originally created for catered events, is easily modified for regular menu use with button mushrooms and crispy crumbles of duck skin or regular bacon instead of pancetta, he advises.

She hit the jackpot. "We sell out of the salads every day, even though, at $4.50, they're the highest-priced item on the menu," she says. "We knew they'd be popular, but we didn't expect this great a response."

Potts attributes the success of the salads with boosting patron satisfaction scores. "We benchmark with HFM (Healthcare Food Service Management), and our cafeteria's overall percentage for customer satisfaction rose five percent after adding the black bowl salads and some other new menu items," she reports. "In the 'choices available' section of the benchmark, our scores rose 12 percent. We feel that the black bowl salads were the major reason for these increases."

A variety of chicken salads make up the bulk of the choices (joined on occasion by a hummus and tabbouleh plate and vegetarian spinach salad). They range from a southwestern style to Mandarin Chicken (see recipe), Tropical Chicken and Chicken Salad Vinaigrette. A cold chicken curry salad over fettucine noodles with carrots and peas is in the works.

"We focused on white meat chicken because you just can't go wrong with it," Potts explains. "It's got a mild flavor and you can put lots of other ingredients with it. Customers see it as being high quality and a very good value." In fact, Potts notes, "we spend most of out food dollars on chicken."

On the dark side
As far as Chef Dean Thomas of the New England Culinary Institute in Montpelier, Vermont, is concerned, use of dark meat poultry—whether in salads or other dishes—is highly underrated. "I really like to use the thighs and legs of turkey, duck and chicken," he says. " They are moister products than breast meat, and because they're under-utilized, the price is good, too."

Linda Adams at U.C. Davis concurs: "We make the Banana Blossom Salad most often with chicken thigh meat. This helps maximize the use of the students' food dollars, as the banana blossom itself is expensive. I think on campus, as a whole, white meat is more popular, although I can't determine if it's because of the fat content or stronger flavor of the dark meat. Personally, I like thigh-it's much moister and more flavorful."

In his Turkey Carnitas Mesclun Salad with Tangerine Vinaigrette (see recipe), Thomas brings his Southwestern roots to play in the slowly-simmered, "carnitas"-style shredded turkey thigh meat. Another particularly popular dark-meat poultry salad on the menu at the institute's Essex Inn is a duck leg confit with frisee.

To view the recipes associated with this article, click here: poultry salad recipes