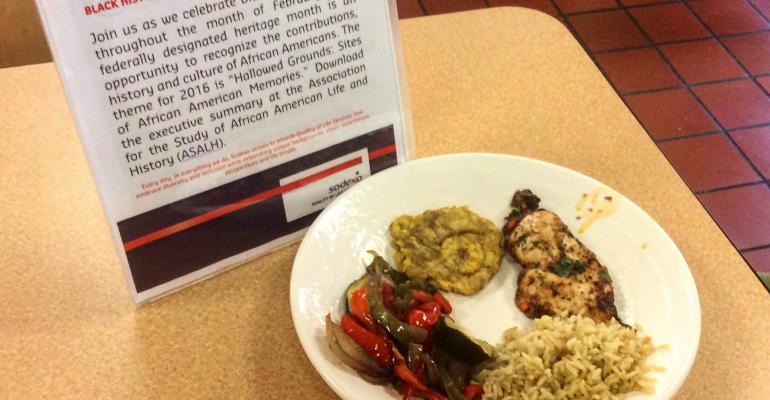 Dining services at Ramapo College of New Jersey collaborated with the Black Student Union (BSU) on a far-reaching menu that aimed to celebrate black culture from around the world.

For the lunch celebration of African Ancestry Month, the BSU was “adamant about not just highlighting the United States when it comes to black history, but highlighting a more worldly variety,” Sodexo marketing manager Julio Herrera told the student newspaper.

That variety included African, Caribbean and Latin American dishes, plus a few favorites from the American South, making for a menu that was “more well-rounded than just Southern food, which is what typically you would probably see,” Herrera says.

1.    For chicken: Combine oil and 2 oz. jerk seasoning for marinade. Mix until well blended. Pour marinade over chicken, turning evenly to coat. Hold refrigerated at internal temp 40°F or below for 1 to 2 hours to marinate. Drain and discard excess marinade.
2.    Sprinkle chicken with rest of the jerk seasoning. Bake in 300°F oven (or 250°F convection oven) until cooked through and internal temperature reaches 165°F.
3.    For rice: In skillet, heat butter. Add garlic and ginger, sautéing lightly. Add rice. Stir to evenly coat with butter. Add coconut milk, water and salt. Bring to a boil then reduce heat, cover and simmer until rice is tender and liquid is absorbed. At this point, rice may be cooked quickly and stored for later, up to 48 hours.
4.    For tostones: Place enough oil in skillet to coat the bottom. Heat over medium heat. Add plantains. Sauté on each side until lightly browned and softened. Remove from skillet and drain on paper towels.
5.    Using bottom of coffee cup or small press, smash each plantain chunk to about half the original thickness. Heat more oil in skillet. Add smashed slices and cook until golden brown. Serve immediately with chicken and rice.

Photo and recipe: Sodexo at Ramapo College of New Jersey