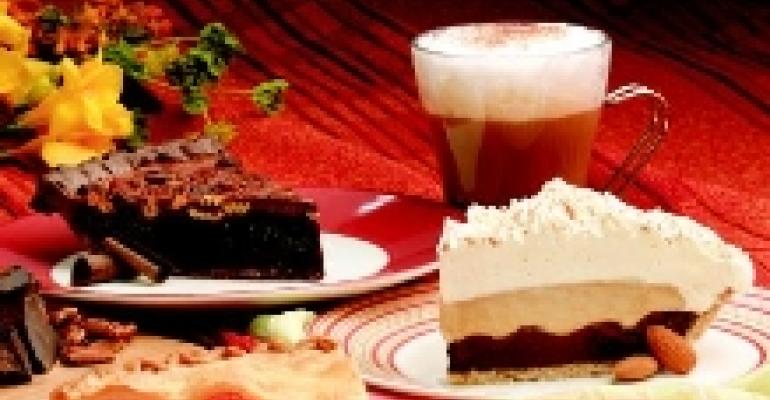 Chocolate remains one of the most popular dessert flavors— it's an essential dessert menu staple. Yet, today's onsite pastry chefs tell FM that on trendy menus, other flavors are rising in popularity.

Mouth puckering lemon, sensual vanilla, tantalizing tropicals and comforting apple (sweet, tart, chunky and smooth) are all becoming dessert sirens in their own right. (Never fear, chocoholics: we have two incredible chocolate recipes among those that follow, and are devoting a whole feature to that delicious little bean in the future!)

"The dessert 'trend' is to capture and keep customers with good flavor—it makes more of a lasting impression than anything else," says Randy Eastman, pastry chef at the Metropolitan Museum in New York.

"Repeat customers are a challenge to entice. You can try your hardest to be creative but in the end customers tend to choose what's familiar. And it follows that they want the flavors they love in fresh new combinations," says Eastman.

Desserts often steal the show and with a name like Ringling, customers can expect to be wowed! At the Ringling (art) Museum in Orlando, FL, slated to open this spring, Claude Broome, Guest Services area chef/executive chef for dining services there, does not clown around. He has developed refreshing fruit gelatos, sorbets and granitas they'll be featuring in the new dining room at the visitor center (though he did have a lot of creative fun!).

"There's a misnomer that gelato means gelatin—it means 'traditional,' explains Broome. "We're following suit with some classic Italian desserts for our likewise-themed restaurant." Broome admits that being in Florida has influenced his menu toward 'the tropical,' and that the Mango Sorbet and Champange and Rasperry granita recipes that follow pay homage to his love of classic desserts with a modern, fullflavored fruit twist.

Speaking of satisfaction, all the pastry chefs spoke enthusiastically about incorporating more healthful touches into dessert fare. Most are using more fruit—fresh, dried, poached, baked, roasted; and adding more spices, in their dessert mix. Additionally, they're continually developing and fine-tuning low-fat and low-sugar confections (using sugar substitutes in some cases) in order to duplicate—or even improve upon the flavor of high-calorie originals.

"Asian flavors have permeated the dessert scene, too," he says. "Fruits like lychee and mangosteen, and twists on healthy fruit sauces, such as the clever concoction of a blueberry ginger sauce, are popular now." For some wholesome " international" comfort, look to his Cuban Coconut Rice Pudding, made with non-fat milks and spiced with crystallized ginger, cinnamom and lemon zest.