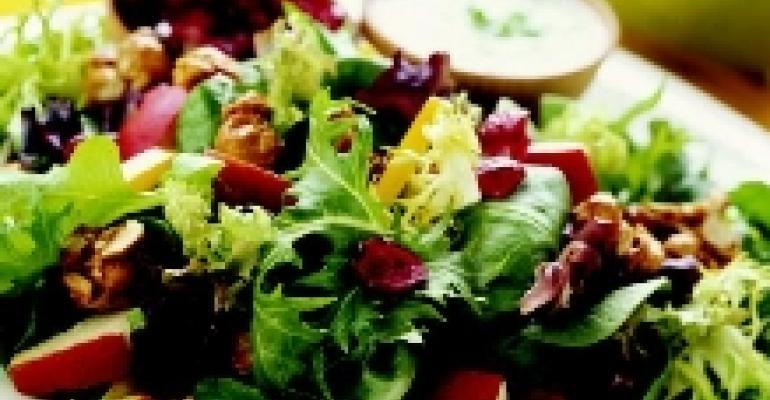 Whether selling for just over a dollar, or pushing the onsite limit with a $6+ price point, salads remain a top selling item on nearly every noncommercial menu. At the same time, the standard salads of times past—iceberg lettuce, carrot shavings and a creamy dressing—don't even come close to meeting customers' expectations today.

Even the most modest of salads now must sport some interesting lettuces, ingredients and dressing to make the cut. At Ohio State University Medical Center in Columbus, the "inexpensive" salad option, at $1.59, is nevertheless made with "a very high quality mesclun mix, tomatoes and feta cheese," says Director of Nutrition Services Julie Jones, M.S., R.D.

To the south, in Lawrenceville, GA, Gwinnett Medical Center's Cafeteria and Catering-Manager Laura Marrotta states that "for the most part, our customers want the basic salad options at a cheap price."

But just what's considered "basic" these days? That would be the facility's "Baby Blue" house salad, priced at $1.25, and composed of baby greens, blue cheese, strawberries, orange slices, toasted pecans and red wine vinaigrette. In the past, such a salad cropped up on occasion as a special, but "the demand was so steady, we turned it into a standard," Marrotta notes.

The deluxe treatment
If that's the new standard, then it's no surprise to find chefs scrambling these days to create even more imaginative and innovative versions for entrèe salads and special promotions.

In a program dubbed "Chef's Tour Summerfest Salads," Providence Portland Medical Center in Oregon blew the lid off customer expectations for salads this season with upscale touches in every aspect貿rom the presentation down to the preparation of spices.

Originally scheduled to last just six weeks after its May debut, the tossed-to-order salad program with hot protein elements will run until September, according to Assistant Director Tony Clifford. "Customer acceptance for this has been beyond our wildest hopes," he says. "We knew after the first week that it would go all summer."

The protein options beckon with their succulent-sounding names, from char sui pork to mint cilantro beef and tea smoked salmon. Housemade dressing choices (Thai lime, peanut hoisin, and pickled ginger and Mandarin orange vinaigrette) pull it all together. To ensurethe fullest flavors, VanRossum toasts whole spices and grinds them himself for use in the protein marinades and dressings.

At $5.95, the rotating themed salads have been a boon to business. They're featured in the Chef's Tour station, a spot that normally presents a new high end entrèe every day, with prices ranging from $4.95 to $6.50. "This program is providing some real consistency, since rather than having 60 to 80 customers paying within that price range each day for a new entrèe special, we now have 128 paying $5.95 every day for a tossedtoorder salad," Clifford explains.

What's more, there's the added savings benefit of offering the same ingredients all week long, enabling the chef "to get ordering down to a science." So many ingredient and topping choices allow customers to virtually create a brand new salad each day of the week, "but would the same entrèe item served every day continue to have the same interest level all week?" Clifford asks. "I doubt it."

And that includes the pizza program. Last year, as part of the company's limited time offer series, B&I accounts promoted salad toppings "as a fresh way to differentiate pizzas, especially in the summer, when there's lots of great produce available."

Individual pizzas are baked off first, then topped with a tossed-to-order salad mixture of marinated and grilled portobello mushrooms, arugula, feta cheese and red onions in a basil balsamic vinaigrette (see recipe).

"Customers really like that combination of hot and savory coupled with fresh, cold salad on top; it's a nice contrast," Mitchell says. "It's a premium item and customers are willing to wait in line for it."

Elsewhere on the menu, he notes, salads have popped up in the grill station (for hot protein-added salads); at the deli, which feature open-faced salad "sandwiches" on flat breads; and in the to-go case, where sales are steadily growing. "Including salad bar usage, salads probably make up 20 to 25% of the menu mix now," he estimates.

Packaging counts
At West Virginia University in Morgantown, made-to-order hot salads have " really caught on," according to John Birchman, marketing manager. But when dining services presented the Oriental salad in Chinese restaurant-style take-out boxes with chopsticks poking out the top, students responded even more heartily.

"They were very receptive and appreciated the extra effort we put into making it appealing to them," Birchman says. " Because of that, we're going to re-examine how we present salads, to tap into more of that excitement and personalize the rest of the salads."

Although attractive packaging is crucial, Sodexho Corporate Services has also been focusing on the labels that go on their Simply To Go packaged salads. "We listened to what customers were asking for, and decided to go above what's required," explains Mitchell. "Our new labels now have the item's name, nutrition facts and a complete ingredient list. The feedback is that this really helps customers make decisions in what salads they choose."

When even the simplest of salads now boast ingredients considered premium just a few years ago, and packaging rivals that of upscale commercial food emporiums, where can these menu mainstays possibly go from here? Wherever the trend leads, the next step in the continuing evolution of salads is sure to be creative and unexpected.