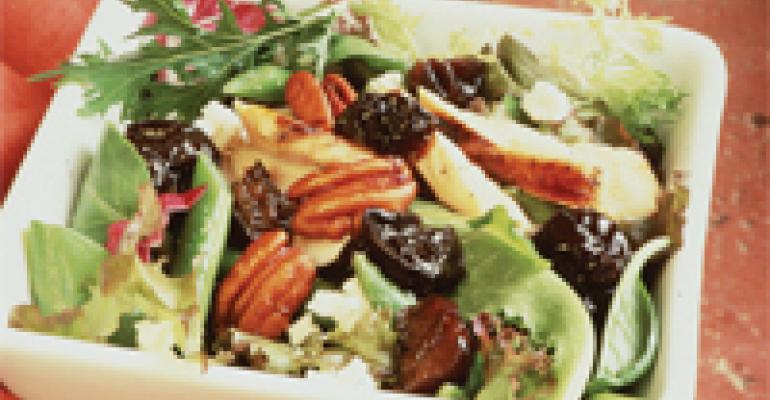 Salads sell, and these days, the biggerthe salad, the bigger the sale.

Who’d have guessed it? Perched right up there with the reliable menu money maker–fries, burgers, pizza–sit entree salads, having muscled their profitable way onto a growing number of onsite menus by offering customers just about everything they could ask for in a meal. After all, entree salads reward their consumers with plenty of perceived value, lots of flavor and texture combinations, a protein element, and the feeling that they’ve just done something healthy for themselves in a very delicious way that involved sacrificing neither taste nor satisfaction. What’s not to like?

At the University of Iowa, Associate Manager of Food Services- Iowa Memorial Union Barry Greenberg has offered entree salads in his cash operations for about three years now. But just this past January, he rolled out a new batch of “restaurant style” meal salads in response to customer requests. “We’d been hearing that there really was a need for this,” he explains, “and that fit in with our plans to upscale the salads in order to generate more income.”

The plan worked. Since unveiling the new and improved salads, Greenberg has noted a 30 percent increase in sales, while still keeping his food costs in line. The new salads average about $4.95 each, an increase of anywhere from 50 cents to a dollar more than customers paid previously. They’re still packed in the same disposable, covered salad plates for grab-and-go as before, except at one site, where salads are tossed to order at a display station.

The current entree salad line up, boasting 11 either all-new or refined-and-revamped recipes with extra ingredients, presents customers weekly-changing, tantalizing choices that range from Shrimp Nicoise and Chicken Caesar to Seared Salmon Salad, Garlic Shrimp Pasta Salad on Greens, Italian Chopped Salad, and two housesmoked turkey salad selections. Each grab-and-go version comes with either a bread stick or a roll, individually wrapped, and dressing packed on the side. Greenberg expects to substitute in new salads about four times a year, as the seasons change. “For the warmer weather, we’re going with more fruits in the salads, and utilizing local produce as much as possible,” he notes.

To try out a little different merchandising approach, Greenberg purchased a reach-in, open-air cooler for the salads in one location. That resulted in the salads’ “flying out of there,” he claims. So positive has the response been, that Greenberg plans to switch to more open-air coolers in additional units. “It helps them move more quickly,” he explains. A full entree salad training guide he developed, which features a digital photograph of each salad along with the recipe, ensures uniform consistency week after week.

Greenberg thinks he’s hit upon a winner with the upscaled entree salads. They sell better, provide a healthy choice, and give his foodservice team “another chance to display our culinary skills.” As far as the future of the salads goes, he sees them sticking around for quite a while. “They’re just so flexible; plus, I think we’d really hear about it if we ever tried to do away with them now.”

For John Whitlatch, executive chef at the HDS Services-operated Ingham Regional Medical Center in Lansing, MI, entree salads are crucial to the financial success of his menu. Out of an average 500 to 600 meals sold per day through the center’s cafeteria, 200 to 230 of those will be entree salads. “They’re really a big percentage of our sales, and they’re good money makers, too, especially when you’re doing a high volume,” he says. “Entree salads have got a lot of perceived value, and they enable us to offer more choices, which is important in a tiny hospital cafeteria. They also make great monotony breakers.”

Whitlatch currently rotates a repertoire of eight different entree salads, ranging from Salmon Caesar and Steak to Chicken Tender Salad, a strawberry spinach specialty, and The Big Salad, a knockoff of the famous concept obsessed over by Seinfeld sit-com characters. Prices vary, depending upon what Whitlatch is paying for produce and protein items at any given time, but customers don’t seem to mind. “They’re understanding about that, and know it’s our procedure,” he explains. “Besides, when the salad prices fluctuate, it’s really only a matter of nickels or dimes.”

Teaching customers to accept that way of doing things has allowed Whitlatch to keep his food costs steady. If necessary, he might also cut back on the protein portion (say salmon, for instance) from six ounces to four ounces. But with prices that top out at about $3.35 for a full meal salad, customers feel they’re getting plenty of value, no matter what.

A weekly “upsell menu” debuted at a new facility on the Cornell University campus in Ithaca, NY, last fall to rave reviews, prompting the addition of upscale entree salads to the line up in January. Dubbed Star Choice, the menu achieves the goal Executive Chef Anthony Kveragas describes as “our attempt to get more interactive with students, and to offer them the opportunity to have something nicer than usual.”

To partake of the special menu, offered only at dinner, students swipe their meal cards to get into the dining facility (those not on a meal plan pay the normal $10 all-you-can-eat price), then pay an additional charge, usually $5.95 or less, for the Star Choice signature fare.

Kveragas reports that the menu has caught on with professors, too, who often bring in guests or student groups for “discussion” dinners. Served on oversized, 16-inch oval plates, the salads are all made to order in front of the customers. “These are actually larger portions that you’d even get in a restaurant,” Kveragas asserts. Diners’ reactions are exciting to see, too. “Some are just astonished by it. We’ve had others come in who aren’t even on the meal plan but have heard about it and want to see it and taste for themselves.”

Not designed as a money maker in and of itself (“it’s basically priced at our cost,” Kveragas says), the program is “very impressive, and makes good P.R. for us,” he notes. By charging extra for the special menu, it becomes a viable example of how colleges and other operations with fixed meal plans can afford to offer upscaled presentations to satisfy customer demand.