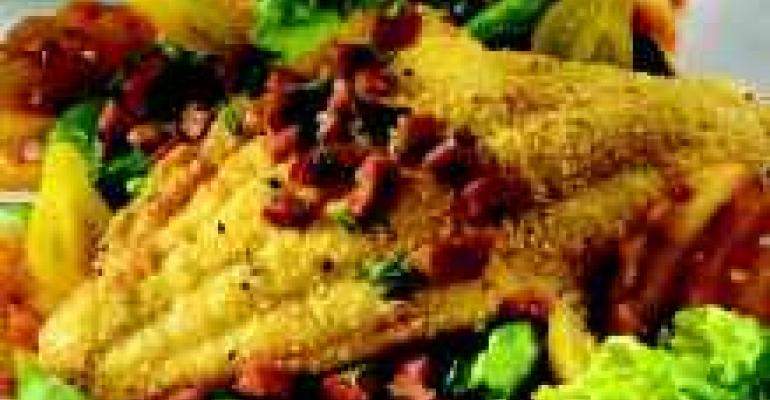 Last fall, when Thomas Long began preparing a menu for the first catered doctors' dinner in his new position as Sodexho's executive chef at Holy Spirit Hospital in Camp Hill, PA, he knew just what to use to grab attention and garner favor with his guests: seafood.

"I started them off with blue crab 'shooters' as a passed hors d'oeuvre," he explains. "But instead of using standard shot glasses, we took little plastic, individual medicine cups with measuring lines along the sides (there are plenty of those around here), and added one to two jumbo lumps of crab meat per cup, a sprinkle of Old Bay seasoning and a little dollop of cocktail sauce," he said. A mini wedge of lemon rested on the edge of each cup, and two choices of hot sauce on the trays allowed guests to spice up the morsels even more.

The guests loved the inside joke, and especially appreciated the treat of succulent chunks of seasoned crabmeat. "They really ate them up," Long says. "We got lots of compliments on that hors d'oeuvre, and for something with such an upscale perception as blue crab, we were able to make it cost effective. By using that particular presentation, we got about 30 portions out of each pound."

Fish friendly
In the Pacific Northwest, it's no surprise to find plenty of seafood-loving consumers. But University of Washington's Executive Chef/General Manager Jim Warner was amazed to discover just how receptive to creative seafood presentations students could be.

"It's gratifying to see that students are pretty open to new and different ways to serve it," he notes.

Just some of Warner's innovative approaches include a warm, honey-glazed prawn cocktail (see recipe p. 60); Barbados-style grilled fish with mango salsa; seafood pot au feu; paella; whole salmon with an apple/fennel/caramelized onion stuffing; fish wrapped in banana leaves and grilled; and a salmon salad made up of long strips of salmon curled into a spiral, skewered, seasoned with spicy orange marinade, roasted and served with greens.

Warner finds one particularly economical way to menu seafood is by using trimmings, which he and the other campus chefs purchase from a local fish supplier, who keeps them on hand for the university. "You can get a much more reasonable price that way," he explains.

With mahi mahi trimmings, which yield "some pretty big pieces of fish," Warner will create grilled croquettes, pairing the fish with vegetables and fruit on a skewer. Or he'll add the cooked pieces to the self-serve salad bar as a surprise treat. Tuna trimmings turn into fresh tuna salad, and after saving up enough salmon trimmings, Warner will feature salmon cakes made with sweet corn, spinach and pimiento.

To add an eye-appealing twist, she comes up with such treatments as maplewoodsmoked trout in a Cobb salad; panfried catfish spiced with andouille vinaigrette, served on greens with potatoes (see recipe p. 62); chimmichurri-rubbed albacore on a bun; cornmeal-crusted catfish, trout or tilapia served in a wrap; or tilapia in a Thai red curry sauce with vegetables and coconut milk.

"Whenever I try something new, I always give some away for customers to try; it's the best way to win them over," she says.

Prep tips
Luis Amado, chef/instructor of international cuisine at Baker College in Muskegon, MI, teaches a cardinal rule to his students regarding seafood: don't over salt it. "Seafood has a natural flavor, and doesn't need much salt," he emphasizes. "If you put on too much, it gets dry. Instead of over-seasoning the fish itself, think instead of good accompaniments to go along with it-chutneys, sauces and salsas for extra flavor and moisture."

Raquel Rosen, food and nutrition manager at the Allen Pavilion Community Hospital for New York Presbyterian in New York City, agrees. "Seafood is a surprisingly good seller here; when it's on the menu, it will make up 30% of the protein sales that day. But no one wants it if it's dry," she says. "We make sure to batch cook, and steam most of the fish to help it retain texture and appearance; there's less reduction of weight that way."

Rosen also notes that using a thin, vegetable-or chicken-stock-based sauce helps to maintain moisture. "When you use a soup base in the sauce, you get lots of added flavor without extra calories, plus you don't have to use oil or butter for additional flavoring. Then just dress up the fish with colorful peppers, tomatoes and herbs to make it look spectacular."

Holy Spirit Hospital's Chef Long cautions against thawing seafood under running water. "Fish is like a sponge and will soak up water," he explains. "It should be slacked out under refrigeration if at all possible. If it must be thawed under water, then be sure to put it in a bag and tie it off. Never have it sitting in the water; it will lose its flavor."

And when you've gone to the trouble to make a delicious crust for pan-fried fish, Long says to "make sure the pan is really hot and don't crowd the fish. No pieces should touch at all. If they do, that will start a steaming process, which lowers the temperature of the fat. To get crunchy, the crusted fish must have the fat surrounding it."

When broiling fish, Long throws a couple of ice cubes on the broiler pan to provide "just enough moisture so the pan won't burn."

A flavoring tip University of Washington's Chef Warner shares is to add a touch of honey to fish stocks and sauces to enhance the natural sweetness of fish and seafood.

He also recommends setting a weight on top of frozen shrimp and scallops while thawing. "That will press out the water and the seafood will have much better flavor," he says. "We set them on a perforated sheet pan, put one more pan over the top, and place cans of olive oil on top."

And the secret to his popular salmon cakes? "Add a little baking powder?it makes them rise." Serve with a little aioli, and customers will sing their praises.