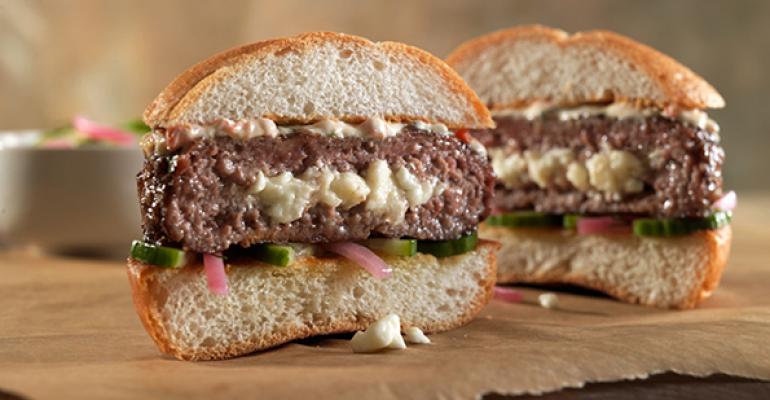 <p>This Mediterranean Lamburger has a cheesy surprise inside. The pickled onions and cucumbers add another on-trend dimension.</p>
Menu Trends

It’s burger time. The “better burger” trend has been growing from coast to coast, with lines forming at cool burger concepts, burgers making headlines in the stock market and the opportunity for creating better burgers and beyond. Let’s just say there are more burger ideas hitting the griddle now than ever.

At the recent Menus of Change summit at The Culinary Institute of America’s (CIA) Hyde Park, N.Y., campus, the focus was on healthy, sustainable and delicious food choices. During the summit, which was attended by about 350 chefs, academics, scientists, food manufacturers and suppliers, a Burger Bash event proved that burgers can check all of those boxes.

Blended and Better
Blended burgers were grilled to perfection and topped with global ingredients, bringing to life a research study on the “protein flip” done by the CIA in conjunction with the University of California, Davis and the Mushroom Council.

Anne McBride, culinary programs and editorial director for strategic initiatives at the CIA, presented a session at the summit called “The Burger Reinvented,” focusing on how a traditional burger made with a small quantity of meat blended with grains, legumes or vegetables with a focus on flavor can lead to a healthier profile.

“We like to show examples of what we’ve put on paper,” McBride says. “We surveyed chefs as part of the study, and many of them do offer alternative burgers, so that’s very promising. And we’re not just telling them they should blend with mushrooms or use something other than red meat, but we’re showing them, here’s how good it can taste.”

Mushrooms seem to be the go-to when blending plants with meat in burgers, with their meaty texture and umami flavor, but they’re just the beginning in terms of what you can do, McBride adds.

“Mushrooms are the gateway blend,” she says. “From there, you can start showing people how to blend with things like cauliflower, which also makes for a really great texture.”

Also at the Burger Bash, a caramelized cauliflower-chicken burger was topped with sweet tomato jam and “fava ghanoush” (a take on baba ghanoush, with the addition of fava beans to the traditional eggplant). Other burgers at the bash featured combinations of salmon/crispy leeks, peanut/mushroom/farro, lamb/eggplant and black bean/ancho chili.

McBride hopes attendees came away with the idea that a blend of protein and plants can become the norm for burgers.

“It’s important to not think of them as an alternative, as foodservice operations tend to do,” she says. “Don’t deceive your customers, but just make it healthier and don’t menu [blended burgers] as alternatives.”

Sodexo’s K-12 division has also been working with the CIA and the Mushroom Council on another healthy menu initiative that focuses on the power of blended burgers, something Lisa Feldman, director of culinary services for the Sodexo Education Offer Development Center, says is not a hard sell with kids at all—they either don’t notice the added mushroom or are happy about it.

It’s been so well received, Sodexo is in the process of switching out their “spec burger” for all K-12 accounts to a mushroom blend.

“We need to give the kids more credit,” Feldman says. “One of the reasons it was so successful when we tested this at the high school level was because they understood that by reducing part of the meat with mushroom you’re reducing the carbon footprint and that really resonates with them. And it’s not a hard sell for parents. This isn’t a manufactured product; it grows in the earth and you’re improving the nutritional quality of the burger.”

Hashtag: #betterburgerproject
Similarly, at the University of Southern California (USC), a big deal isn’t made of the fact that many burgers at several concepts are one-quarter mushroom.

“The concept of the ‘protein flip,’ if you think about the way the rest of the world eats, it’s a little bit of meat and then getting more protein from non-animal sources,” Ernest continues. “The mushrooms tend to become very neutral depending on how you cook, blend and season. So it’s versatile.”

All summer, USC Hospitality has been participating in the James Beard Foundation’s Better Burger Project, a nationwide contest and challenge for chefs to make a “better burger” by way of blending with mushrooms.

USC has several high-end on-campus restaurants, and each has been offering new blended burgers: a chicken and waffle burger at Mc-Kay’s; a beef-chorizo-mushroom duxelle burger at The Lab Gastropub; and a Kobe beef-porcini-crimini burger at Moreton Fig.

The Better Burger Project’s competition is based on Instagram posts, so when guests sit down at the restaurants, servers encourage them to take Instagram photos and hashtag them #betterburgerproject. The chef with the most Instagram posts will be whisked away to the James Beard House to cook his burger.

Ewe Should Try a Different Protein
Ground lamb pressed into a juicy patty and sizzled on a smokin’ hot grill has a flavor like no other protein. Grassy and wild, distinctive and savory in all the right ways, lamb in general doesn’t need much more than the clean flavors of herbs and aromatics.

Lamb isn’t just for restaurant menus. A lamburger has been offered at the retail cafe to staff, family and employees at Stanford Hospital. Jesse Cool, a chef and teacher, has been a practitioner of sustainable agriculture and cuisine for decades in California. In fact, she opened the first organic restaurant in Menlo Park, Calif., before most people had even heard the word “organic.” She’s responsible for creating that patient menu, which is called Farm Fresh.

“A big part of the concept is to use more fresh herbs and vegetables with meat so that we can use higher quality local meat products,” Cool says. “We use about 5 ounces of lamb with various fresh herbs and layer on caramelized shallots for a boost of flavor.”