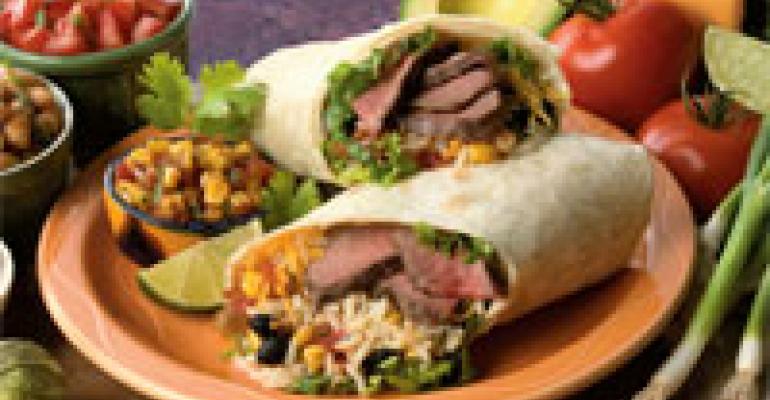 Savvy onsite operators are looking for fresh, authentic ingredients, simple preparation methods and&#8212; as always&#8212;value for their customers.

Mexican cuisine is coming of age in America. We’re finally starting to get it—moving beyond the ubiquitous taco/nacho combos and reaching out to embrace more authentic Mexican fare, with its emphasis on the freshest regional ingredients available—often served to order.

A few years ago, most Americans, including foodservice professionals, might never have even heard such standard Mexican culinary terms as mole, chipotle or poblano. Credit the burgeoning Hispanic population—now the largest minority in this country—the explosion of Latino cultural influences from music and film to fashion and fine art and the success of Fresh/Mex restaurant chains like Chipotle and Baja Fresh for this increased awareness.

For onsite venues, bold flavors, colorful presentations and modest price points attract the customer while simple preparation methods and low food costs spell profits for the operator. FM spoke to a sampling of directors and chefs, from large contract accounts to small self-ops. They all echo the same basic sentiment: make it fresh, make it simple, make it real, and they will come....

They’re also coming for his Red Snapper Veracruzano—fresh red snapper marinated in achiote, pasilla peppers, garlic and citrus, topped with roasted red peppers and garlic sauce. And they’re coming for his Carne Asada Chimichurri Steak and his whimsically- named Three Amigos in a Blanket (three homemade tortillas filled with either grilled certified Angus beef or chicken, marinated in fresh herbs and garlic, and topped with fresh pico de gallo). A native of Guanajuato in central Mexico, Arredondo has observed the evolution of American acceptance/adaptation of Mexican cuisine with a mixture of pride and practicality.

“I recently participated in a panel on Latin food at a conference attended by a large number of onsite operators from colleges and schools,” he says. “They wanted to see more of the authentic items, more regional dishes. The challenge is that ingredients can be harder to source, especially up north. But other things like homestyle tortillas are now readily available commercially. You don’t have to spend $10,000 on a tortilla maker or employ five workers in the back to make them by hand.”

The Rio Grande Burrito promotion features what Carr describes as “Chipotle-style burritos” where all the elements are set out and the customer specifies his own 14-16-oz. burrito using a combination of protein, rice, beans and garnishes.

“Are we authentic?” ponders Carr. “We have authentic elements. Currently we’re investigating whether we want to bring moles (a complex, heavenly sauce but highly labor intensive—see glossary sidebar) into the mix. Can we pull it off from a skill set?

“For example, we learned European cooking techniques which are quite different from Mexican techniques. It’s very different balancing a European-style sauce, for example versus a Mexican-style sauce. If, when making a European-style sauce I make it a little too sweet, I can balance it with sour; if it’s a bit salty, I can tone it down with a root vegetable. But if my mole is too sweet, I have to balance it with more heat and then I risk it turning bitter, and once it goes bitter, it’s very difficult to get the sweetness back up. It’s just a whole different style. There is a prototype commercial mole out there, but I think we need a good one on the market to get over the hump.”

Also, Americans typically don’t think of seafood when they think of Mexican cuisine, and that’s a huge part of their cuisine. “It’s a learning curve and we’ll get there,” predicts Carr.

Continue to next page

Besides, suggests Carr, Americans don’t really want authentic, just elements of it. “They like certain authentic ingredients and they like to think they’re eating something from Yucatan, for example, but they wouldn’t really want to eat like they do there because some of the things there are very different. When I was in Mexico I had escamole—giant ant eggs-and they were very good! Very buttery and served in a chile oil on a fresh tortilla with guacamole on the side, about the size of a cooked barley.”

“The majority of our patients and employees—about 85-90 percent, are Hispanic, so we serve the same home-style food they’re accustomed to, from scratch.

“For example, at breakfast we offer scrambled eggs with pico de galo and onions in a floured tortilla. At lunch and dinner, we offer fajitas, chili verde con carne, barbacoa beef, carnitas and fish Vera Cruz style—prepared steamed with onions, garlic and pico de gallo (see recipe this page). Other specialties include chiles relenos, Spanish rice and a fabulous flan.”

Martinez credits his dedicated staff (the “newest” cook has been with Thomason for eight years) for the consistency in both food and service. And he proudly credits his cuisine with helping the hospital earn a whopping 99 percent in its Press- Ganey scores in the foodservice category the past several years.

It helps, of course, that upon admittance, patients are seen by a nutritional care assistant to ascertain their dietary preferences. If they don’t prefer any dish on the standard menu, they have the option to order from the cafeteria menu, which typically offers three to four entrees. In addition to the many Mexican menus, there is always a more Americanized dish available, such as roast beef, grilled chicken or pork chops.

“I see Mexican cuisine evolving in that it’s prepared healthier now—not as much fat is used and we’re using leaner meats,” says Martinez. “Diabetes and elevated cholesterol are big problems for many people and we’re addressing that by doing things like using only canola or olive oil in our cooking.”

But more operators are jumping on the Fresh-Mex bandwagon, with successful results. And some, like the University of Maryland, are incorporating more authentic recipes into their regular dining menu.

“We have a self-branded concept called Sé Wrappe,” says Karen Tomas, Foodservice Facility Manager, Texas A&M University, College Station, TX. “It’s a Tex-Mex menu infused into a wrap concept. We serve 500 customers a day and it’s been very successful. We spice up beef and chicken fajitas with Cajun and southwestern seasonings, peppers and onion. People down here want hot and spicy. It’s a big sandwich—between a pound and a pound and a quarter item. With food costs ranging from 18 percent (for the vegetarian version) to 40 percent for the others (the sandwiches retail from $4.50 to $6.25) it’s a value. We tripled the business from the previous concept.”

The University of Maryland’s (College Park) Jalapeno Grill is a similar concept to SéWrappe. “The fresh burritos we offer sell like hotcakes!” says Larry Donnelly, assistant director. “It’s one of the most popular concepts I’ve seen since I started here in 1968. We’ll get 400 customers in a three-hour period. Basically, we offer a 22-oz. burrito, modeled on the Chipotle concept where customers customize their burritos. It’s easy to put together, the lines move fast and it’s not labor intensive. We have one person who comes in to prep the meats, beans, rice and vegetables, and up to five on the line during the rush. It really is a fun atmosphere. We’ll play Latino music and dance along the line. It’s so popular we’re thinking of expanding it to the football stadium concession area.”